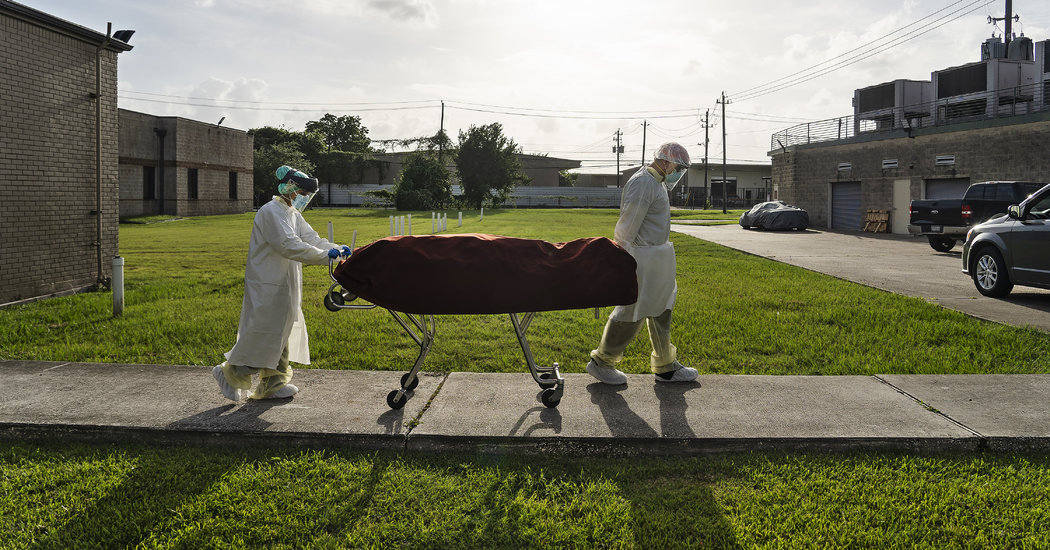 Good morning. The mayor of Seoul has been found dead. Joe Biden lays out his economic recovery plan. And virus deaths have been rising again.

The number of Americans dying from the coronavirus has started rising again.

More than 800 have died in each of the last three days — a three-day total that’s about 60 percent higher than during the same three days last week.

(The chart above doesn’t yet include yesterday’s number, which would add a third large gray bar on the right side.)

The spike reverses what had been the one positive virus trend in the U.S.: Deaths had been declining since mid-April, even as the number of confirmed new cases held fairly steady in the late spring and then surged over the past several weeks.

How? Older Americans have been especially cautious, which has led to declines in the average age of new patients; younger patients die from it less often. And doctors and nurses have become better at diagnosing the virus earlier and treating it effectively.

President Trump and his aides have repeatedly highlighted the decline in deaths and said it showed that the virus was in retreat. But many epidemiologists have disagreed, saying that the surge of new cases since mid-June was so large that it would eventually lead to more deaths. (In a typical fatal case, a patient dies three to five weeks after getting infected.)

It’s too soon to say for sure, but the last few days suggest that the experts’ prediction is starting to come true.

Deaths have begun to rise across many of the same Sun Belt states where the numbers of cases are increasing. California and Texas reported a daily high in deaths earlier this week. Florida and Tennessee did so yesterday.

“Several months ago, I warned of a potential tsunami if we did not take this more seriously,” Richard Cortez, an official in Hidalgo County, in southern Texas, said. “The tsunami is here.” Nationally, the number of new cases hit another record yesterday. (The Times is tracking the latest virus news here.)

Among the victims: Richard di Liberto, the son of an immigrant bricklayer and the chief of photography at the Frick Collection in New York. The Times has a running series on people who have died from the virus, “Those We’ve Lost.”

The Supreme Court ruled that prosecutors in New York will be able to inspect Trump’s financial records, with both justices named by Trump — Neil Gorsuch and Brett Kavanaugh — joining the seven-member majority. In a separate decision, the court ruled that Congress cannot see the records, at least for now.

What are prosecutors looking for? Susanne Craig, who has reported on Trump’s taxes for years, says investigators are trying to figure out whether Trump violated campaign finance laws when paying hush money to two women, Karen McDougal and Stormy Daniels. “This could go on for months,” Susanne told us. It is “unlikely that we will see the president’s taxes as a result.”

Thursday’s other decision: The court also ruled that much of eastern Oklahoma falls within an Indian reservation, which weakens the state’s jurisdiction over Native Americans in criminal matters. Gorsuch, a Westerner who has sided with tribes in previous cases, joined the four liberal justices in the 5-to-4 decision.

Record-breaking rains this week in the south of Japan have killed 62 people in floods and landslides. The extreme weather is highlighting the vulnerability of nursing homes: Floodwaters killed 14 seniors in one nursing home.

The disaster represents a “collision of two powerful forces shaping the country’s present and future: demographic change and global warming,” The Times’s correspondents in Tokyo write. Torrential rains in Japan have intensified in recent years because of climate change, and the country has the world’s highest proportion of elderly people.

The mayor of Seoul, Park Won-soon, has been found dead. He had disappeared a day after a secretary in his office told the police that he had sexually harassed her since 2017. The story has been shocking to Koreans because he had been a rare champion of women’s rights among the country’s politicians.

For decades, advocates of freer trade have been saying that the middle class would benefit from an open global economy. But as the U.S. has liberalized trade and welcomed China into the international marketplace, the incomes and wealth of most Americans have grown painfully slowly. (This chart offers a glimpse.)

We’re now experiencing the political backlash, as Joe Biden’s first detailed economic proposal makes clear. In a speech at a Pennsylvania factory, Biden moved away from the Democratic Party’s recent emphasis on open trade and called for the federal government to spend $700 billion on American-made goods in technology, clean energy and other sectors. He called it an investment “not seen since the Great Depression and World War II.”

The political angle: “They are essentially trying to steal the Trump program of 2016 and steal that playbook,” Steve Bannon, the former Trump adviser, lamented, as The Washington Post reported. “For some reason, the White House and the campaign have been caught flat-footed.” And The Times reports on Trump’s struggle to define Biden politically.

The Biden economy: In a column for this weekend’s Sunday Review, I imagine what a post-coronavirus economy will look like — under both a Trump second term and a Biden presidency.

IDEAS OF THE DAY: V.P. edition

In previous newsletters, we’ve written about Kamala Harris, Tammy Duckworth and Elizabeth Warren as vice-presidential possibilities for Biden. Today, I want to tell you about a few other candidates — and who’s making the case for them:

More on the veepstakes: Duckworth has written an Op-Ed for The Times, responding to the attacks on her by Tucker Carlson, the Fox News host. She calls them an effort to distract the country from Trump’s performance as president.

Krewe is a restaurant in the small Central Minnesota city of St. Joseph. It’s the brainchild of Mateo Mackbee and Erin Lucas, a couple who moved from Minneapolis two years ago to overcome career obstacles in bigger cities and to spread awareness of racial inequities.

St. Joseph is more than 90 percent white, and locals say the restaurant is the city’s first Black-owned business. Read the story of how the two chefs are using their food to promote diversity.

(And while it’s a departure from the traditional New Orleans gumbo served at Krewe, this recipe for black-eyed pea and pork gumbo is also delicious.)

Our weekly suggestion from Gilbert Cruz, The Times’s Culture editor:

Since I am home with my child all day every day for the foreseeable future, I need a few things that the whole family can watch together and enjoy without fear of bad language or violence or anything approaching “serious.”

The Netflix series “Nailed It!” is one of those shows. A reality competition series in which amateur bakers make and decorate devilishly intricate desserts, “Nailed It!” is named after the exclamation said bakers have to make when they unveil their inevitably cursed looking creations.

It’s that moment that elicits the most laughter from my family. These cakes often seem like they are genuinely in pain, and the faces made by the comedian Nicole Byer (who co-hosts alongside the pastry chef Jacques Torres) are eminently GIF-able. It’s a cooking show you can binge without ever feeling hungry afterward.

The actor Steve Martin has written a tribute to his late friend Carl Reiner, the comedy director whom he met while making “The Jerk” in 1979. The pair would go on to have near daily lunches for a period of five or six years.

Among Reiner’s life-lessons? “He taught me about modesty,” writes Martin. “I called him late one evening to discuss the next day’s shooting. I asked, ‘Am I interrupting you?’ He said, ‘No, I’m just lying here going through a litany of my failures.’”

Or try this week’s news quiz.

You can find all of our puzzles here.