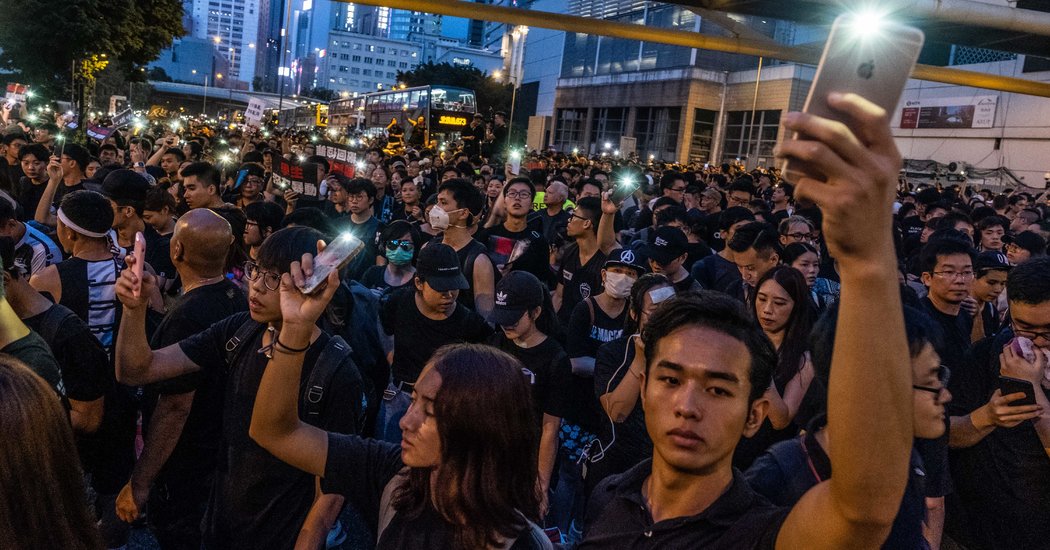 Individuals, as well, have taken to self-censoring. Many have taken down posts, removed “likes” for some pro-democracy pages and even deleted accounts on platforms like Twitter, according to activists. Fears that WhatsApp would hand over data drove a spike in downloads of the encrypted chat app Signal. WhatsApp, though, had no recent data requests from Hong Kong police, according to a person familiar with the matter.

People in Hong Kong have also quickly embraced the types of coded online speech that flourish in China, where internet police and censors patrol the web. One slogan, which the authorities have said could be illegal, was changed from “liberate Hong Kong, revolution of our time” to “shopping in Hong Kong, Times Square,” a reference to a local shopping mall.

In other cases, posters abbreviated the slogan based on Cantonese phonetics, writing simply “GFHG, SDGM.” The unofficial anthem of the protests, “Glory to Hong Kong,” has had its lyrics converted into numbers that sound roughly like the lyrics. “05 432 680, 04 640 0242,” goes the opening.

Companies, meanwhile, have the option of shifting data away from Hong Kong. Lento Yip, chairman of the Hong Kong Internet Service Providers Association, said he noticed an uptick in businesses relocating servers out of the city in June, though he wasn’t certain about their motivations.

“From a business aspect, some websites or content providers might just move to other places. It doesn’t cost much and it’s pretty easy,” Mr. Yip said.

For companies like Amazon and Google, which have large data centers in Hong Kong, such a move would be neither cheap nor easy. And their other options are equally complicated.