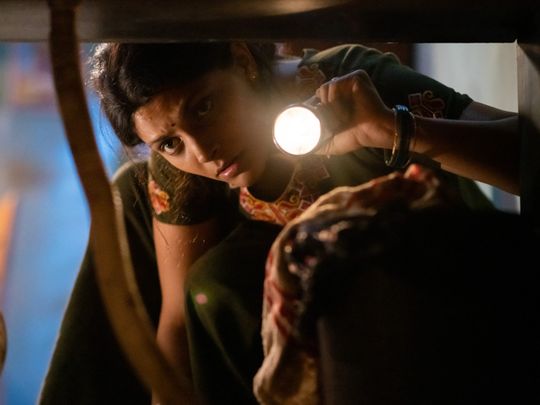 Director Anurag Kashyap returns to the big screen with a thriller set against the backdrop of the 2016 banknote demonetisation that rocked India.

Here are 10 things to know about ‘Choked’, gleaned from our interviews with the lead actors …

1. Director Anurag Kashyap is back in the director’s seat with his thriller ‘Choked’ featuring Saiyami Kher and Roshan Matthews in central roles.

The movie takes you into the world of middle class Mumbai suburbia, where a cash-strapped married couple — Sarita and Sushant — struggle to live comfortably. Money is scarce and their patience for each other is running thin, but what happens when their broken sink starts coughing up wads of illegal money?

“‘Choked’ explores a marriage about a couple who fall in love with each other very early in their lives, but life happens to them. Sarita has to give up her dreams and their relationship starts turning sour … Anurag is known for capturing the middle class Mumbai,” said Kher in an interview with Gulf News over the phone.

2. Kher, who made her Bollywood debut with Rakeysh Omprakash Mehra’s romance ‘Mirziya’, says this movie and her character offered her a lot as a protagonist.

“When money starts coming out of her sink, she goes through greed and sincere happiness. There was so much to play with my character Sarita and the movie rode on her shoulders … Sarita is very real. She is strong, yet insecure,” said Kher.

3. If you are in the mood to watch strong, empowered and conflicted characters, then ‘Choked’ is right up your street.

“The women in Anurag’s films are always strong and they have such strong opinions. Look at films like ‘Manmarziyan’ or ‘Dev.D’ … our generation has grown up with his brand of strong films. They are dark and wonderfully dysfunctional,” said Kher.

4. Kher describes her director Kashyap as a 14-year-old child who is constantly jumping around in excitement and trying to make flawed characters appealing.

“Anurag celebrates the flaws in all his characters. He has this unique ability to play with them … Think about it, Sarita can’t walk out her marriage because her middle class values don’t allow her to. They are having money issues, but she still hides the money that comes out of her sink from her husband, although she shares it with her partner,” said Kher.

5. Apart from Kher sinking her teeth into Sarita, there was South Indian actor Roshan Mathew who got the role of his lifetime with ‘Choked’.

In a separate interview with Gulf News, he said that he didn’t audition for the role of Sushant. Director Kashyap saw his bilingual film ‘Moothon’ and was impressed with a particular scene set in Lakshadweep. Kashyap was involved in the editing of that Malayalam film.

“He asked my ‘Moothon’ director Geetu Mohandas who I was and asked me to get in touch with him. We had a brief conversation where he asked me if I could handle Hindi. He didn’t ask me for proof or anything … But I was in Mumbai in 2014 studying drama and stayed there till 2016. So I did a few ads and web series … Just like me, Sushant is a migrant from South India,” said Mathew.

6. Both Kher and Mathew believe that web platforms have given actors a new lease of life.

“It’s not just about commercial success and you are cast here based on your talents. It’s not star-driven and I am so happy that OTT platforms like Netflix has give us actors like Roshan and me such golden opportunities,” said Kher.

7. Mathew and Kher aren’t married in real life, but they relied on their director’s brief and the marriages that they have observed.

8. Mathew, who’s one of the rising stars in Malayalam cinema with stirring films such as ‘Kappela’ and ‘Koode’, found ‘Choked’ appealing as the movie did not become preachy at any point.

“A film is effective and works for me when a movie doesn’t lecture me or tell me what to think. Through our fight scenes as a couple, it becomes evident what is right or wrong … Our flaws as a couple and individuals are highlighted through those conflicts. A lot of us are flawed and we would be able to see a reflection of ourselves in some of the scenes,” said Mathew.

9. Mathew’s character Sushant is borderline emasculated. He’s not able to keep a job for long and it’s his wife who is a consistent earner. The reversal of gender roles takes a toll on their marriage, where popular belief is that the man should be the breadwinner.

“There’s lot of blame to be placed on pop culture here … When I grew up, I worshipped heroes who were alpha males. They are shown as the protector of women, society and country at large … The standards you set for a man are sometimes unrealistic … Sushant finds it difficult to pursue a career and his insecurity breeds because he references his idea of a male to the childhood idols of his,” said Mathew.

10. Mathew, who has no connections to the Bollywood film industry, has made it on his own merit.

“I sustained myself in Mumbai through theatre, advertisements and anything that was available and would pay me … I have always been hustling and working very hard on making things happen. In an actor’s life, sometimes there may be nothing to show on paper, but OTT platforms have given actors like me a lot more opportunities … We don’t have a huge satellite value or bring in big opening box office numbers. We get the part if we audition for it,” said Mathew.

‘Choked’ is out now on Netflix.