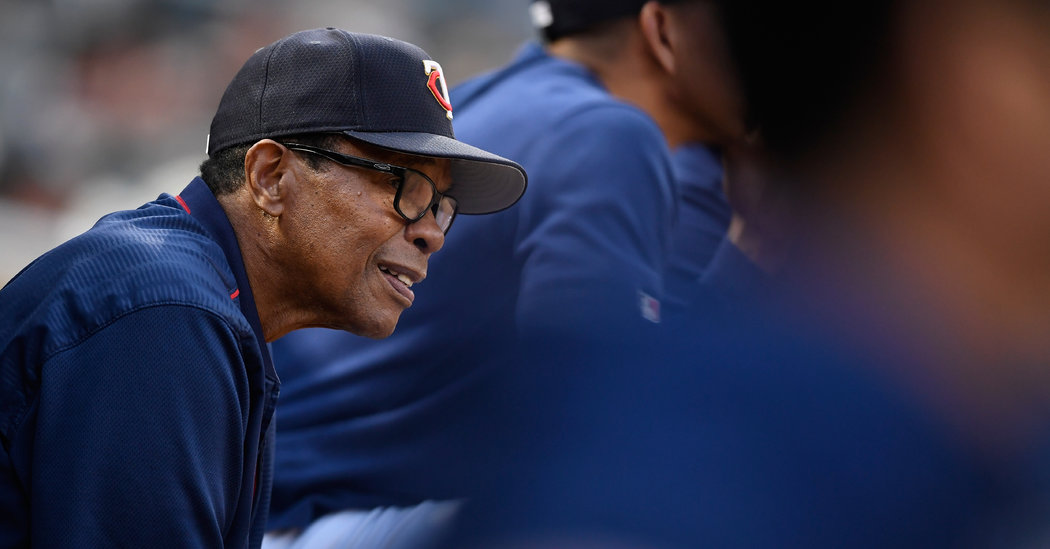 The tumult of recent weeks has made my thoughts turn to Rod Carew, whose past life as a Minnesota Twin speaks to present days in Minneapolis, and the country.

In a tweet the other day, the New York Times sportswriter John Branch (my former colleague, since I’ve been retired from the paper for 13 years) quoted something I had said in a panel discussion on race a number of years ago, which he obviously and chillingly found pertinent to the news of today, in which Black men are targets of the police, from casual racial discomfort to killings.

Then Carew came up again with the news that Twins management had decided to take down the statue of a former team owner, Calvin Griffith, in front of Target Field, the team’s ballpark, because of racist remarks he made at a speaking engagement in 1978.

Griffith had moved the Senators franchise from Washington, D.C., to Minnesota for the 1961 season. “I’ll tell you when I came to Minnesota,” he said. “It was when we found out that there were only 15,000 blacks here. Black people don’t go to ball games but they’ll fill up a wrestling ring and put up such a chant it’ll scare you to death. We came because you’ve got good, hard-working white people here.” Griffith later apologized for his remarks.

I called Carew and found him magnanimous, as usual, and also direct about Griffith and the current protest movement against racism.

It was clear he was working through the news about Griffith. He had issued a statement recently, which read in part that he “understands and respects” the Twins’ decision to remove the Griffith statue, but he also remembers “how supportive” Griffith was to him, a young Black rookie second baseman in 1967, and beyond. Carew wrote: “In 1977, my M.V.P. year, I made $170,000. When the season was over, Calvin called me into his office, thanked me for the great season, told me that I had made the team a lot of money, and handed me a check for $100,000. Could have knocked me over. A racist wouldn’t have done that.”

Carew, however, then still uncomfortable playing in Minnesota and, presumably, for Griffith, sought a trade that landed him in 1979 with the Angels, in Southern California, where he now lives.

Yet Carew recalls that when he was told he had been elected to the Baseball Hall of Fame in 1991, “The first person I called was Calvin.” He also reasoned, “While we cannot change history, perhaps we can learn from it.”

Now 74, Carew sounded strong. A few years ago, he went through a heart transplant and a kidney transplant — both at the same time. “I’ve recuperated, been given a clean bill of health,” he said, “and I’m feeling great.”

Like most of the country, he has been deeply troubled by the racial tragedies regarding white police officers and Black men that have been recorded. He has lived through discrimination both in his native Panama and in the United States, but maintains a cautiously optimistic outlook.

“It’s a way of life, but I do think things will change, at least somewhat,” he said. “Almost everyone has a camera on their cellphones. Now, cops are being watched like never before. I personally haven’t had any run-ins with police in recent years, but I’m still aware that you have to be careful.”

He learned that lesson a long time ago.

When I was doing the book with Carew, he told me then, “I’ve also been hassled by white cops when they’ve seen me driving a nice car,” adding, “They think you’ve got to be a pimp.” He recalled one particular instance which he told me was a specific that characterized the general.

“After a Twins game in Met Stadium” — or Metropolitan Stadium, the former ballpark in Bloomington, Minn. — “a few years ago, I’m driving down 35W near my home and going 50 in a 55-mile zone. Two cops in a squad car pull me over. ‘You know the speed limit, boy? You think you’re going to be burning up the road with this fancy car you’re driving?’

“They asked for my driver’s license. My first instinct was to tell them that I’ve got my license in my pocket and if they want to take it out. Among Blacks, white policemen have a reputation that as soon as you go into your pocket, they think you’re going to pull out a gun. They could jump me and pull out their guns and it’s all over.

“I told them my doubts. One cop said, ‘Do it slowly.’ When he saw my name, he starts shaking his head and says, ‘Well, Rod, you’re nuts for going over the speed limit.’ I said: ‘I know I wasn’t going over the speed limit. I knew you guys were behind me. And I knew you were going to stop me.’” It ended without further incident. “I’m Rod Carew, but the bottom line is I’m still Black.”

That event happened more than 40 years ago, but reads like it could have happened yesterday.

There’s a lot of growth in this country. We’ve come a long way. And we still have a long way to go.

Ira Berkow is a former Sports of The Times columnist. His forthcoming book, “How Life Imitates Sports: A Sportswriter Recounts, Relives, and Reckons With 50 Years on the Sports Beat,” will be released in August by Skyhorse Publishing.