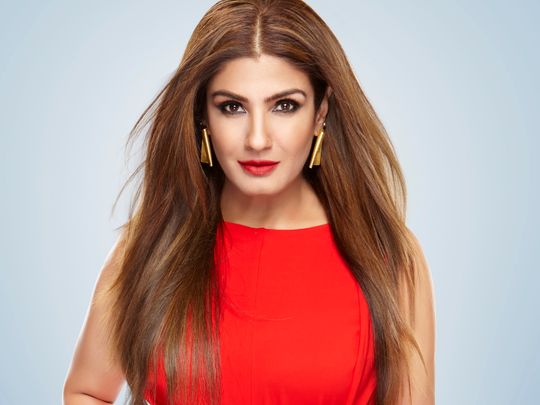 National Award-winning Indian actress Raveena Tandon, who began her career in Bollywood when she was 16, believes living in the public eye and being famous comes with its share of emotional baggage.

“When I first came into this line of work, I was barely 16 and it used to hurt a lot when yellow journalism, gossip tabloids or magazines used to write made-up, fake stories about me … There were times when I used to cry myself to sleep,” said Tandon in an interview with Gulf News.

The daughter of director Ravi Tandon, who ruled Bollywood in 1990s and early 2000, claims it was her family who helped her stay afloat. She was blessed to have friends and family who rallied around her during those dark phases and pulling her away from self-doubt and insecurity.

“You go through this phase where you think to yourself that you are not like this, but why do they paint you as this person that you are not? You do question it … My parents have been my rock and they have been rock solid behind me during those time. That stabilised me to a point,” said Tandon.

The perils of being rich, famous and popular in Bollywood is now the talking point among movie-mad Indians who are grappling with the suicide of actor Sushant Singh Rajput’s suicide. The actor, 34, reportedly hung himself from his ceiling in his Mumbai residence. Theories about his struggle with mental depression and the alienation he felt as an industry outsider is being picked apart. The debate about nepotism overriding merit has also been re-ignited with several stars asking for boycott of popular producers, directors and stars who trade work for those who are in their inner circle.

On the surface, Tandon — who was born into a movie family and is now married to a movie distributer, is that quintessential privileged insider. But even though she grew up in a family that were immersed in the world of movies, the insiders aren’t insulated from the pressures of being a star.

“The pressures are definitely high for us. And that’s not exclusive to our film industry alone. It’s the world that we live in today. Any high profile, glamorous job comes with its share of scrutiny, limelight and every action of yours is analysed. Every single action of yours is picked upon and people have all kinds of assumptions and deductions to make about what you said or did,” said Tandon.

The actress, who has starred in blockbusters such as the action thriller ‘Mohra’ and the family drama ‘Laadla’ along with critically acclaimed, women-empowering films like ‘Maatr’ and ‘Shool’,has internalised that intense degree of scrutiny.

“You just have to be brave enough to ignore all that noise or learn to bounce it off you. There are many sensitive people who take that intense scrutiny to heart … You have learn to believe in yourself and learn to have faith in yourself. If you know hat you have not done any harm, you can have a good night sleep with a clear conscience … Initially, it hurts lot though,” said Tandon.

In theory, Tandon — by accident of birth — comes across as someone who is equipped and armed with more resources than an aspiring acting hopeful from a small-town in India who is trying to carve a path in Bollywood. That outsider has no connections to fall back upon or strings to pull when the going gets tough.

The so-called insiders are usually daughters of famous actors, producers and directors, while outsiders are those who have no industry connection and can’t cash in on their dad or relative’s popularity.

“There is nothing like insider and outsider in Bollywood. I was born into this industry, but I did not let my own father launch me because I wanted to do something on my own. I wanted to stand up on my own merit and be on my own feet. I didn’t want any to push me towards success,” said Tandon. The actress claims she was ‘discovered’ by somebody outsider her circle and thrust into the world of modelling before she made her debut as an actress.

“Initially I didn’t even want to join the movies. My father didn’t call up people he knew or recommended me for projects. I was discovered in movies through a few ads I did and later people came to know that my father is a director. I consider myself completely self-made,” said Tandon.

Although she is proud of her achievements in her career, there’s no denying that ‘bullying’ exists in Bollywood and beyond.

“Every profession has its share of dirty politics … It could be airlines, the modelling world or your own media office. Bullying, ragging and harassment doesn’t happen only in classrooms and high schools … it happens everywhere. The only difference is that it is written about, sensationalised a great deal when it happens in our industry because it makes for a good, fun copy to read.”

While she is aware of the underbelly in any profession, her sole philosophy is that you just need to learn to ‘fight your own battles’.

“You just can’t give up,” said Tandon. While the industry has bestowed her with fame, money and success, she is frightful pragmatic about her place in the food chain. She believes Bollywood is a world where dreams of aspiring talents come alive. Did she pay a steep price for being a part of Bollywood, that is now getting the rap for being petty and hostile to outsiders?

“There’s no price as such that I paid for being in the limelight. I love my film industry and it has given me my all. It has given me my fame, my life, my name and a standing in society. I love that my industry also gives opportunities for people. People come from nowhere and become world famous. Bollywood is a profession where dreams come true … It gives you too much or too less depending on your talent, hard work and sincerity … I have only received a lot from this industry.”