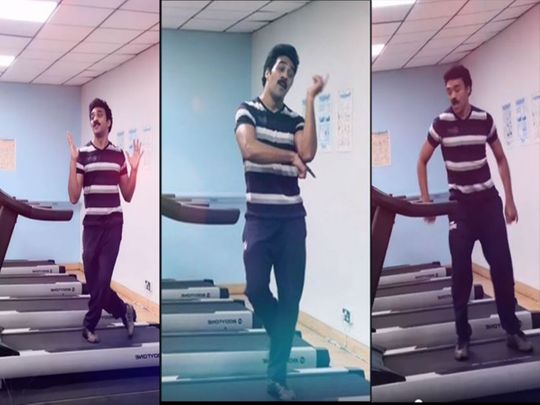 UAE-based South Indian actor and businessman Ashwin Kkumar was given a precious gift on his 33rd birthday this week when acting legend Kamal Haasan gave a huge shout out to his fan-boy dance video and shared it on his own official Instagram account.

Kkumar, who has acted in Malayalam blockbusters such as the Dubai-set Malyalam blockbuster ‘Jacobinte Swargarajyam’, shot an amateur video dancing to Haasan’s old song ‘Annathe Adurar’, imitating the actor-politicians’s iconic dance steps on a moving treadmill two weeks ago.

His video shot in Dubai was not only noticed by Haasan, but a glowing message to the actor on Instagram also came his way.

“His words of appreciation was the biggest and significant moment of my life … All these years of penance seems to have culminated into this big blessing. It’s the biggest blessing to be admired by the man I have idolised all these years. He’s the true master of re-invention and talent,” said Kkumar in an exclusive interview with Gulf News.

In the video that has been picked up robustly by Haasan, his enthusiastic fan clubs and Malayalam actors Aju Varghese and Kunchacko Boban, Kkumar is dancing to the hit song effortlessly.

“The best thing about Kamal Haasan is that he has no hesitation to try anything new. He is the ultimate trendsetter and a path breaker … He exuded such amazing energy in the original dance number. My video wasn’t of film quality, but the reaction of the Twitterati and in other social media platforms was unforgettable,” said Kkumar. He chose the song from a film where Haasan played a dwarf at a time when computer graphics weren’t the norm.

“He still pulled that role through his sheer grit, determination and talent. He is so inspiring and this was my fan-boy tribute to him,” said Kkumar.

The self-made actor, who has worked with talents like Tamil actor Dhanush, Prithviraj, Indrajit and Nivin Pauly, claims he grew up in a typical Tamilian household in Dubai were films starring legends like Haasan and Rajinikanth were playing at all times in the background. His family owns and runs an automotive company in the UAE for decades.

Haasan’s message posted along with his video will always be cherished by this rising star.

“He raised such a valid point when he wrote, ‘every artist has a doubt if his good work has reached his fans or not … I observed that every single move of his was replicated with grace. How more proud can a father be … Long live son,’ It’s humbling,” said Kkumar.

The warm reception to this viral dance video shot in the gym in his apartment in Dubai has also given him the confidence to do a similar tribute to actor Vijay, who celebrates his birthday on June 22.

Kkumar is a self-made actor who believes that an artist’s body of work will speak for himself. He has made his mark in this industry through his passion for acting.

“I am an outsider and I am doing some exciting projects. My next film ‘Aaha’ is with Indrajit which was scheduled to release in May. Each film teaches me something new … Everybody fights their own battles here.”

Upon public demand, Ashwin Kkumar has posted another video where he is dancing to Vijay’s song from the movie ‘Master’.