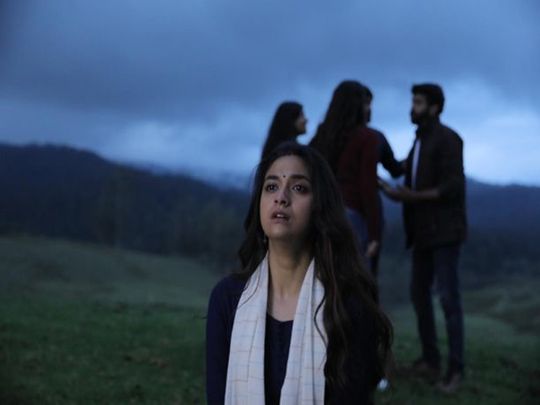 The opening scene of the film sets the stage for an edge-of-the-seat thriller about a missing child, but midway ‘Penguin’ falters with an unconvincing plot and several loose ends that are never really addressed.

Championing the cause of child sexual abuse victims seems to have caught the interest of Tamil cinema, but if only filmmakers could support this with an engaging story that educates children on potential abusers, while guiding parents on being open and accessible to their little ones.

Written and directed by debutant Eashvar Karthic, ‘Penguin’ becomes more a film about glorifying gore and a personality disorder, while taking refuge in lauding motherhood along the way.

Rhythm (Keerthy Suresh) is a en emotionally-troubled mother who cannot get over the loss of her son Ajay. She is pregnant with her second child, thus making her vulnerable enough to hook onto viewers’ emotions. Her maternal instinct is such that she does not hesitate to put herself in the most dangerous of situations for the love of her child.

Suresh makes her Rhythm endearing, with some of her scenes beautifully captured on camera, like the one where she is in a hospital and is playing with a little girl.

Despite the hard work Suresh puts in, switching at ease between vulnerability and intensity, ‘Penguin’ disappoints overall with weak writing and gaping plot holes.

Rhythm’s relationship with her husband Gautham is barely explored. And what about Ajay’s trauma? For one who has been away from home and family for six years, it is touched perfunctorily.

Fighting one antagonist is not enough for this mother either. Neither is there a back story for the arch villain, nor are his actions explained. He is simply portrayed as a maniac with scenes painted in gore. Then, when a second antagonist makes his presence felt, ‘Penguin’ becomes an exhaustive exercise.

The supporting cast, apart from Linga — who plays Rhythm’s former husband Raghu — the actors carry wooden expressions through the narrative.

Karthik Palani’s visuals of Kodaikanal are beautiful, but beyond the frills ‘Penguin’ fails to soar.