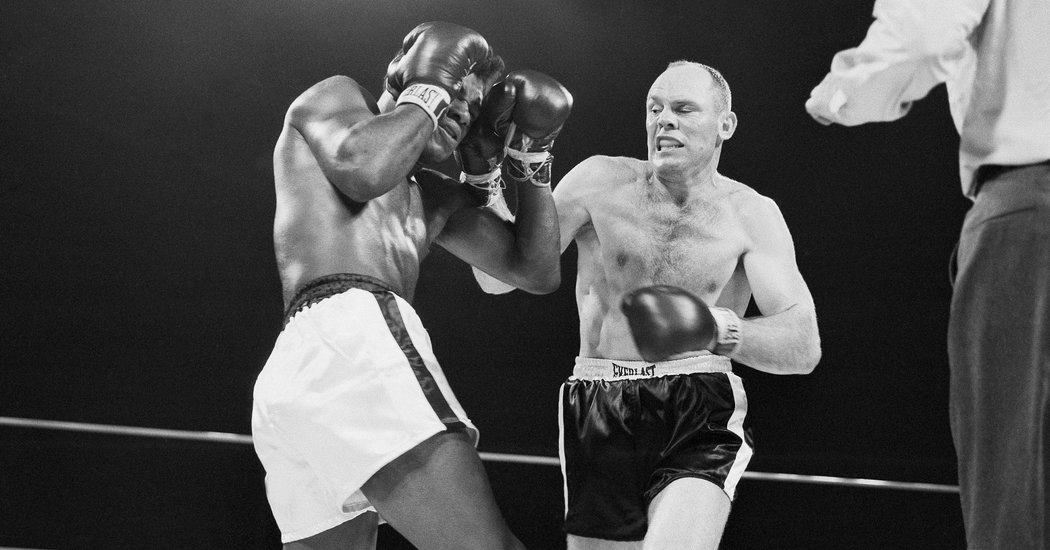 When Pete Rademacher won the gold medal in heavyweight boxing at the 1956 Summer Olympics in Melbourne, Australia, he checked off one part of his audacious plan to be the first fighter to take on the world heavyweight champion in his first professional bout.

No boxer had ever made that improbable leap before.

Rademacher knew who his opponent would be within hours of his Olympic victory. Floyd Patterson, had just knocked out Archie Moore in Chicago to fill the vacancy created by Rocky Marciano’s retirement.

But first, Rademacher had to persuade Patterson to face him. In May 1957, he did. Helped by a sporting goods magnate he knew when he was stationed at Fort Benning, Ga., Rademacher raised the $250,000 demanded by Patterson’s manager, Cus D’Amato, to guarantee his fighter’s purse.

Rademacher was also adept at promoting himself as a confident, viable challenger.

“For one thing, he is frightfully glib, and for another, he is a phenomenal salesman,” Gay Talese wrote in The New York Times before the bout. One boxing journalist, he added, had nicknamed Rademacher “the Pug in the Gray Flannel Suit.”

Patterson was only 22 but had fought professionally 33 times. At 28, Rademacher, was the taller and heavier boxer, but he had never fought longer than three rounds in 79 amateur bouts.

Fight night was on Aug. 22, 1957, at Sick’s Stadium in Seattle. In the ring, Rademacher started strong. He won the first round, according to various reports. In the second, he knocked Patterson down with a right hand.

“I thought he was down for good,” Rademacher told The Ring magazine in 1990. “I was screaming to myself, ‘Boy, we’re there! We’re there!’”

But Patterson rose quickly from the canvas and, over the next four rounds, knocked Rademacher down seven times, the last in the sixth, for a knockout.

The loss was the best-known bout in Rademacher’s boxing career, which ended in 1962 with a modest 15-7-1 record.

Rademacher died on June 4 at the Ohio Veterans Home in Sandusky, Ohio. He was 91. His daughter Margot Skirpstas, in confirming his death, said he had had dementia. She said his brain had been donated to the Brain Injury Research Institute in Wheeling, W. Va., to determine if blows to his head from boxing, or another cause, had contributed to his illness.

Thomas Peter Rademacher was born on Nov. 20, 1928, in Tieton, Wash., a small town in the south-central part of the state. His father, Herbert, owned an apple orchard; his mother, Thelma (Nelson) Rademacher, was a homemaker.

Pete was 14 when his parents sent him to a military academy in Tennessee. There, after contracting rheumatic fever, he learned to box to help rebuild his strength and endurance. He returned to Washington and attended Yakima Valley Junior College, where he played football and baseball and wrestled and boxed.

He won the Northwest Golden Gloves boxing tournament in Seattle four times, the first in 1949. The next year he entered Washington State College (now a university), where he earned a bachelor’s degree in animal husbandry. After graduating, he won the 1953 United States Amateur Championship. A year later, he headed to Fort Benning to fulfill his commitment to the R.O.T.C. program at Washington State.

He continued to box at Fort Benning. As a member of the Army team, he won the Chicago Golden Gloves and the All-Army and All-Branches service championships in 1956 — the prelude to victory at the United States Olympic trials and a spot in the Melbourne Games.

Rademacher won the Olympic gold medal with knockouts of Josef Nemec of what was then Czechoslovakia, Daniel Bekker of South Africa, and, in the final, Lev Mukhin of the Soviet Union.

Rademacher’s gold medal victory was as cathartic for him as it was for a fellow boxer from Hungary, where Soviet tanks and troops had crushed a popular uprising weeks earlier.

“When I dumped the Russian and they held my hand up, the Hungarian fighter jumped in the ring and lifted me up,” he told The Gazette of Medina, Ohio, in 2007. “I was bawling like a baby.”

In Seattle eight months later, the circumstances were much different. Rademacher had dared to fight a champion but lacked the stamina to stay with him. “I took the gamble and lost,” he said after the fight, conceding that he had felt his strength fade in the fourth round. “But I’m glad I did.”

After boxing, Rademacher sold homes at a development in Medina, his home for many years; served as president of Kiefer McNeil, a manufacturer of swimming pool products; and was the golf director for the American Cancer Society in Ohio.

In addition to Ms. Skirpstas, Rademacher is survived by two other daughters, Susan Rademacher and Helen Chaney; his sisters, Mary Brown, Melba Strand and Sharon Brown; and two grandchildren. His wife, Margaret (Sutton) Rademacher, died in 2007.

Rademacher did not have a heavyweight championship belt to show off, but he made good use of his Olympic gold medal. At motivational speeches, he tossed it to audience members “trusting they would return it,” Ms. Skirpstas said.

Rademacher gave it to Ms. Skirpstas when he entered the veterans home a few years ago, and she entrusted it to her son, Pete, who carries it to qualifying tournaments on the PGA Tour.

“He’s the spitting image of my father,” she said. “He just doesn’t have the same big paws.”