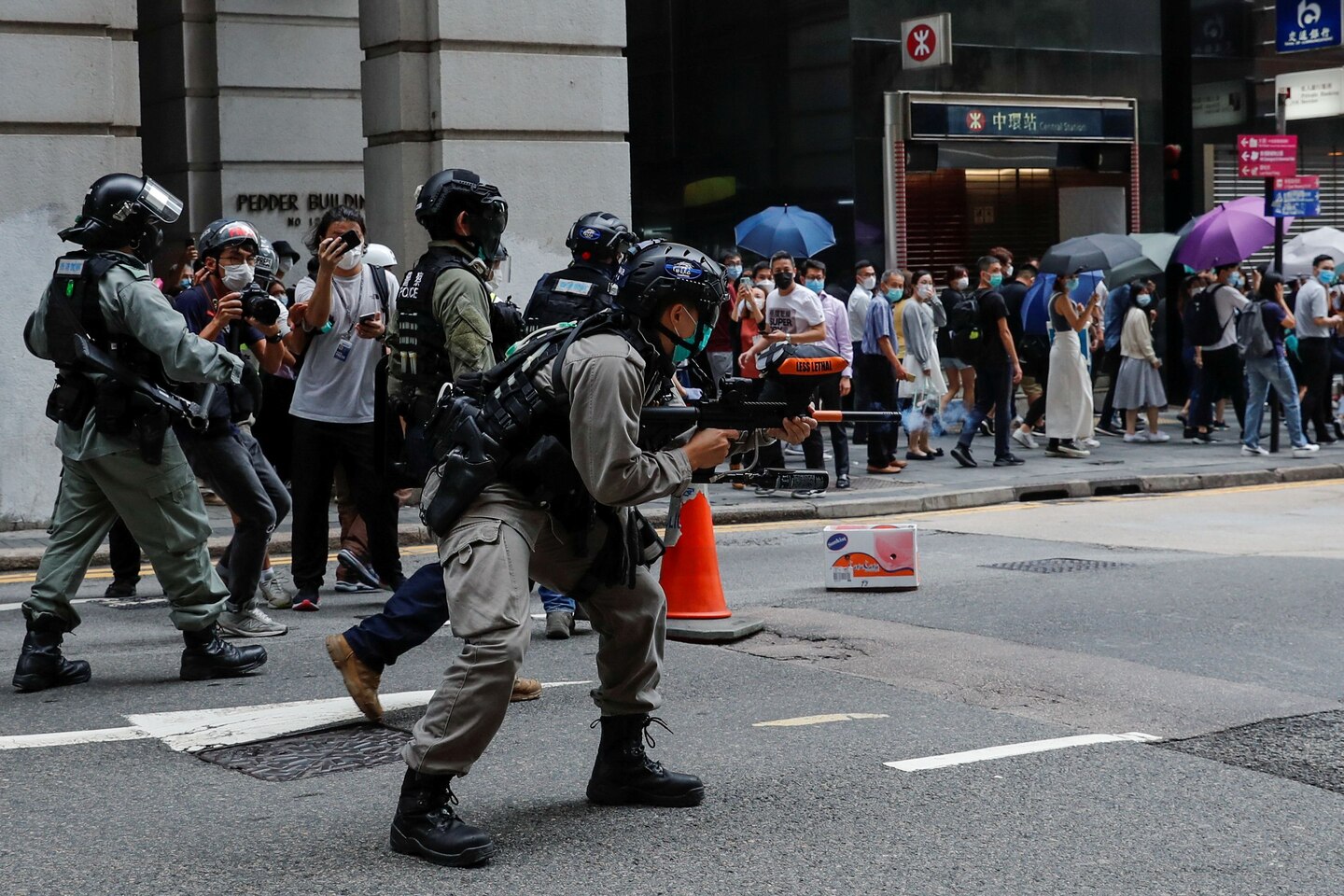 By afternoon, protests flared in parts of the city as office workers shouted “Free Hong Kong!” and taunted riot police, who responded by shooting pepper spray and pepper balls, leaving demonstrators and other people choking on the roadside.

Protesters have been mobilizing against Beijing’s power grab, driven by fears that their freedom to protest, voice critical opinions and other rights enjoyed for generations will soon be eliminated. China’s rubber-stamp legislature last week announced it would bypass Hong Kong’s political system and impose by decree new national security laws in the city that would criminalize secessionist activities, “foreign interference” and subversion of the state.

Experts worry that these broadly worded measures will be a catchall to snuff out dissent in Hong Kong, where months of street protests last year were similarly driven by fears over the Beijing’s encroachment on the city’s constitutional autonomy. Hong Kong was promised control of its own affairs, except for foreign affairs and defense, under the terms of its 1997 handover from Britain to China. U.S. lawmakers have responded strongly to Beijing’s incursions with calls for sanctions against Chinese officials and banks.

The long-touted anthem bill has been another lightning rod for the protest movement. The measures would allow for up to three years in prison and fines of about $6,500 for anyone who mocks or disrespects the Chinese anthem, “March of the Volunteers.” Hong Kong soccer fans routinely boo the song at games, an indication of the broad opposition to the Communist Party in the city.

With the bill up for discussion in the legislature Wednesday, Hong Kong police by daybreak had fortified roads, parks, walkways and office buildings around the legislative complex, making it impossible for protesters to get near the building. Police also moved to break up gatherings of people sitting or standing nearby. Pro-democracy unions had called for their members to go on strike, while some students planned to skip school just days after classes resumed following the coronavirus outbreak.

In a statement on Facebook, police warned “thugs not to try and challenge the rule of law in Hong Kong.” Police said they had arrested 16 people between the ages of 14 and 40 for offenses including the possession of weapons and dangerous driving.

“It is as if Xi Jinping is ruling our city by himself!” an elderly woman shouted at police officers who told her to keep walking down a pedestrian bridge, in one of several tense exchanges. Others joined in to continue shouting slurs at the police, while groups of young men were patted down and searched nearby.

Hong Kong officials have lined up to support Beijing’s effort to pass the new national security law, which China’s legislature will vote on Thursday. The bill will then be forwarded to the National People’s Congress’ Standing Committee, China’s top legislative body, to craft in detail.

“We are a very free society, so for the time being people have this freedom to say whatever they want to say,” said Hong Kong Chief Executive Carrie Lam in a news conference Tuesday. The legislation, she said, will ensure “Hong Kong’s freedoms will be preserved.”

Beijing’s moves in Hong Kong have angered China hawks in Washington, who have called for sanctions against individuals who curtail the territory’s freedoms.

A State Department report, due to be released soon, will have to make a judgment on whether Hong Kong remains sufficiently autonomous from China. An assessment to the contrary could have far-reaching impacts for the billions of dollars in trade between Hong Kong and the United States, and for the city’s status as a center for trade and finance.

President Trump on Tuesday said his administration is planning to announce a strong response to China on Hong Kong by the end of this week.