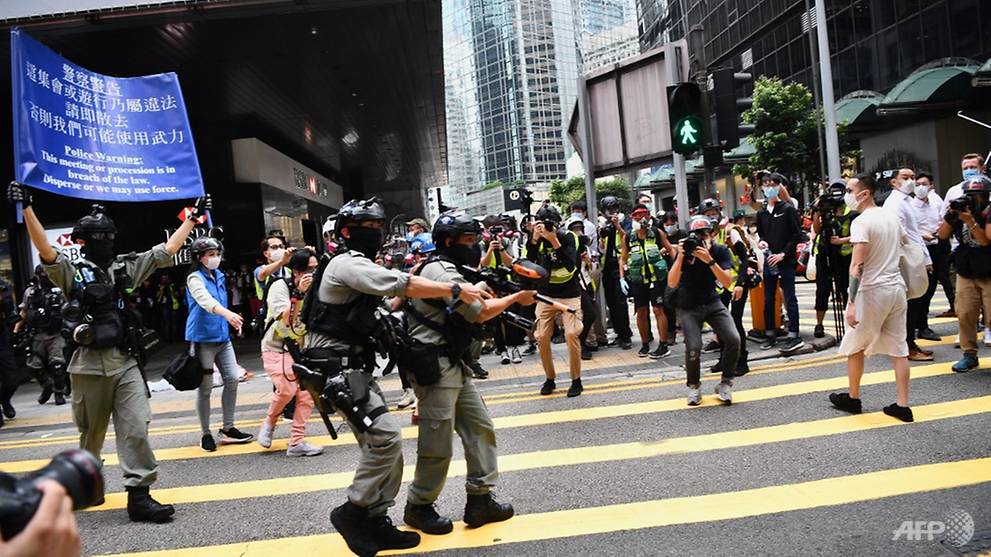 HONG KONG: Hong Kong police fired pepper ball rounds at protesters, after chaos unfurled at the heart of the financial centre on Wednesday (May 27).

Police also surrounded the Legislative Council amid tensions over perceived threats to the city’s freedoms as activists called for protests against a Bill to criminalise disrespect of the Chinese anthem.

Riot police also rounded up dozens of people on the streets of the shopping district.

Hundreds of riot police took up posts around Hong Kong’s legislature overnight as protests were expected over a Bill criminalising disrespect of China’s national anthem and against plans by Beijing to impose national security laws.

The proposed new national security laws have triggered the first big street unrest in Hong Kong since last year, when violent protests created Hong Kong’s biggest crisis since the return of Chinese rule in 1997 from Britain.

Ahead of protests, authorities erected a two-metre wall made of plastic barriers filled with water around the Legislative Council, extending across a park up to Victoria Harbour.

In other parts of the city, protesters used bins and debris to block roads, while activists issued calls online for demonstrations in various locations later in the day.

All this follows violence over the weekend in Hong Kong when police fired tear gas and water cannon at thousands of protesters who gathered on Sunday against a controversial security law proposed by China.

The planned legislation – expected to ban treason, subversion and sedition – comes after Hong Kong was shaken last year by months of massive, often-violent protests, and repeated warnings from Beijing that it would not tolerate dissent.