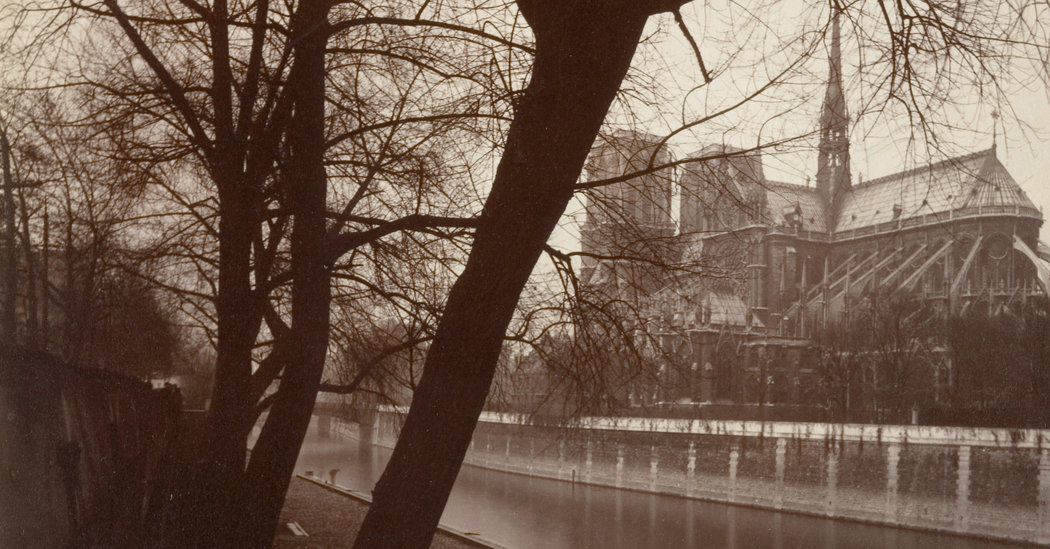 PARIS — For much of the last two months, Paris has been empty — its shops and cafes shuttered, its streets deserted, its millions of tourists suddenly evaporated.

Freed of people, the urban landscape has evoked an older Paris. In particular, it has called up the singular Paris of Eugène Atget, an early 20th-century father of modern photography in his unsentimental focus on detail.

In thousands of pictures, Atget shot an empty city, getting up early each morning and lugging his primitive equipment throughout the streets. His images reduced Paris to its architectural essence.

Mauricio Lima has followed in Atget’s footsteps, shooting images of the same scenes his famous predecessor captured. But this time those streets are deserted because of the coronavirus pandemic. Mr. Lima’s recreations offer new insight into Atget’s work — and into the meaning of a city unique in its beauty but also in its coldness.

The critic and philosopher Walter Benjamin famously invoked crime scenes in discussing Atget’s photographs. He was pointing to their emptiness, their clinical attention to details of the urban landscape, their absolute rejection of the sentimental and the grandiose.

As Benjamin observed, Atget established a beneficial “distance between man and his environment.” And Mr. Lima’s haunting updated recreations confirm the long-dead photographer’s disquieting insight — Paris doesn’t care about your presence. It is indifferent, and will certainly go on without you.

You can feel joy at standing on a Paris street, but the feeling is not reciprocated.

Atget, who was born in 1857, initially tried unsuccessfully at acting and painting. In 1890, he set up shop as a photographer, in order — as a sign over his door said — to provide “Documents for Artists.” He knew that painters needed images as models for their work, and he set about furnishing them.

For nearly three decades, he trudged through the city, bearing his heavy tripod and documenting a Paris of narrow streets and grime-covered low buildings that was already disappearing.

The world was mostly indifferent to Atget’s work until, several years before his death in 1927, he met a young American photographer, Berenice Abbott, who was working as an assistant to the artist Man Ray. She photographed him, wrote about him, acquired many of his prints and promoted him relentlessly for 50 years.

Today, Atget is recognized as a major figure in the history of photography.

The empty Paris of his prints looms out of the half-light of what seems like perpetual fog. His buildings are independent of people. They don’t even need them. Paris, the message seems to be, continues. It does not care about the individual presence. The city is not sentimental about humankind.

True, traces of humanity are ever-present in his pictures — torn advertising posters, artisanal shop signs, bins of vegetables, rows of boots. But these are only reminders that the city might once have been inhabited. And there are few people in the images to confirm this.

In Atget’s Paris, “the city is evacuated, like an apartment that hasn’t yet found its new tenant,” Benjamin wrote.

Compare that with the images from today. The occasional masked figures are incidental to the landscape. That they wear masks, hiding part of their faces, is a further denial of their humanity.

The urban landscape asserts its presence, independent of people. In the present-day photograph of the strange angle at the corner of the Rue de Seine, in the now-fashionable 6th arrondissement — one of Atget’s most famous images — the building seems to jut insolently out of the sky, like a kind of sculpture.

The lonely cyclist on the Rue de l’Hotel de Ville emphasizes the street’s emptiness, as does the small dog in front of 14 Rue Servandoni. The brighter light of the current pictures emphasizes the cold, hard angles of the stone on the Rue de la Bucherie. Paris seems more indifferent than ever.

It is also evident in the present-day photographs that Paris has been mightily cleaned up. The accumulated grime and soot of centuries — still present in the 1960s — has been washed away.

The blackened facades, so prominent in photographs of Paris during the German occupation in World War II, are now white. The advertising posters that once plastered many of the facades are long gone. Walls have been smoothed over, resurfaced, repainted.

Paris is no longer a city of working people. The carpenters, cobblers, chimney-sweeps, vegetable-ladies and porters whose presence is evoked, if not always represented, in Atget’s pictures are long since gone.

The Rue de Seine, with its rooftop gardens and chic storefronts, is now one of the pricier bits of the city. It certainly doesn’t look like that in Atget’s print. But in today’s pictures, Paris has been prettified and gentrified.

The “picturesque” — which Atget shunned, as Benjamin points out — is more difficult to avoid. Difficult but, in the time of the coronavirus, perhaps not impossible.