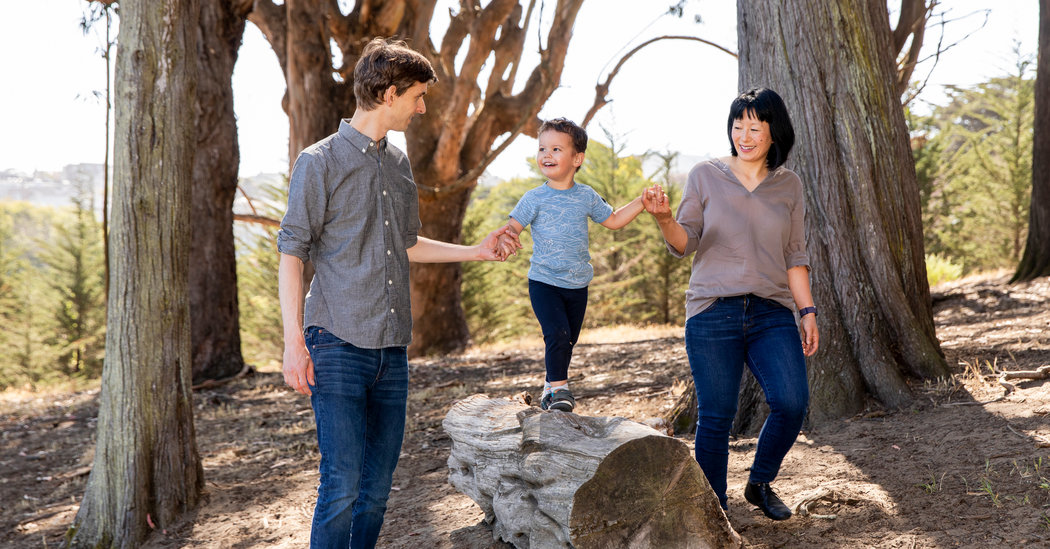 Lian Chikako Chang and her husband, Drew Harry, agree on the big picture when it comes to minimizing their 3-year-old’s risk of exposure to the coronavirus. They both work in the tech industry and neither is an essential worker, so they have been following California’s shelter-in-place rules and going outside only for curb-side pick up for groceries once a week or brief bouts of exercise. They take their son to local parks on weekdays, because it is less crowded than on weekends.

“We mostly are aligned,” said Chikako Chang, 39, who has been quarantined in San Francisco. But she and her husband still fight about the little things. The couple had a disagreement recently about whether their preschooler should use a public restroom at the park.

“To me, obviously that’s off the table,” Chikako Chang said. “But my husband is less interested than I am in having our son poop in a Ziploc bag.”

Before the pandemic, a couple probably would not have needed to have a discussion beforehand about whether their child could use a public restroom. But now, decisions small and large require negotiation, and many spouses are finding that the virus is revealing fundamental differences in their personalities and belief systems.

Now that many states are moving beyond strict shelter-in-place edicts, couples are trying to figure out how to venture out of their homes and begin seeing friends and extended family in a world where previously mundane activities now feel fraught with potential danger.

Christine and Josh Friberg of Roseville, Minn., disagree fundamentally about the dangers that the virus poses to them and their four children, who are 14, 12, 10 and 6. “Josh and I have some major differences politically,” Christine Friberg, 45, said. It surprised her that her husband thought of the virus as a political issue, whereas to her, it was a public health matter. She believes the virus is a major national crisis, while her husband is more skeptical. He said he’s not sure it was political at the beginning, but it is now.

Josh Friberg, 46, said: “My beef with the whole thing is I don’t think response is commensurate with the threat. I don’t know that I’m necessarily cavalier about it, but also I’m concerned with our rights as citizens.”

A few weeks after the stay-at-home order was put in place in Minnesota on March 25, the Fribergs fought over whether one of their daughters could go on a bike ride with friends — he said it was OK, and she disagreed. Another point of strife: when he attended a protest against Minnesota’s stay-at-home order in April. “She got upset because I went down to the governor’s mansion to voice my opinion,” he said.

Christine Friberg said, “Neither of us is budging or changing our belief or narrative around it.” She has asked her husband to stop talking about his doubts about the severity of the pandemic and the state’s response in front of their children, and he agreed. “I’m grateful,” she said.

Josh Friberg said he also defers to his wife when it comes to where their children are allowed to go and under what circumstances. “She’s the one who has to deal with the kids, the one who has to deal with any sickness if it does show up,” he said. As a contractor, he’s an essential worker and has been going about his business as usual. Christine Friberg, who runs a nonprofit and helps with the accounting for Josh’s business, has been managing the child care and distance learning. “I have been trying to be respectful, ” he said.

Jessica Calarco, Ph.D., an associate professor of sociology at Indiana University who is conducting a study about parenting during the pandemic, said that the Fribergs’ behavior around the virus jibes with what researchers already know about how health decisions are made in families led by heterosexual couples.

“Moms are the ones primarily making decisions about vaccines, nutrition, and when and how to schedule doctor visits. For most households that seems consistent with what’s happening during the pandemic,” Calarco said.

Calarco’s study, which has not been published or peer-reviewed, surveyed 139 economically and politically diverse mothers in Indiana, all of whom have children under 2, over a 10-day period in April. Most of her respondents are white, and only one is in a same-sex relationship. The preliminary findings showed that, according to these women, most of their partners and ex-partners had similar levels of concern about the virus, though the mothers tended to be more risk-averse.

These women reported that when their male partners were more risk-averse, the extra burden of staying “safe” fell on the mothers, Calarco said. For example, if a man thought all the groceries should be wiped down before entering the house, he tended to expect his wife to do that chore. She often did not want to.

She and her husband, Jeremy Rudy, 43, have been sparring over whether to send their 12-year-old son to a local camp this summer that had not yet canceled its season. When she found out the camp was considering opening, she was so excited that she bounded into her husband’s home office to tell him. “He looked at me and said, ‘I’m not sure I’m comfortable with that.’ It felt like a giant deflating of a balloon in slow motion,” she said.

Jeremy Rudy said: “I think that philosophically we’re aligned, which is why I didn’t think there was a big disagreement. But how we tactically approach stuff, there’s a disconnect.”

He’s a pharmaceutical consultant and an introvert, his wife said, so he has been professionally and personally thriving. But her work as a freelance writer has floundered, and she misses interacting with other adults.

“With the flexibility from working from home part time comes the assumption that I am the go-to person for any changes in child care or routine, and the work that I have gets bumped down below everyone else’s needs,” she said. “My productivity is little to none.”

Even if differences over risk assessment seem intractable, there are ways to compromise. Emily Oster, Ph.D., a professor of economics at Brown University and the author of “Cribsheet: A Data-Driven Guide to Better, More Relaxed Parenting, From Birth to Preschool,” said that couples should drill down and figure out “what is the question we are asking and what is the alternative?”

Oster created a risk-assessment framework for her newsletter, ParentData, offering the example of a disagreement over scheduling a visit with grandparents. If one person is saying no, do you mean never? Until there’s a vaccine? Or until June? These are questions that couples need to unpack. For the Rudy family, the answer about camp isn’t never. Jeremy Rudy said he is open to registering their son, and then, if the camp still opens, making the decision later on when they have more data.

It’s also worth recognizing that your partner’s feelings around the coronavirus are about so much more than just the virus, said Alexandra Sacks, M.D., a reproductive psychiatrist based in New York City. Someone who is anxious about their safety may have a history of trauma, she said, and someone who refuses to follow public health recommendations may have a history of being controlled, say, by a suffocating parent. The virus is a “Rorschach test about what your baggage is,” she said.

For arguing couples, Dr. Sacks recommends scheduling a quiet time to talk to find common ground, even if you have basic factual disagreements. “You want your kids to be safe. You want to maintain a loving, caring feeling in your home,” she said. “Start there.”

Sinead Smyth, a licensed marriage and family therapist in the Bay Area, said that empathy is key when having discussions with your partner around risk management, because if you try to force people into a position that makes them uncomfortable, they will dig in their heels. “You can be supportive of their feelings without buying into their worldview,” she said. The ultimate goal is to create a plan together.

For his part, Drew Harry, the dad of the potty-seeking 3-year-old, felt bad about considering the public bathroom for their son, and ultimately agreed with his wife’s assessment.

“If I had looked at the bathroom and thought it through, I probably wouldn’t have made the choice to use it,” he said. The argument ended up being moot, after all. The public bathroom was locked. A Ziploc was used, and discarded appropriately.