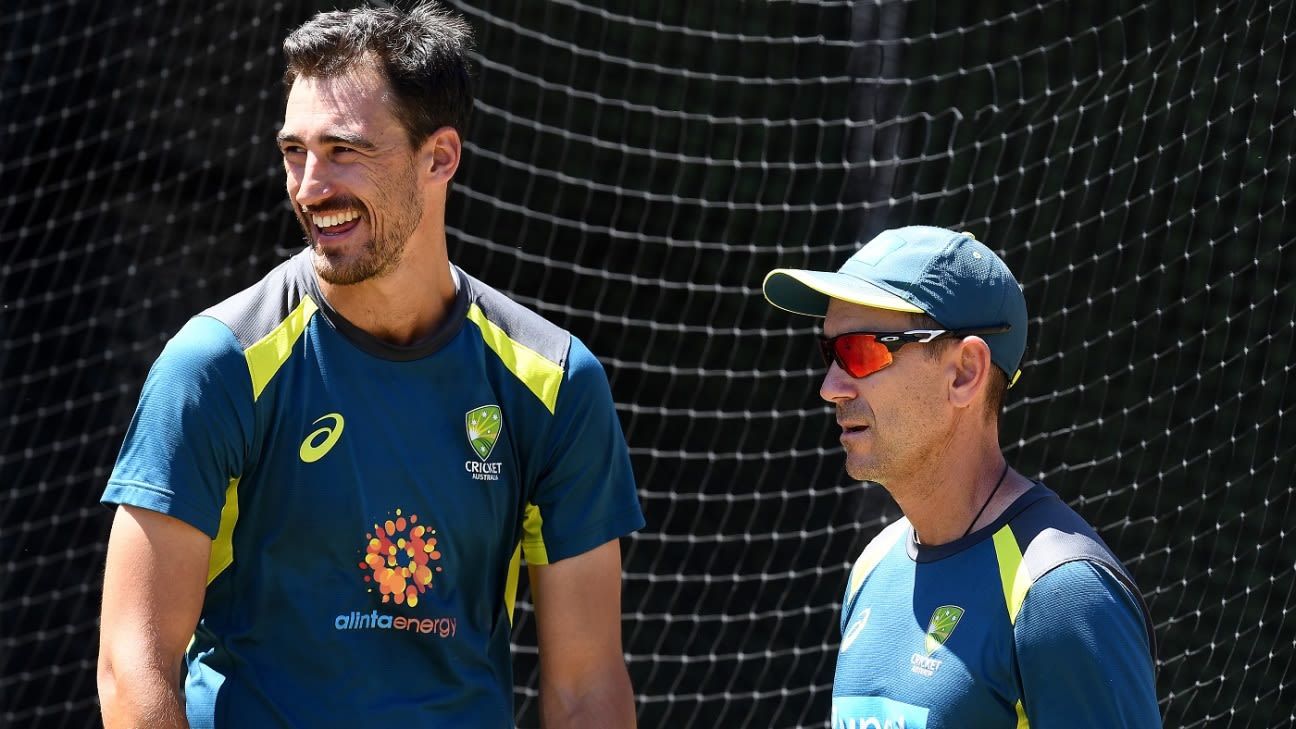 Cricket runs the risk producing “boring” contests, losing followers of the game and reducing the number of young aspirants to bowl fast if a better balance isn’t struck between bat and ball. These are Mitchell Starc‘s views in reaction to the interim ruling offered by the ICC to ban saliva from shining the ball in the time of the coronavirus pandemic.

Having bent his back on a succession of unhelpful pitches in home Test matches over the past few summers, Starc argued similarly to his colleagues Pat Cummins and Josh Hazlewood. He thinks the ICC’s prohibition of saliva, but not sweat, from being used to shine the ball out of health concerns needed to be counterbalanced by another measure.

While the ICC’s cricket committee has suggested more sporting pitches could be a solution currently, Starc was understandably wary about the prospect of administrators and ground staff acquiescing to this instruction, and instead pushed for a temporary allowance for an artificial substance with which to polish the ball. This concept, as reported by ESPNcricinfo, was discussed by the ICC committee before being ruled out on the basis that it took the game too far from its existing laws.

“I understand that completely and hear what they’re saying in terms of a foreign substance, but whether that can be controlled by the umpires in terms of they have a portion of the wax and you can only use a small amount, I don’t know, but there needs to be a maintaining of the even contest,” Starc said. “I understand what they’re saying with foreign substances and that it’s black and white in terms of that, but it’s an unusual time for the world and if they’re going to remove saliva shining for a portion of time they need to think of something else for that portion of time as well.

“Whether it be the wickets being not as flat or at least considering this shining wax to a degree, there needs to be some thought on that I think. I guess you use both those things [saliva and sweat] to shine the ball. I’ve probably been a bit more on the sweat side, just trying to not get my hands in my mouth too much, but yeah, I agree completely with what Pat commented on last week – that contest with bat and ball, we don’t want to lose that or get further away from that even contest, so there needs to be something in place to either keep that ball swinging.

“They’ve mentioned that it’s only going to be there for a period of time and then once the world gets back to a relatively normal situation then saliva can come back into shining the ball. But if it’s going to be a window of time there, maybe then instruct people to leave more grass on the wickets to have that contest or if they’re going to take away a portion of maintaining the ball, there needs to be that even contest between bat and ball, otherwise people are going to stop watching, and kids aren’t going to want to be bowlers.”

Administrators have long supported the concept of more lively pitches for bowlers, but far too often the practical outcome has been the preparation of surfaces devised to see a Test last for five days, typically producing a very attritional brand of cricket. Starc was clearly casting his mind back to India’s previous tour of Australia in 2018-19, where after two evenly-fought matches on fair pitches in Adelaide and Perth, Virat Kohli’s team ground the Australians into the beige turf of the MCG and SCG to close out the series.

“I think as we saw in Australia the last couple of years, there’s some pretty flat wickets, and if that ball’s going straight, it’s a pretty boring contest,” Starc said. “I think Kookaburra have been developing a shining wax or something of the sort, so whether there’s consideration of that, there needs to be some [thought to] maintaining that even contest. Generally the spinners reckon that the wickets that seam a bit also spin, so maybe if you bring the bowlers back into the game, you’ll tick all the boxes.”