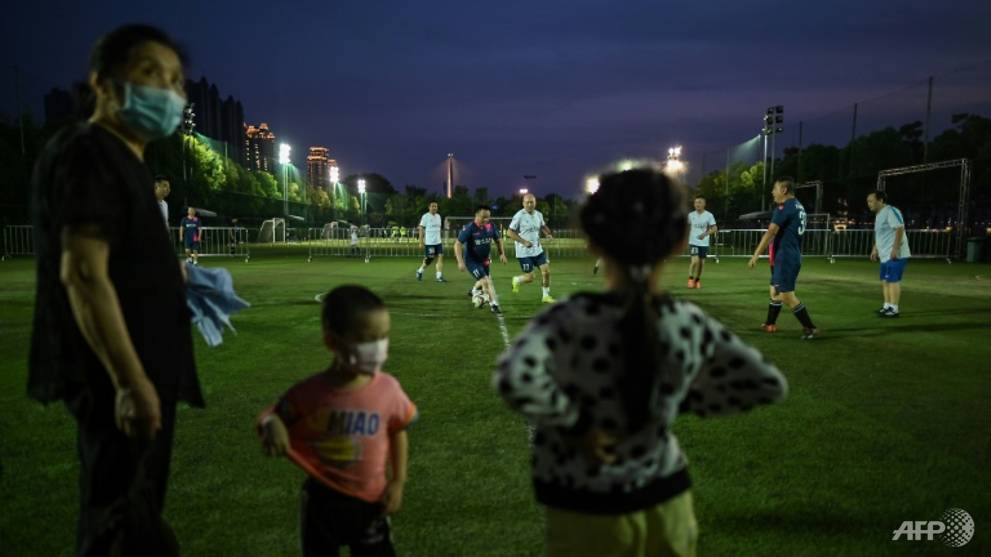 WUHAN, China: For nearly three months football enthusiasts in Wuhan were left kicking their heels indoors as the coronavirus raged in the Chinese city at the epicentre of the outbreak.

But since the harsh lockdown on the city of 11 million people ended in early April amateur footballers have been gleefully ripping off their face masks and lacing up their boots again.

“It was a long time to be in lockdown so we had to do some exercise at home,” said Wang Zijun, 42.

“I used to juggle the ball with my son at home and pass the ball to each other, and sometimes we went to the underground garage to do exercise.”

Another player who finally enjoyed a run-out on a warm evening under floodlights said it was liberating to be able to kick a ball again with friends and team-mates.

They did so without their masks covering their faces, although some players kept them dangling around their necks.

“Before the lockdown was lifted everyone felt so oppressed,” said the 45-year-old, who would only give the surname Wen.

“We need to do physical exercise. After the lockdown was lifted, we resumed training one time per week. I’m very happy.”

Professional footballers were affected too.

Wang Shuang, a Wuhan native and star of China’s women’s team, who are pushing for a place at the Tokyo Olympics, resorted to kicking a ball against a wall on a roof.

Chinese Super League (CSL) team Wuhan Zall and third-tier Wuhan Three Towns have both returned to the central city after being forced to train elsewhere at the height of the outbreak.

The CSL season was supposed to begin on Feb 22 but has been indefinitely postponed by the health alert, which has since eased in China.