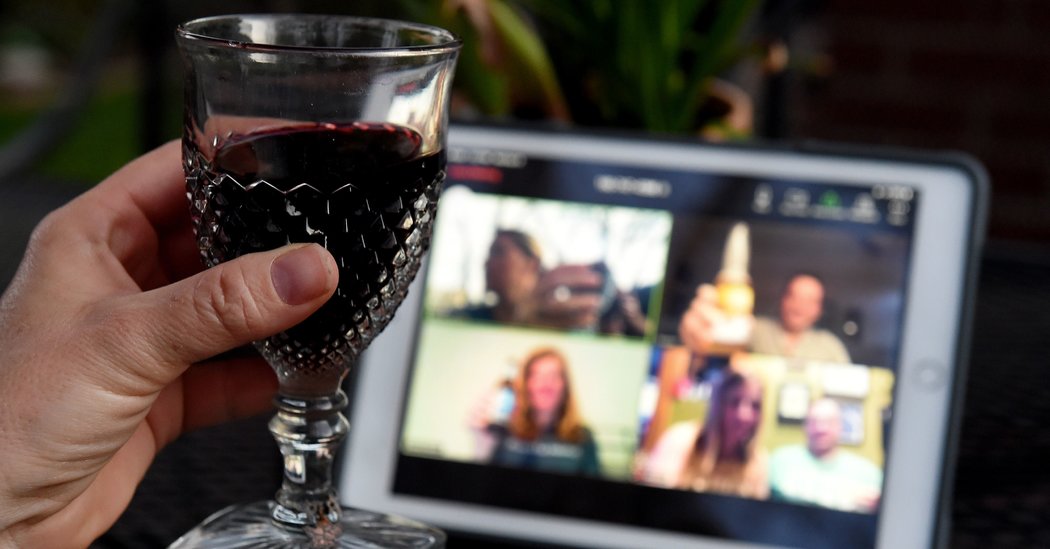 The boredom of staying home and the intense anxiety produced by the pandemic have given rise to Twitter jokes about drinking before noon as alcohol sales have spiked.

But addiction experts say they are worried it could also trigger more serious drinking problems and even create new ones for people who have never struggled with alcohol dependency before.

“I expect we’re going to see pretty significant increases in what I call unhealthy alcohol use, which means drinking above recommended limits,” said Dr. Sarah Wakeman, an addiction medicine doctor at Massachusetts General Hospital in Boston.

“It will be pretty unlikely for someone who has never tried alcohol before to start drinking for the first time and immediately develop an alcohol use disorder,” Dr. Wakeman said. “I would see this as a risk more in people who are already drinking and then their alcohol use escalates.”

Before the pandemic, Mhairi McFarlane, a 44-year-old novelist in Nottingham, England, had been thinking of cutting back. But the first weekend she was in quarantine, she said, she was “cheerfully” having three or four drinks a night, usually gin and tonics or “very cold bottles of cava.”

“It was very much not my style of drinking,” she said. “I’ve always associated drink with going out and being social. I was never really one for opening a bottle of wine in front of the television.”

Drinking alone worried her. Then she woke up one Thursday with a headache and a sense that her body was unhappy with what she was doing. She decided to give herself a two-night break from drinking. To her surprise, she wanted to keep going. It has been two months since she had a drink.

“My brother said of all the shocks of 2020, ‘none have been as great as you becoming the poster girl for sobriety,’” Ms. McFarlane said.

Kelly Rubinsohn, an opera singer in Philadelphia, said she normally drinks wine. But in isolation she has been playing with cocktail recipes, making Manhattans and experimenting with barrel-rested gin.

She was furloughed from her job as an office manager at an architectural firm, and a series of singing auditions she booked before the pandemic were canceled.

Drinking has been a salve during a difficult time, said Ms. Rubinsohn, 32.

“There is literally nothing else to control,” she said. “I can at least make a cocktail.”

Alcohol sales spiked in late March, rising 55 percent compared with the same period a year earlier. But it was unclear if Americans were consuming more alcohol or if the jump in sales was indicative of a change in the way people were buying wine and spirits now that they could no longer drink in bars and restaurants. Analysts said that a change in shopping habits, as Americans took to stockpiling to limit the amount of time they spent in stores, most likely accounted for some of the increase.

Sales of beer, wine and spirits have since slowed though they still remain much higher than a year ago, according to Nielsen, the market research firm.

In April, Morning Consult, a digital media and polling company, found that only 16 percent of 2,200 respondents said they were drinking more, while 19 percent said they were drinking less. A narrow majority, 55 percent, said their drinking habits remained unchanged, according to the poll, which had a margin of error of plus or minus 2 percentage points.

Still, addiction specialists say they are watching carefully to see how isolation will affect drinking and drug use in general.

Historically, drinking and drug use rise when people experience wars, terrorist attacks or natural disasters, but those are typically localized events, said Adam Leventhal, director of the University of Southern California Institute for Addiction Science.

“A pandemic of this magnitude affecting the entire globe is something we’ve never encountered before,” he said. “Every person is being affected by it.”

A study published last month in the Asian Journal of Psychiatry showed a sharp increase among people in China, where the pandemic originated, who reported “harmful drinking” during isolation. People between the ages of 21 and 40 were particularly susceptible, the study found.

Harmful drinking is generally defined as drinking to excess in a way that leads to health problems. Alcohol dependency, or alcoholism, is characterized by cravings that are difficult to control and a preoccupation with alcohol that leads to continued drinking even when a person knows it will have negative consequences.

“Social isolation, limited interaction, financial distress are causing excessive stress, which has direct correlations with alcohol consumption,” said Md Zahir Ahmed, an author of the study, which showed that the rate of harmful drinking and dependence went up 6.7 percent during the lockdown in China.

The pandemic has reduced access to social support networks, while alcohol remains fairly easy to get. That combination means “there remains a threat to develop new substance-use disorders,” even among casual drinkers, Mr. Ahmed said.

People should not feel shame or jump to the conclusion that they are addicted to alcohol because of a few nights of heavy drinking, Dr. Wakeman said.

“Everyone is cutting themselves some slack because these are crazy times,” she said. “But the same way we do with food and exercise and concerns about obesity, we want to have some benchmarks for how to stay healthy.”

People should seek help if family and friends express concerns about their drinking, if they continue to want to drink even if it causes problems, or if their drinking begins to get in the way of everyday responsibilities, like taking care of their children or working, Dr. Wakeman said.

Members of Harm Reduction for Alcohol, a Facebook group that supports people who want to reduce how much they drink instead of abstaining, have traded ideas for how to curb drinking during the pandemic.

One said he was measuring his drinks. Another quit buying vodka. Another started a garden to take her mind off alcohol.

“Most of our people are pretty aware of how much they’re drinking,” Mr. Anderson said. “They know they’re stressed. They know it’s a rough time.”

There are signs people want alternatives to alcohol. While wine, beer and spirits continue to sell at a much brisker pace than at this time last year, sales of nonalcoholic beer were up 42 percent in the week ending May 2 compared with the same period in 2019, according to Nielsen. Ritual, a company that specializes in alternatives to liquor, reported an 88 percent bump in sales in April.

Andrew Beile, 31, a former bartender, started the Facebook page “Quarantined Beer Chugs” as a way to replace the bar culture he lost when the pandemic shut down pubs and breweries around Liberty, Mo., where he lives.

The idea was for friends to film themselves drinking and then post videos online. Mr. Beile said he thought at most 50 people would join the group. The page now has 330,000 members.

“Once it got big, we decided we needed to encourage people not to drink seven times a week,” Mr. Beile said. “So we changed our motto to ‘All chugs are welcome.’”

Followers are encouraged to chug water three times a week on “hydration days.”

“I don’t want people to drink themselves into a depression,” Mr. Beile said. “I know it’s unhealthy.”

“When there is not a professional bartender pouring your drinks,” he added, “it’s very easy to overdo it very fast.”