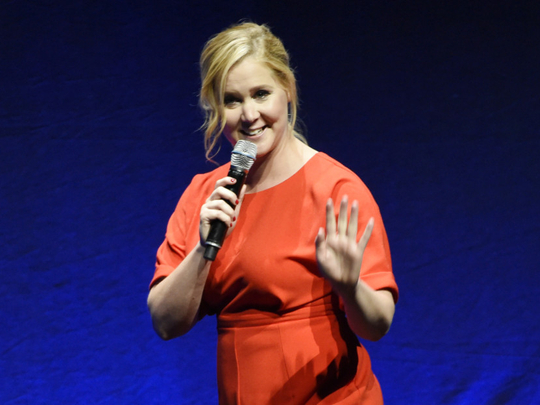 It didn’t take long for Amy Schumer to shut down her old life.

“The first day I heard the term Wuhan market, that was it,” she said in a recent interview. “I was one of those people who was like: Pack your bags.”

Before long, she and her family had left New York and moved to Martha’s Vineyard, Massachusetts, where her husband, chef Chris Fischer, is from.

Her stand-up has obviously ceased, and a Hulu show has been put on pause. But she has been active, adjusting to the new limitations.

‘Amy Schumer Learns to Cook,’ a weekly cooking show with her and her husband on the Food Network, and in July, her documentary about being pregnant as she prepared to make a comedy special will run on HBO Max.

While her nearly one-year-old son napped, she talked over Zoom about life under lockdown. Here are edited excerpts from the conversation.

Q: How are you holding up?

A: If 10 is totally fine, I’m a 7. I’m worried about my dad, who is in assisted living where 15 people have died. My mom is alone. It’s upsetting. And my friends who are nurses, a lot of them had it. But my day-to-day is nice. It’s nice to have a baby, because it gives you a routine, and he doesn’t know what’s going on.

Q: Your son Gene’s middle name was Attell, in honour of comic Dave Attell. But you recently changed it. Why?

A: I was proud of that name. Then a month in, I’m looking on the computer at it and I started freaking out. Gene Attell. We named our baby Genital. A month later, I’m like: We got to change it. You can’t name your son Genital. I didn’t want to ‘boy name Sue’ him. So now it’s Gene David.

Q: What do you miss most from the pre-lockdown world?

A: Stand-up. I should have said my dad, but that’s not the truth.

Q: Are you still writing jokes?

Q: Let’s do it. What’s a joke premise you have come up with recently?

A: These celebrities doing videos saying, ‘Stay at home,’ and behind them is a moat and a diving board. There’s a woman going, ‘That’s why we all need to shelter-in-palace.’

Q: Celebrity can be isolating. Does being famous prepare you for social distancing?

A: It’s dangerous to compare, because, whatever, but it is true. I don’t know if you’re watching ‘The Last Dance.’ I’m really enjoying it. I hadn’t thought of the politics of the salaries and how the star can call all the shots. But also seeing Michael Jordan in and out of the hotel, in and out of the car. Very isolating life. You can’t trust people. It feels like everyone feels that way now.

Q: That scene in the hotel alone at the height of his fame, Jordan looks sad.

A: You’re like: I don’t know why I am feeling bad about this billionaire in a Four Seasons, but I am.

Q: What else have you been watching during quarantine?

A: I have been going to the live Instagrams of Questlove, D-Nice and Talib Kweli at night. Literally, I will put on a bra on so I can dance alone in my room and let myself feel present and feel good. Talib Kweli is playing the best hip-hop of the ‘90s. And I watched ‘Normal People,’ a beautiful show.

Q: Woody Allen also released a book. Is the pandemic good for the problematic?

A: It does seem like a safe time for the #MeToo guys. They are coming out of their foxholes. I don’t want to be a person who eases anyone’s way.

A: No. It doesn’t work that way. People will always get offended, and no, this is not this great equaliser. They’ll get offended just as much, maybe more.

Q: When live comedy returns, will it look different?

A: I think it will come back and be fine. But it will take while. Are we going to open it up and people are going to wear bandannas over their mouths so you can’t even hear a laugh? You need masks with good acoustics.

Q: There’s a debate now about how fast we should open up.

A: I don’t want to be back on a set until I’m sure everything is safe. I’m not going to go to the Comedy Cellar for a year at least. It’s the biggest risk. If I didn’t have a baby, I might be a little more chill. You care if you die less if you don’t. But now, I’m like, I better stay alive, I guess.

Q: If someone sneezes while you’re performing at a club, what’s your reaction?

A: I’ll probably stop talking onstage and just leave. Actually, no, I’ll throw the mic at the person who sneezed and run out the room scream-crying.

Q: Do you see clubs closing and careers ending from this?

A: What are you going to do if you’re making your living on the road? There are so many different outlets that the strong will survive. They’ll pivot and evolve. Some comics are finding their footing in this space. Cole Escola, Megan Stalter — there are these interesting comics that maybe wouldn’t be seen by the audiences they are now.

Q: Does the pandemic bring people together or reveal our divisions?

A: Both. The divide is clearer. I used to have this urge to bridge. But it’s so out of control and impossible. Someone who thinks we should be allowed to leave our houses and do whatever we want is, I guess, a Trump person. I’ve tried to understand what the thinking is, but I don’t have the capability of changing anyone’s mind. I wish them the best, and they don’t have to worry about me trying to have a conversation.

Q: Is there anything good that comes out of this pandemic?

A: No one’s going ‘Worth it!’ More people dead than Vietnam. Worth it! But there are totally beautiful parts to this. Every day I text with my girlfriends from back home. We just stop and share memories. And we don’t really talk about COVID or what’s going on. We just want to talk about… when we tried our first cigarette, and who was the worst drunk. Keeping it light. Just old memories. Just giving time to our memories. I’m just enjoying thinking about different times.