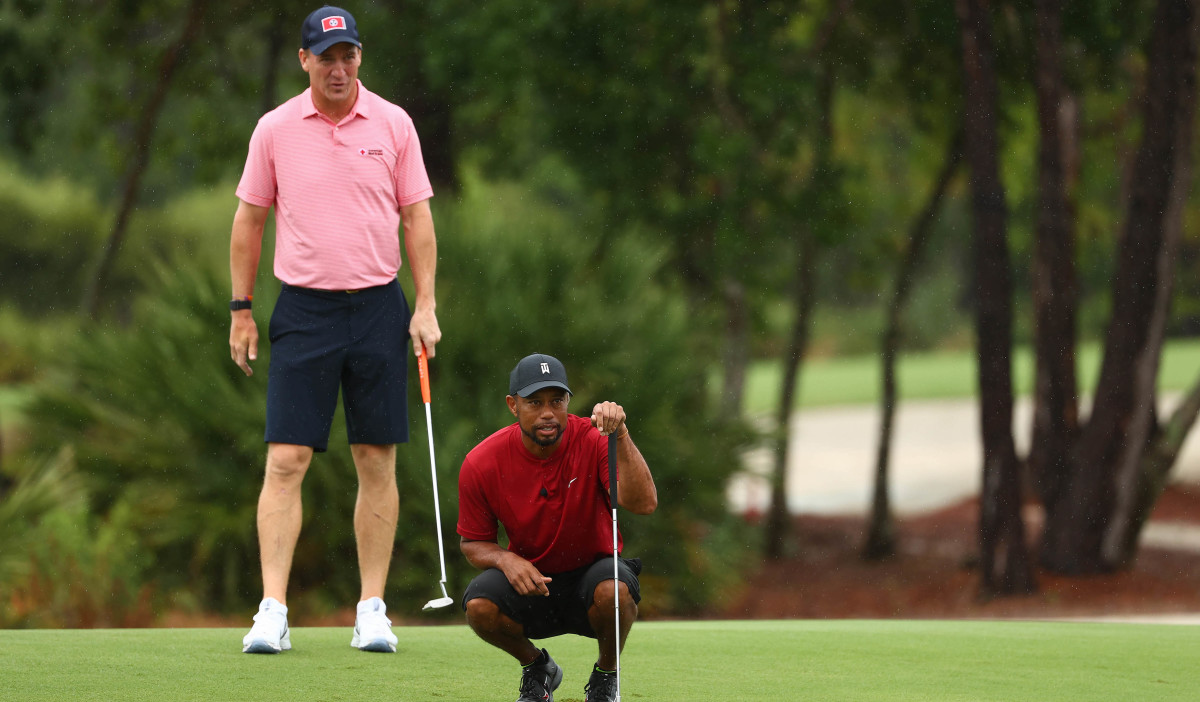 The Tiger/Peyton-Phil/Tom Golf Thing was the best sporting event in weeks, surpassing Michael Jordan laughing at people he hasn’t seen in 20 years. This was not just quirky and entertaining. It was a surprising reminder of how much fun sports are supposed to be.

These guys cared about winning enough but not too much. They teased each other but not too much. They were relaxed. They raised eight figures for charity, which is of course the best part of what happened. But for viewers, it was compelling television for the strangest of reasons: This was, in a weird way, a better advertisement for golf than most PGA Tour events.

The game is supposed to be hard enough to make the good shots feel great. That is not the case at the typical PGA Tour event these days. What we get instead is the best players in the world using technology that gives them a big margin for error on courses that are not a real test of their skills. Most majors are great. Most other events are not.

Golf is supposed to be a game of camaraderie, of intermittent laughs amid the tests of concentration. Most PGA Tour players are quite engaging, but their personalities don’t come through like we saw Sunday, when four of the most famous athletes on the planet were mic’ed in a four-hour-plus competition.

We got to see Brady and Manning, famous control freaks who impose their wills on entire teams, defer to their partners. The banter between Woods and Manning was minimal, but Mickelson coached Brady so hard, I kept wondering if Brady would leave him for Bruce Arians.

And that brings us to the real key to this show’s success: Brady was awful to start the match. He was a peculiar kind of awful that is almost unique to golf: You could tell he was capable of playing a lot better, but his game was hiding from him. And it hid from him in a nationally televised match alongside the two best golfers of their generation and his longtime friend and rival. He looked like the pressure was rattling him. Tom Brady. Imagine.

Mickelson, to his credit, understood that he had to leave his teammate alone, keep things loose, and hope Brady somehow found his swing.

Most golfers would not recover from Brady’s start. But Brady summoned his inner … uh, Tom Brady, holing out for birdie from the seventh fairway and playing pretty well from there out. Brady and Manning hit some truly clutch shots on the back nine. The juxtaposition of their solid-amateur games with Tiger and Phil’s Hall of Fame skills turned out to be riveting.

Brady and Manning have the quirks of amateur golfers. Brady carried blade irons, including a two-iron, but no driver – who has that combination in their bag? Manning aimed right on almost every tee to play for his natural (and sometimes uncontrollable) draw. Medalist Golf Club is a brutal layout, and at times the course made them look overmatched. But golf is supposed to do that.

And because Brady and Manning played like the amateurs they are, they reminded us just how insanely good Woods and Mickelson are. The skinny on Tiger at this point is pretty straightforward. When he is healthy, he can play as well as anybody in the world, especially from the fairway. But on days when his back isn’t right, he looks old. He has had both kinds of days this year, and will have both going forward. But this was a good day. Except for the time he left Manning with a bunker shot during alternate-shot play, Tiger had astounding control of his ball.

Tiger was quiet and occasionally sarcastic, which is how he usually is with the cameras on. Manning reminded us why the networks coveted him; he may be a more natural public speaker than quarterback. Brady does not need to remind the world he has won three times as many Super Bowls as Manning. Instead, Brady told a story about Drew Bledsoe pulling a prank on him when he was a rookie. It was a juvenile prank, as these things tend to be, but when broadcaster Amanda Balionis asked Brady if he got revenge on Bledsoe, he should have said, “Yeah, I took his job and won six Super Bowls.”

Mickelson, whose mind is constantly churning, described a few shots in fantastic detail before he hit them. He had the most enthusiasm of the crew, and it’s easy to envision Mickelson, who is moving to Florida, playing in money games into his 80s. He loves the trophies and the money, but mostly he lives for the action.

The match began in a downpour and ended in another one. When Woods lagged a putt to gimme range for the win, there was a sense that charities were not the only ones who got their money’s worth. There were some pretty bad shots, some really great ones, and in the end, everybody who played was clearly glad they did. That is how golf should be.