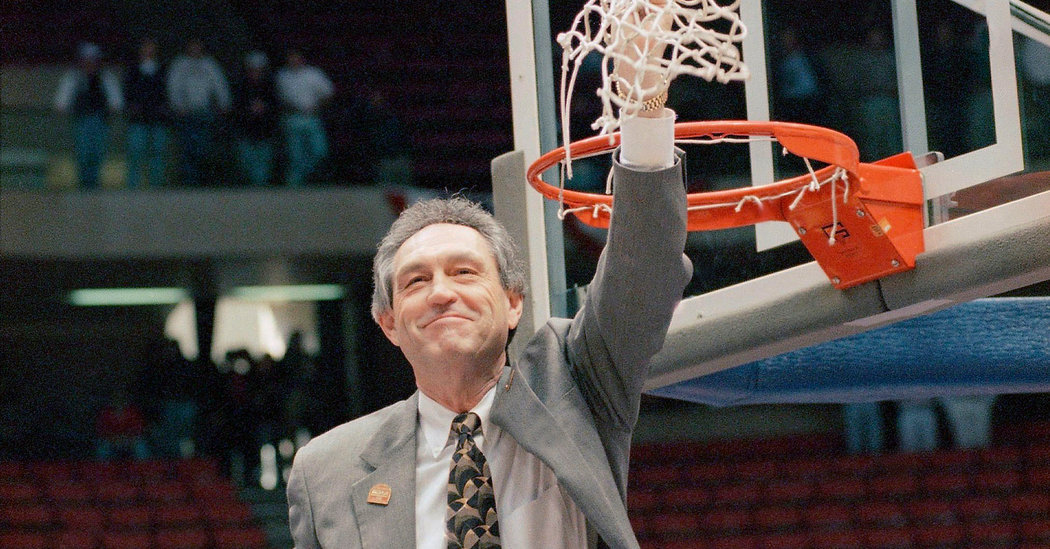 Eddie Sutton, who coached major college basketball teams to a total of 806 victories in a career spanning 37 seasons and became the first coach to take four schools to the N.C.A.A. Division I championship tournament, died on Saturday at his home in North Tulsa, Okla., a month after his election to the Naismith Basketball Hall of Fame. He was 84.

His family confirmed the death in a statement but provided no other details.

Sutton coached Creighton, Arkansas, Kentucky and Oklahoma State to a total of 26 N.C.A.A. championship tournaments and reached the Final Four three times — with Arkansas in 1978 and Oklahoma State, his alma mater, in 1995 and 2004. Several other coaches have since led four or more schools to the tournament.

But he experienced troubled times that could have contributed to his being passed over for induction into the Hall of Fame six times as a finalist before he was finally elected in early April. His posthumous induction will come in August.

Although he was not accused of wrongdoing, Sutton resigned from his coaching post at Kentucky after the 1988-89 season, when the basketball program was hit with major penalties by the N.C.A.A. for a host of rules violations, many involving recruiting.

“I am innocent,” he told CBS at the time, but said he did not want to fight for his job out of concern that a continuing controversy would hurt the university and its basketball fans.

Sutton struggled with alcoholism for many years. In February 2006, while he was coaching at Oklahoma State, his automobile struck another vehicle after he had been drinking. He pleaded no contest to driving under the influence, took a medical leave, resigned in May and was succeeded by his son Sean, who had been an assistant coach. Sutton was fined by the court, and his coaching career was seemingly over.

“Maybe it was God’s way of saying, ‘You’ve got better things to do than just coach — you’ve coached long enough,’” Sutton told The New York Times in December 2006.

But the University of San Francisco hired him on an interim basis during the 2007-8 season when its head coach took a leave of absence. He won eight games with the Dons that season and then retired for good.

Edward Eugene Sutton was born on Oct. 12, 1936, in southwest Kansas, in the city of Bucklin, the only child of Orville and Beryl Sutton. His father was a farmer and an electrician; his mother was a cook at a public school.

He played basketball for three seasons at Oklahoma State (known as Oklahoma A&M when he arrived there) in the 1950s under the future Hall of Fame Coach Henry Iba, then served as an assistant coach for him in the 1958-59 season.

Sutton was a high school coach afterward, then became the founding head coach at what is now the College of Southern Idaho, in Twin Falls, building a nationally prominent team in the junior college ranks.

A big moment for Sutton was when his unranked Arkansas team edged unbeaten and No. 1-ranked North Carolina, led by Michael Jordan, 65-64, in February 1984 at the Pine Bluff Convention Center, one of the Razorbacks’ three home courts. Dick Enberg, broadcasting the game, famously coined the ensuing celebration “Pandemonium at Pine Bluff.”

Sutton held his highest-profile coaching post in his four seasons at Kentucky. His Wildcats won two Southeastern Conference tournament championships and went to the N.C.A.A. tournament each time in his first three seasons in Lexington. Then came the calamitous 1988-89 season. While the N.C.A.A. investigation was underway, Sutton’s team went 13-19.

He coached Oklahoma State, in Stillwater, to the N.C.A.A. tournament 13 times, and his 368 victories with the Cowboys are the second-most in school history, behind Iba’s 654.

Sutton’s time at Oklahoma State was marked by a tragedy. Two players, six staff members and broadcasters and two pilots were killed when the plane taking them back from a game against Colorado in January 2001 crashed in a snowstorm soon after takeoff from Denver.

“I’ve had some tough experiences in my life, but that was the toughest thing when I got a call and was told that plane had gone down and everyone was gone,” Sutton was quoted as saying.

In addition to his son Sean, Sutton is survived by his sons Scott and Stephen and nine grandchildren. His wife, Patsy (Wright) Sutton, died in 2013.

In his later years, Sutton often spoke to groups of students at Oklahoma State to share his hard-won insights into addiction, whether it involved alcohol, drugs or gambling.

He remained popular among fans of Cowboys basketball and attended home games sitting in a wheelchair, which he needed because of longstanding back problems.

As the Oklahoma State head basketball coach Mike Boynton told the newspaper The Oklahoman in April, when the Hall of Fame finally recognized Sutton’s achievements, “You have no idea how many people in Stillwater love Oklahoma State just because of Eddie Sutton.”