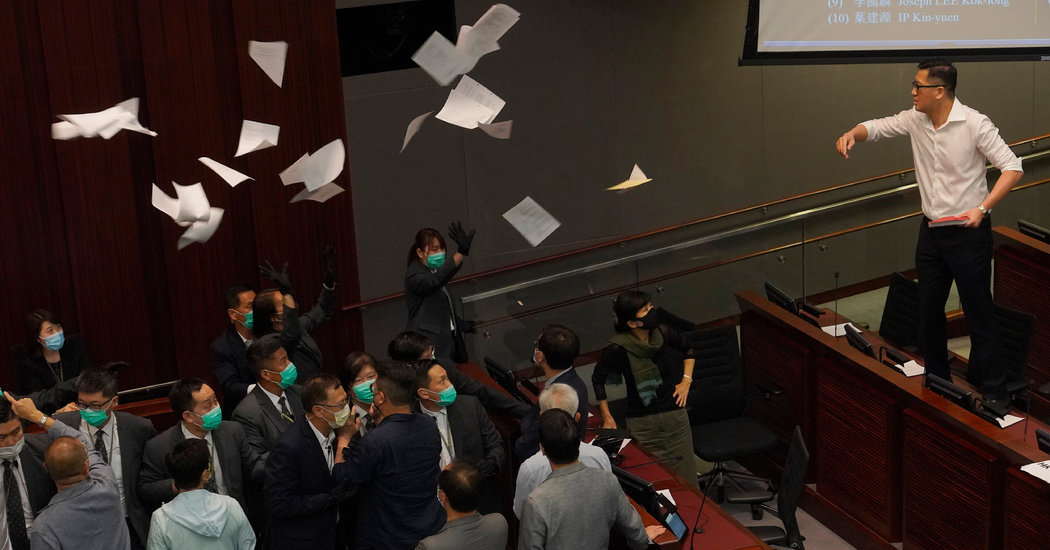 Scuffles erupted Monday between lawmakers in Hong Kong as they debated the leadership of a committee that is to consider legislation that pro-democracy politicians fear would tighten China’s control over the semiautonomous territory.

The brawl was the second to break out in Hong Kong’s legislature this month; a similar scuffle erupted on May 8 when lawmakers also battled over the leadership of the committee.

Hong Kong’s pro-democracy camp has accused establishment lawmakers of illegitimately seizing control of the committee, which for months has been led by Dennis Kwok, a pro-democracy lawmaker. Chinese officials and pro-Beijing lawmakers have accused Mr. Kwok of blocking new legislation, including a bill that would criminalize disrespecting the Chinese national anthem.

Hong Kong officially adopted the Chinese national anthem, March of the Volunteers, in 1997 when the former British colony returned to Chinese control. But some of the city’s residents never accepted it as their own, often booing loudly when it is played at soccer games and other public events.

The proposed legislation would criminalize such practices, which have become more popular as tensions between the city and Beijing have strained, and those who insult the song could face steep fines or up to three years in prison.

Monday’s turmoil broke out as a pro-Beijing lawmaker, Chan Kin-por, prepared to preside over the committee’s election for a new leader to replace Mr. Kwok. Pro-democracy lawmakers approached with signs and a black cloth to drape over the speaker’s dais in protest, but they were blocked by more than a dozen security guards who flanked Mr. Chan.

At least four pro-democracy lawmakers were then carried or dragged off the floor of the Legislative Council.

Lam Cheuk Ting, a pro-democracy lawmaker, ripped out pages from the legislature’s rule book and scattered them into the fray. Other lawmakers shouted that Mr. Chan and the pro-Beijing camp had improperly seized power over the committee.

Starry Lee, a pro-Beijing lawmaker, was ultimately elected the committee’s new chairwoman after many pro-democracy politicians were removed from the chamber.

Mr. Kwok, who was replaced as acting chair, said that the election violated the practices of Hong Kong’s legislature.

Whenever the “pro-establishment camp don’t like something, they will do whatever it takes, including breaking the system that we have and the rules that we have,” Mr. Kwok said. “The price of freedom is constant vigilance.”

Pro-Beijing lawmakers criticized the opposition for starting the fight and disrupting an election that was sanctioned by the Legislative Council’s president. They suggested that the black cloth carried by pro-democracy lawmakers was meant to conceal violent acts.

The tensions convulsing the legislature come as Hong Kong’s protest movement — which had been largely stilled as the coronavirus epidemic gripped the territory — has shown new signs of a resurgence in recent weeks as coronavirus infections have dropped in the city.

Calls have recently emerged for protesters to surround the legislature next week to prevent the passage of the contentious national anthem bill.

Later on Monday, fifteen prominent pro-democracy politicians and activists appeared in court ahead of a trial over their involvement in antigovernment protests that roiled Hong Kong last year. They vowed to supporters that they would continue to fight for the city’s freedoms as a small group jeered outside the courthouse, calling them “traitors” and “sinners of a millennium.”