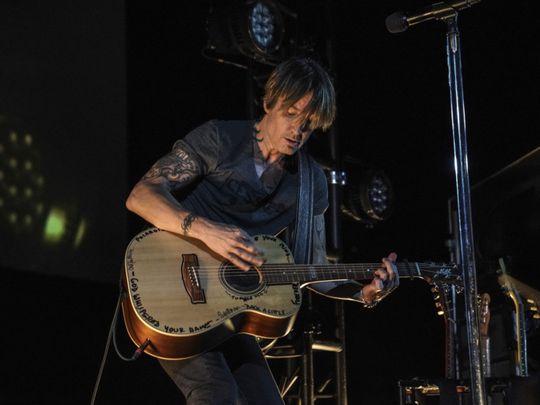 Country star Keith Urban is used to playing massive stages full of lights, speakers and screens in front of tens of thousands of screaming fans, but his latest gig was mostly just him and two other musicians playing on a flatbed truck in front of about 125 cars.

Urban played the Stardust Drive-In movie theatre, about 40 miles east of Nashville, Tennessee, Thursday night for a crowd of more than 200 medical workers from Vanderbilt Health.

“It’s like glorified karaoke,” Urban said, of the set-up that included a band member playing pre-recorded tracks and another guitar/keyboard player.

In the wake of the new coronavirus outbreak, Urban hadn’t played a live show since February. Urban said it took him and his promoter Live Nation about a month to plan the surprise drive-in concert, although more drive-in concerts are currently being planned throughout the country.

“All the cars are tilted forward so they’ve all got a great view and you’ve got this freakin’ killer video wall behind the stage,’’ said Urban.

During the 75-minute show, Urban played some of his hits, including ‘Blue Ain’t Your Color’ and ‘The Fighter’, but also played new songs off his upcoming record `’The Speed of Now, Part 1’.

Urban said the thrill of playing live again was amazing, even as the crowd looked — and sounded — a little different. He asked the health care workers to send him selfies of themselves, which he put on the screen behind him.

“There would just be a random lights flashing out there, then a horn and a cheer over there, and then I realised it was all these people popping up on screen behind me,’’ he said.

Urban said that he wanted to thank all the health care workers who have been on the front line of the coronavirus pandemic.

“Walking on stage, it was just huge gratitude, particularly for that audience last night,” said Urban.