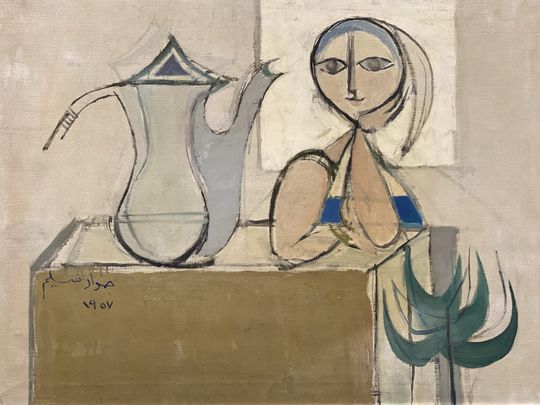 Meem Gallery is presenting rare works by some of the most influential modernists of the Arab world in the third edition of its ‘Modern Masters’ exhibition series.

In collaboration with the artists, artists’ estates and private collections, the gallery has brought together a collection of paintings, prints and sculptures that offers insights into the evolution of modern art in the Middle East and North Africa during the twentieth century.

These Arab artists belong to a generation that benefited from the newly-established art institutions in the region and had the opportunity to study abroad and be exposed to Western 20th century modern art movements.

Although they experimented with contemporary Western techniques and new vocabularies of abstraction, their desire to express their own emerging post-colonial identities led them to take inspiration from the cultural traditions, histories, and landscapes of their own countries and the socio-political issues of the time.

This approach resulted in an artistic renaissance across the region marked by the emergence of important modern movements and the development of a uniquely Arabian visual aesthetic.

A good example is Said’s 1930 painting El Nourag (The Plough) depicting a peasant in traditional garb guiding his oxen. It captures the simple rural life in Egypt’s Nile valley and the harmony between man and nature in a post-Impressionist style that reflects his training in Italy and Paris.

Similarly, a 1969 portrait by Kayyali, who studied in Rome and taught at the Higher Institute of Fine Arts in Damascus, depicts a young ice-cream seller. The melancholy yet dignified figure of the boy passively staring into the distance is an excellent example of the many portraits he made of ordinary Syrians.

Baghdad was a key centre of modernist art and architecture in the region and the Iraqi artists in the show played a critical role in the rise of a post-colonial national Iraqi identity. Hassan, who studied in Paris and established the Department of Painting at the Institute of Fine Arts, Baghdad founded the Societe Primitive in the 1930s later called the Pioneers Group, which encouraged members to come out of their studios and paint from village life and nature.

His painting in the show, Fisherman from 1958 depicts a typical scene of fishermen casting their nets at dawn. Similarly, Moscow educated Sabri’s 1960 painting, The Water Carriers shows a sunny rural landscape with a group of women in traditional Iraqi attire carrying pots of water on their heads.

Selim, who is considered the founder of modern art in Iraq studied painting and sculpture in Paris, Rome, and London and as a teacher at the Institute of Fine Arts had a major influence on the next generation of artists. Along with his colleague and former student Al Said, he established the Baghdad Modern Art Group in 1951, which played a key role in establishing modern Iraqi aesthetics that combined ancient Iraqi motifs with Western artistic movements.

His untitled painting from 1957 depicts a simple domestic scene with a traditional coffee pot in a cubist style. Paris educated Al Said, formed the One Dimension group in 1971, which focused on the exploration of the Arabic letter. His paintings in the show are from his well-known Walls series depicting neglected war-torn buildings with illegible letters that comment on conflict and censorship.

Al-Azzawi, regarded as one of the country’s greatest painters also graduated from the Institute of Fine Arts in Baghdad and was a member of One Dimension. In 1969, he formed the New Vision group (al-Ru’yya al-Jadidah) with other artists who shared the vision of remaining true to their own era and individual styles within the framework of their heritage.

The artist who moved to London in 1976 after Saddam Hussein came to power is represented by a cubist painting from that year, The Guilty Memory depicting the bombing of innocent people, which recalls his memories as a reservist in the Iraq army.

Palestinian artist Kamal Boullata is known for his abstract works, but the show includes two early works on paper from 1962 featuring realistic, romantic depictions of the streets of Jerusalem that are poignant reminders of his lifelong fascination with the history, architecture and landscape of his native city.

Works by prominent Lebanese women artists Adnan and Caland as well as Abboud and Douaihy, Moroccan artist Cherkaoui, Salahi from Sudan and Iraqi sculptor Fattah highlight modernist experiments with abstraction in the region.

Meem Gallery is open by appointment only. For a 3D virtual tour go the gallery’s website.