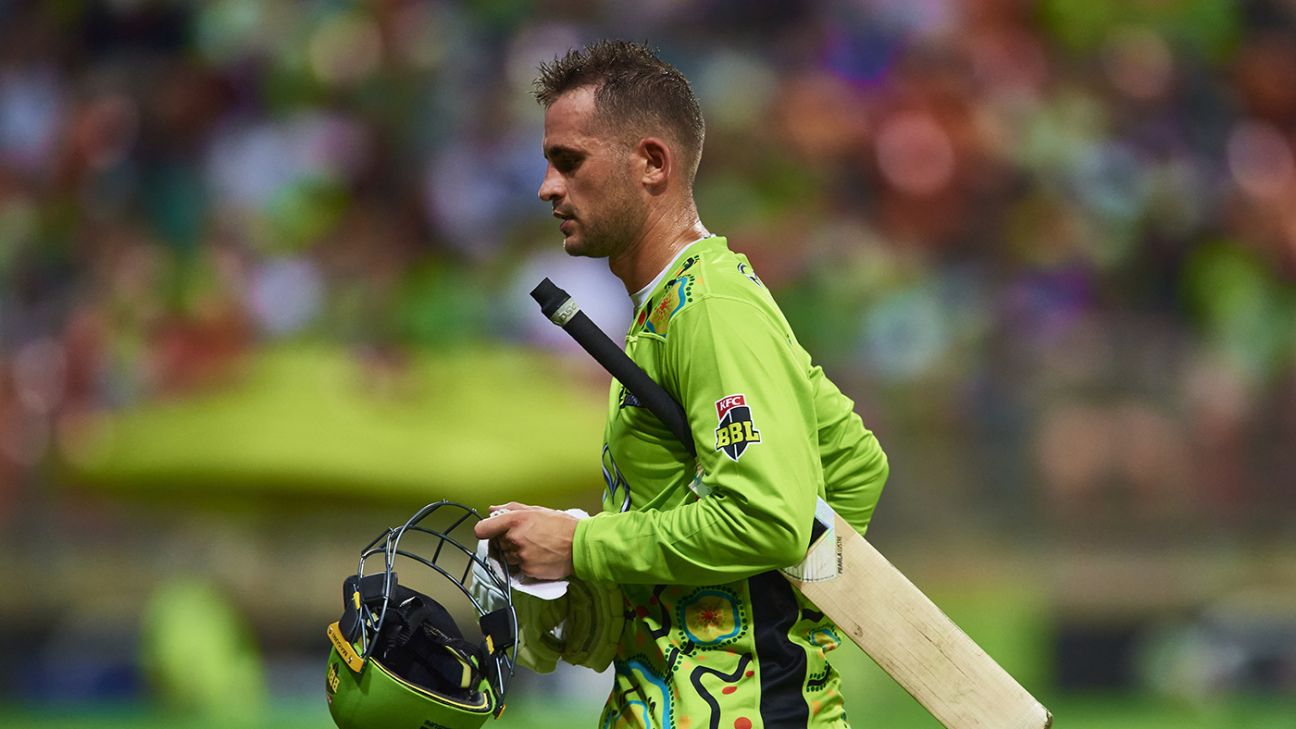 Alex Hales has claimed he has “matured as a player and away from the game” since his deselection from England’s World Cup squad after a failed recreational drugs test, and declared that the past six months have been “the best I’ve played in my career” as he presses his case for an international return.

Hales has not played for England since it became public in the weeks before the World Cup that he had been serving a 21-day ban due to a second violation of the ECB’s recreational drugs policy, which caused Eoin Morgan to publicly lambast his “lack of regard” for his international team-mates, citing a “complete breakdown of trust” for his omission from the World Cup squad.

This week, Morgan said that the “door is still open” for Hales, but reiterated that the crucial element would be rebuilding that trust. “I don’t think you can put a time limit on gaining back that trust, and that’s not just with me, that’s with every member of the squad, the backroom staff, the selectors,” he said.

In an interview with the Daily Mail, Hales said that he has matured in the last 12 months, but admitted it would be difficult to address his relationship with the rest of the England squad while outside the squad. Since the start of the Big Bash, Hales has averaged 42.89 in 22 T20 innings for Sydney Thunder and Karachi Kings, and said that he has never played better across his career.

“Like Morgs has said, I guess time is the biggest healer,” Hales said. “I just don’t know how long that is going to go on for, that’s the only thing. I honestly have no idea. Obviously I’d love to get my place back. Playing international cricket is the highlight of any player’s career and I still think I’ve got a lot to offer, particularly in T20.

“I certainly feel I have matured, as a player and away from the game, and hopefully I’ll get the chance to show that in the group environment again. It can be tough to rebuild that trust when you are not in the close-knit circles.

“This is the best I’ve played in my career. My England career has been pretty good so far in T20 and that’s not even playing to the best of my ability. I’d love to get that chance again. I’ve moved on and grown from the mistakes I’ve made in my private life and hopefully people can forgive and forget. Hopefully I get that chance again because I feel I’m in a good head space.”

The fact that the reason behind Hales’ ban was kept confidential last year led to a change in the ECB’s recreational drugs policy ahead of the 2020 season, under which Hales’ fine would have been doubled for his second violation, but he would not have had to miss any games. Hales’ absence was explained by Nottinghamshire as a break for “personal reasons”, but the trail was laid for reporters, and the reasons became public after the Guardian broke the story.

Under the new regulations, which the ECB said took into account “the important consideration of player welfare”, Hales’ fine would have been doubled but he would not have been banned, suggesting that the second failed test would have remained under wraps.

Hales said that his involvement in the Bristol incident and the resulting trial and Cricket Disciplinary Commission hearing “took a lot out of me mentally”, and suggested that he had struggled to cope with the public spotlight surrounding the case.

“Stuff like that, you maybe don’t appreciate at the time but it took an awful lot out of me mentally,” he said. “I’m not blaming that on some of the mistakes I made off the field, but it certainly didn’t help with how I felt away from the game. It was mentally exhausting. It put me in a really dark place.

“I feel on top of everything and the chapter of Bristol and its aftermath is firmly closed now. I am just looking forward to enjoying the next few years of my career and, more importantly, my life, and just see where it takes me. If you speak to any coach I’ve played under in the last 12 months, I feel I’ve matured as a player.”

Hales also said that while he never managed to get tested for Covid-19, he was “pretty sure” he had contracted the virus. Hales had told Pakistan Super League officials that he had developed symptoms upon his return to the UK, which led to the tournament’s semi-finals and final being postponed indefinitely.

“There was a point when it was 5am and I was lying in bed, drenched with sweat, feeling sorry for myself. But I knew deep down it wasn’t enough to put me in hospital. I never managed to get a test but speaking to a couple of doctors, they were 99 per cent sure it was Covid.”