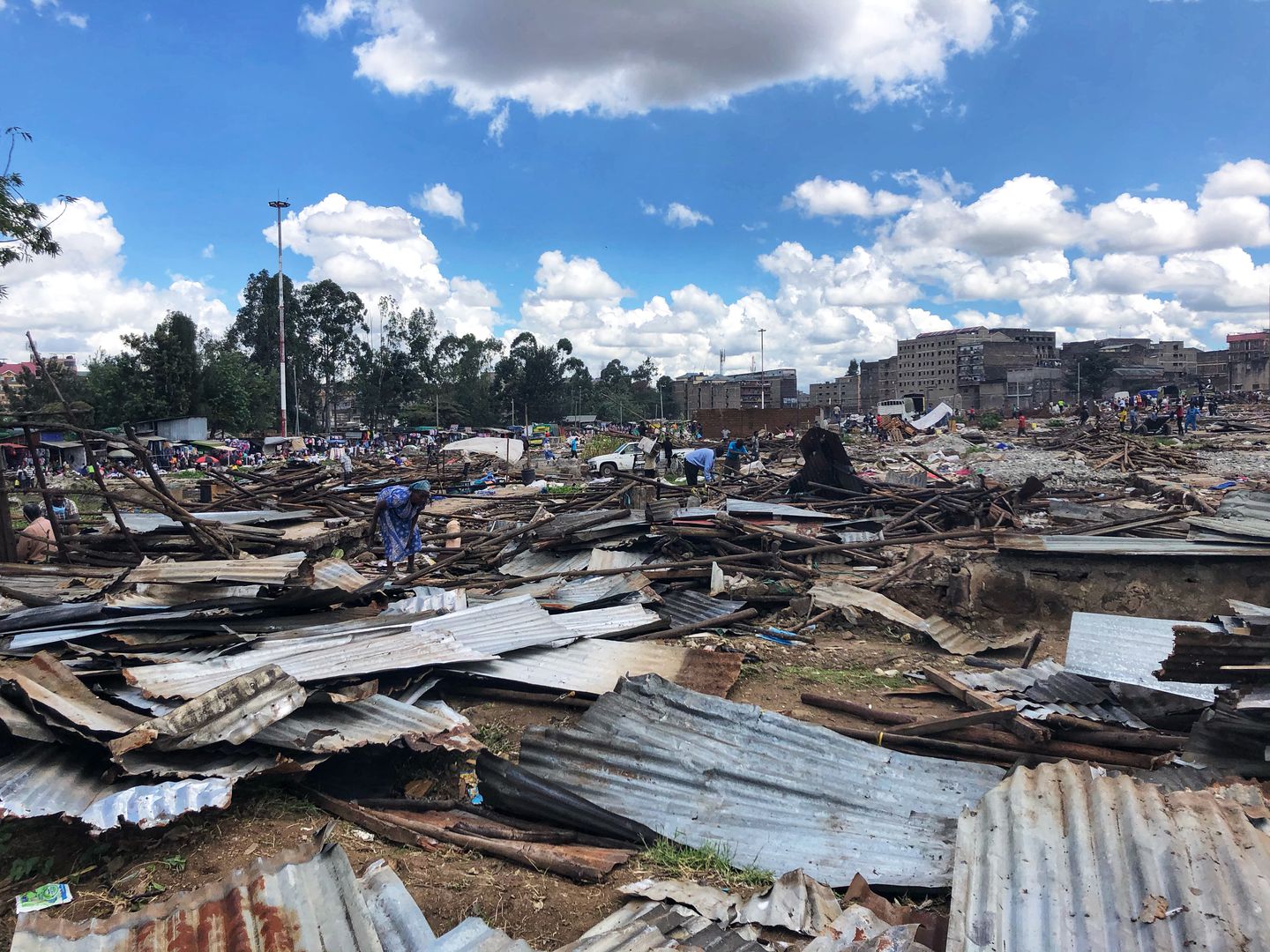 More than 8,000 people lived in Sewage, a warren of shacks amid miles and miles of slums that stretch east from Nairobi’s city center. Kenya’s capital is an obscenely unequal city, where the rich, who are few, lead gilded lives and the poor, who are many, face daily punishment for their poverty: slum demolitions, police brutality, corrupt politics and the diseases that spread because of the city’s failure to provide clean water.

With the arrival of the coronavirus pandemic in Kenya, the government has appealed for the public’s trust — that invisible but essential component on which any public health intervention relies. But decades of policies that disadvantage the poor have eroded any chance of gaining that trust in the city’s slums.

“If government wants us to believe corona exists, they wouldn’t have destroyed our homes,” said Awino, 26, carrying her 3-month-old baby. Since the demolition, she hasn’t been able to produce breastmilk. The baby has started coughing.

Her deduction is logical. If the government says everyone should socially distance and maintain hygiene, but they simultaneously force thousands to sleep outside, huddled together in the cold rain, then this disease must not be as serious as they say it is.

Kenya’s outbreak seems under control at just above 600 cases, but if it gets out of hand, the trust deficit will be the preexisting condition. Public health is more than testing and treatment. It requires faith that the government has the public’s best interests at heart.

Since a dusk-to-dawn curfew was implemented in late March, police have killed more than a dozen people in slums and rural towns across Kenya. Others have died in stampedes for food. While other countries ramp up welfare, Kenya is raising taxes on staples like flour, eggs, milk and cooking gas.

Across the communities of Kariobangi, Kayole and Kawangware, residents hissed at the government’s new restrictions, which have stripped uncountable thousands of their livelihoods. Just two dozen people are confirmed to have died from the virus in Kenya.

“I don’t know the name of one person who has died. All we can see is the government is getting billions of shillings to fight this disease, which for us does not exist,” said Wesley Onguso, who used to play for Kenya’s national soccer team and now drives a motorcycle taxi, making him one of the most at-risk to catch the virus.

Down the road, the government was conducting mass testing. Health workers have struggled to get people to show up — the opposite of the problem in other parts of the world, where tests are in huge demand. That’s because up until the day Onguso and I met, the government was making those they suspected of having the virus pay for their own quarantine in public facilities at a rate of more than $250 for 14 days.

Onguso and his friends laughed at the idea that they would voluntarily get tested.

“And then what? Pay 28,000 shillings? We don’t earn now. I can’t pay 50 for a mask. And because I cough once, I will pay 28k? Don’t judge us for not going,” he said. The government later promised to cover quarantine costs, but their delayed decision to do so allowed time for skepticism to pervade public perception of the mass testing process.

Across town, outside the office of the Nairobi Water and Sewerage Co., a small group of local leaders staged a sit-in, pleading for something even more basic than masks: water. One of their placards read, “Rule 1 of covid-19: Wash your hands. But where is the water?”

Residents of Kayole complain their taps have been dry for three months. With sanitation being promoted as a preventive method in the pandemic, they had appealed to their leaders to use the moment to help them petition the utility company.

Police stormed up to the second floor of the office building, handcuffed the activists, and later released them on a $50 bail bond, roughly the same cost of a year of running water in a house in Kayole.

“What is this cheap show you are putting on?” bellowed a gun-toting police officer, towering over the protesters, pointing his finger in their faces. “Why don’t you act like civilized people?”

And then to a colleague and me: “Why are you encouraging these people? Even I don’t have water in my home, and do you see me complaining?”

A senior official at the utility company, who spoke on the condition of anonymity to discuss sensitive issues, acknowledged that the company can’t meet the city’s demand for water, even during heavy rains. “We have no option but to ration,” she said.

As for the razing of Sewage, which was built legally on the utility company’s land, she said, “People are trying to make us look inhuman, but we had no choice. Those people are the victims of a political feud. There was a court order against the demolition, but the Ministry of Interior contravened it to strike at a political opponent who has support among those people.”

The government’s spokesman did not respond to a request for comment.

Amid the detritus of the razed neighborhood, hundreds of people walked toward a food distribution organized by the city’s recently deposed governor, who would prefer to hand out cognac than alcohol-based sanitizer.

To no one in particular, a woman passing by asked, “Where was he when the bulldozers came?”

Gospel music from a nearby church blared. Tin sheets crunched underfoot as the crowd passed.

Joseph Mungai pulled a handcart with all his belongings and vowed to rebuild wherever he could find space in another slum.

Francis Mugo Kamau recounted how he had first lost his land in post-election riots in 2007. He weighed nearly 200 pounds then and owned a shop, he said proudly. Now he weighs 130 and sells biscuits from a basket hung around his neck. He was hawking in Sewage because he knew people there were hungry.

Mary Wanjiru Maina sat on top of the remains of her house, ruined by the bulldozer, and began to cry. “I have three children . . .” she started, but it was too much pain.

On top of a fresh mound of dirt, Josphine Ochola, 53, a fried sardine vendor who lived in Sewage for 23 years, said, “We are standing on what was last week someone’s house, and that person is now sleeping in the open.”

Then, staring out at the rubble, she said the same words we heard at the end of each interview that day: “If corona is real, then surely they would have waited before doing this.”

Rael Ombuor contributed to this report.