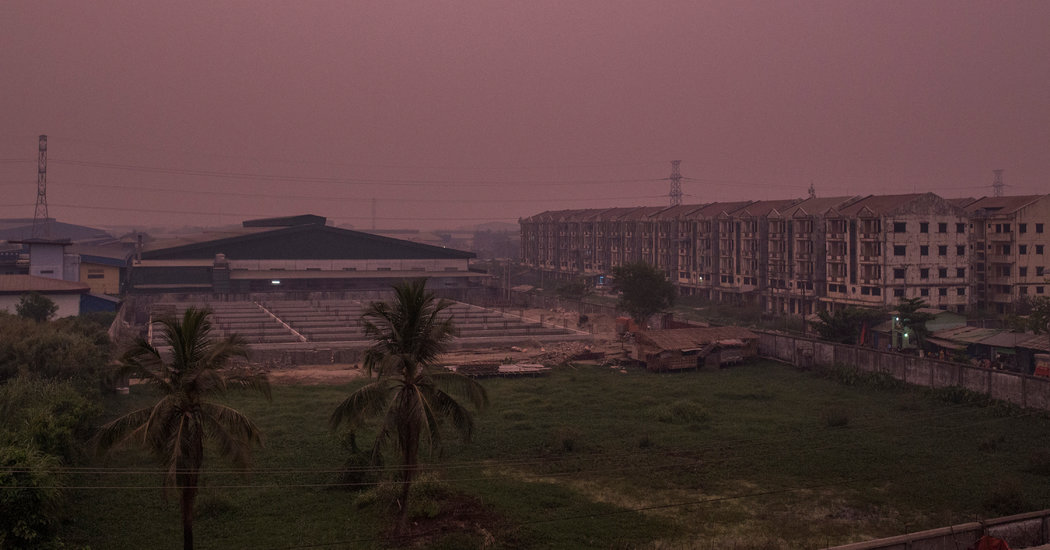 That was why it let go almost half of its 1,274 workers in late March, the factory’s managing director said in response to protesters who arrived at the factory’s doors to denounce the dismissals.

Three fired sewing operators, however, said the factory was taking an opportunity to punish workers engaged in union activity. In an interview, the operators — Maung Moe, Ye Yint and Ohnmar Myint — said that of the 571 who had been dismissed, 520 had belonged to the factory’s union, one of 20 that make up the Federation of Garment Workers Myanmar. About 700 workers who did not belong to the union kept their jobs, they said.

Myan Mode’s South Korean-based owner did not respond to requests for comment, and did not provide details about the firings.

Mr. Moe, 27, was the factory union’s president and had organized several strikes. Mr. Yint, 30, was the union’s secretary, while Ms. Myint, 34, had been a union member since its founding in June 2018.

“The bosses used Covid as an opportunity to get rid of us because they hated our union,” Mr. Moe said. He said he and other union members had been in discussions with the factory managers before the firings, demanding personal protective equipment and that workers be farther apart on the factory floor. “They thought we caused them constant headaches by fighting for our rights and those of our fellow workers.”

Union-busting — practices undertaken to prevent or disrupt the formation of trade unions or attempts to expand membership — has been serious problem across the fashion supply chain for decades. But with the global spread of Covid-19 placing fresh pressures on the industry, it is a particular issue in South Asia, where about 40 million garment workers have long grappled with poor working conditions and wages.

“Union-busting is not a Covid-specific issue for the garment industry — it happens all the time,” said Luke Smitham of the sustainability consultancy Kumi Consulting.

Zara’s parent company, Inditex, which is supplied by Myan Mode, said its code of conduct for manufacturers expressly prohibited any discrimination against worker representatives. The company said in an email that it was “actively following the situation” at Myan Mode, and would “try to achieve the best possible solution for workers.”

Mango, which has started to reopen its stores in Europe, said in an emailed statement that it “understood the need to ensure that the human rights of factory workers are respected.” The company added that it was maintaining “a continuous” dialogue with suppliers.

Roughly 2 percent of garment workers in Myanmar, where the minimum wage is roughly $3.50 a day, and 0.5 percent of garment workers in Bangladesh belong to a union, according to affiliate data estimates collected by the global trade union IndustriALL. While Cambodia’s work force is more unionized than others in the region — around 80 percent — the unions there are fragmented, meaning successful collective bargaining negotiations can be difficult.

Tear gas, water cannons, police brutality and imprisonment were some of the tools used by the governments of Bangladesh, Cambodia, India and Myanmar to punish striking garment workers and union members last year, according to the International Trade Union Confederation, an umbrella group for unions around the world. It noted that many workers in those countries who tried to form a union were dismissed from jobs or blacklisted by factories. And the number of countries that exclude workers from the right to establish or join a trade union increased to 107 in 2019 from 92 in 2018.

Andrew Tillett-Saks, a labor organizer in Yangon, said he had seen a surge in unionizing by garment workers in Myanmar over the last 18 months — and a reaction from factory owners. Before the pandemic, he said, some garment factories with fledgling unions were abruptly closing and firing union members, then reopening weeks later to supply the same brands under a slightly different name with a new group of nonunionized workers.

Mr. Tillett-Saks said that much of the focus had been on whether brands would pay wages for workers during the pandemic, or for orders that had already been produced. But factory owners “taking this as an opportunity to break down labor movements in the supply chain could be an even bigger issue.”

Some brands, like H&M, have tried to facilitate union activity in supplier factories by signing ACT, an agreement brokered by IndustriALL and designed to secure fair wages for workers through collective bargaining and building guarantees of labor rights into purchasing agreements. But there are still hurdles. Before the International Labor Organization, a U.N. agency, can take action, allegations of mistreatment must be sent in writing from a national or international trade union organization and then reviewed internally by the agency — a complicated process even before the pandemic.

“We have heard allegations of anti-union discrimination in recent weeks,” said John Ritchotte, a specialist in social dialogue and labor administration in Asia for the International Labor Organization. “However, it is currently more difficult than usual for us to verify those allegations through our usual procedures because of travel restrictions and local lockdowns.”

In the weeks since the Myan Mode layoffs, around 15,000 jobs in the textile industry have been lost and about 40 factories closed across Asia, said Khaing Zar Aung, president of Industrial Workers Federation of Myanmar.

Mr. Moe said the fired Myan Mode workers had protested outside the factory for weeks, watching as daily wage workers entered and scores of exhausted former colleagues left at midnight after overtime shifts. Eventually, management offered severance but not re-employment to the 571 fired workers, plus 49 employees who had walked out in solidarity. All but 79 eventually took the severance pay.

The Garment Manufacturers Association in Cambodia said about 60 percent of its factories — where union members have also been targeted — had been severely affected by canceled orders of ready-made garment exports because of the pandemic.

On March 31, several dozen union workers at the Superl leatherwear factory on the outskirts of Phnom Penh — which produces handbags for brands like Michael Kors, Tory Burch and Kate Spade — were told they were being let go. One was a woman who was six months pregnant.

Soy Sros, a factory shop steward and the local president of the Collective Union of Movement of Workers, wrote about the company’s actions on Facebook, stating it violated a March 6 appeal from the Cambodian government saying Covid should not be used as a chance to discriminate against union members.

Twenty-four hours later, Ms. Sros was forced by factory management to take down her post and make a thumbprint on a warning letter accusing her of defamation. On April 2, she was removed from the factory floor by the police and charged with posting fake information on social media. She is now in jail.

Superl, which is based in Hong Kong, did not respond to requests for comment, nor did Michael Kors and Tory Burch, which regularly place orders at the factory. Another customer, Tapestry, the owner of Kate Spade, declined to comment.

In Myanmar, Mr. Moe, Mr. Yint and Ms. Myint all said they did not regret joining the union despite the difficulties they had faced. They said the loss of jobs was proof that worker representation was needed.

“I worry for the future of garment workers here without representatives,” Ms. Myint said, referring to both the firings at Myan Mode and other factories across Asia. “But for now, I worry about providing for my family and getting food on the table.”