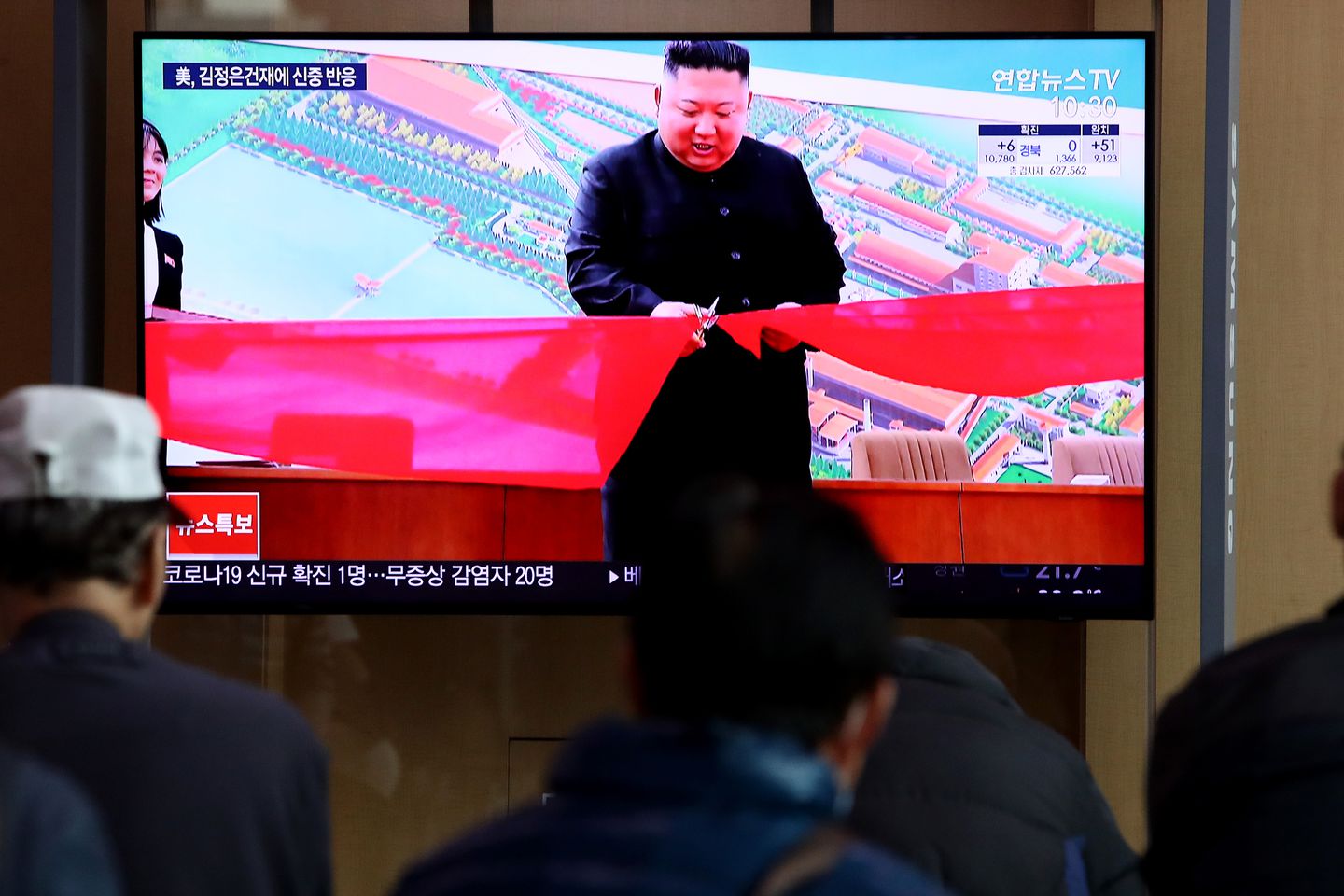 Speculation about Kim’s health circled after he failed to attend a ceremony to mark his grandfather’s birthday on April 15, and did not appear in public for around three weeks.

But officials in the United States and South Korea believe Kim retreated to a beach resort in Wonsan after becoming aware in mid-April that subordinates in his vicinity had suffered from a fever, according to two people familiar with the situation who spoke on the condition of anonymity to discuss intelligence reports.

There was certainly no sign of any health issues in the footage aired Saturday, barring the fact that the 36-year-old Kim is obviously overweight.

He was repeatedly seen strolling around the factory, as well as standing and chatting to aides in several scenes. He used a green buggy to tour the large factory complex with his aides, but that’s not an unusual occurrence, and on a couple of occasions he was seen sitting while being briefed on the factory and offering his usual “guidance.”

He was seen smiling and laughing on several occasions, as well as smoking.

His sister Kim Yo Jong, who had been virtually anointed as his successor by some eager observers, was reduced to the role of handing him a pair of scissors so he could cut a large ribbon to declare the factory open.

The official Rodong Sinmun newspaper devoted its first two pages to a report on Kim’s visit to the factory and “splendid” opening ceremony held on May Day, “the international holiday of the working people of the whole world.”

It noted that the appearance of the “beloved Supreme Leader comrade” was greeted with celebratory music and cheers. Video showed the masked crowded repeatedly cheering and waving North Korea flags and flower bouquets.

“All the participants again burst into thunderous cheers of ‘hurrah!’ for the Supreme Leader,” the paper added, as he commanded “the all-people general march for accomplishing the great cause of prosperity by dint of self-reliance,” and demonstrated “the might and dignity of socialist Korea.”

This wasn’t Kim’s first prolonged absence from the public eye this year. He lay low for three weeks between late January and February and wasn’t seen on state media for another 13 days between the middle and end of February.

The rumors about Kim’s ill health followed his failure to show up at the mausoleum for Kim Il Sung on April 15, a report on a South Korean website that he had undergone a cardiovascular operation and was recovering, and a CNN report suggesting he may have fallen gravely ill.

But South Korean officials insisted Kim was alive and still in charge of the country, and satellite images showed Kim’s personal train arrived at a railway platform reserved for his use in the coastal resort of Wonsan sometime between April 15 and April 21. His presence at Wonsan was also suggested by the fact that luxury boats owned by Kim were spotted outside his personal villa.

It now seems Kim may have merely been sheltering from the coronavirus.

Publicly, Pyongyang claims that no one in North Korea has contracted the virus, but the regime has repeatedly warned of the risks the pandemic posed to its country.

U.S. and South Korean intelligence officials say the North quarantined scores of its people near the Chinese border in response to the spreading virus.

U.S. and South Korean officials were also skeptical that the leader had died, after signals intelligence indicated that no unusual uptick in communication had occurred in Pyongyang, said people familiar with the situation.

Kim had also visited the fertilizer factory, which lies some 30 miles north of Pyongyang, in January when it was still under construction.

That had been his first economic site visit of the year, underlining the importance of food security and reducing dependence on Chinese fertilizer imports, said Lim Eul-Chul, an expert on the North Korean economy at South Korea’s Kyungnam University.

“It’s a message to China … as well as to Western countries imposing trade sanctions,” Lim said. “This is important news to come in springtime, when old stocks of autumn harvest dwindle.”

The fact that no hint of Friday’s huge ceremony had leaked out until now underlines how tight information control is in North Korea, observers said.

Noting Kim’s appearance, South Korea’s Unification Ministry criticized the reporting that had unleashed a torrent of rumors and speculation.

“In this occasion, the baseless reports on North Korea caused unnecessary economic, security and social costs and confusion in our society,” it said in a statement. “North Korea-related information requires a prudent approach based on concrete evidence in the future as well.”