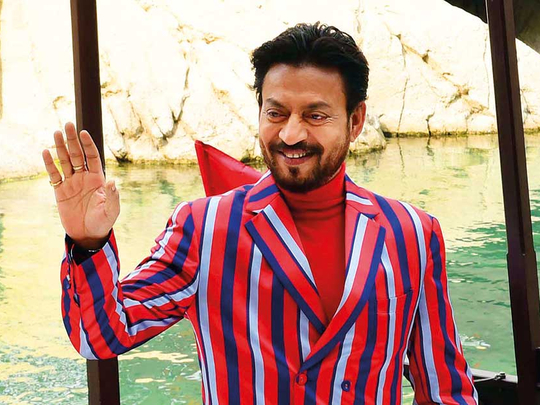 A journalist can never forget his or her first big interview that created a furore in her career and its subject.

For me, that reckoning came in the form of Irrfan Khan, who died on the morning of April 29 after a colon infection in Mumbai. My momentous interview with Khan was done over the phone in June 2009.

We were discussing his colleague and actor Shiney Ahuja who had been accused of rape by his domestic help. Speaking about the issue of sexual violence against women, Khan told me that rape was prevalent in Indian marriages and that “90 per cent of Indian married women face rape at some point in their married lives”.

Let’s admit that Khan was rattling off statistics without any foundation and that it was a hyperbolic statement that he couldn’t really prove.

Gulf News readers and activists in India called him out swiftly for his statements in my interview. I called him up again for a follow-up story on whether he would like to clarify and change his statements, considering the controversy he had trigggered. But Khan was never the one to back down.

Khan, 53, the Indian National Award-winning actor, was branded as ‘irresponsible’ and many said he was tainting the country’s reputation on the global stage. But Khan remained undeterred and stood by his statement, claiming that he was no statistician, but he knew that marital rape in arranged marriages in India was indeed prevalent.

He was unapologetic and unlike many Bollywood stars with pesky public relations officers who would try to arm-twist journalists into changing an actor’s words, Khan functioned like a one-man army. Back then, he attended his own phone calls and responded to messages personally. He never believed in having an army of handlers around him.

Simply put, they don’t make them like him anymore!

We met several times in person after that controversial phone interview. He was always polite — calling me ‘Manjuji’, walking up to you on the red carpet at the Dubai International Film Festival, to give us a few individual snippets for our video, and he was always unassuming about his acting skills.

He wore his confidence smoothly and never threw tantrums like some Bollywood stars I know. He was never tardy either and always turned up on time for interviews and spoke with such grace. He was also patient with all our questions and he didn’t believe in self-censorship. He was not the kind of star who expected us to send him questions before hand so that he could orchestrate a sanitised interview.

Khan may have acted in over 100 films, but what truly impressed me about Khan was that he was fluid as an actor. Long before Priyanka Chopra dazzled Bollywood with her charm and wit, there was Khan who was ploughing his way into Hollywood. He could straddle the glittering world of Bollywood films with as much agility as playing a scientist in fantasy adventure like The Amazing Spiderman.

He was also a part of grammar-altering films such as Danny Boyle’s Slumdog Millionaire and Ang Lee’s Life of Pi. He also had very few enemies. In the highly clannish Bollywood, Khan also stood alone and seemed to get along with every big, high-profile star.

He marched to his own tune and his career catalogue is a testament to his unconventional film choices that often went against the grain. In every interview, Khan — who was honoured with the fourth-highest Indian civilian honour Padma Shri — spoke about his love for acting and his craft.

Khan may have acted in more than 100 films, but what truly impressed me about him was that he belonged to a distinct school of actors — actors who dared to have unconventional opinions and who didn’t shirk from going against the grain.

When I met him during a press junket for his film The Song Of Scorpion in Dubai 2017, he was very keen to know if I liked his troubled folk romance in which he played a camel trader who does unthinkable deeds to win over his lover. He seemed genuinely interested in people and that’s a rare trait among Indian actors. He also pushed our buttons at times.

During our interactions, he would often take playful jibes at what we wore or what we were watching at film festivals. If you didn’t watch his film playing at the festival, he ribbed you endlessly about it.

Calling my skin ‘dark chocolate’ in front of a few other entertainment journalists would have been problematic in this current, highly sensitive #MeToo era, but he said it playfully without malice, creepiness or making me feel uncomfortable. He was just a keen observer who loved talking about films and people around him.

He was keen to know about the journalists who interviewed him as well. From finding out about the native town one was born in, in India, to where one could get the best Arabic food in the UAE, Khan always had questions.

He remains India’s biggest cultural export and film festival favourite. But his global fame and success never made him an arrogant man.

Just like his unruly, unkempt hair that he rarely brushed, Khan had a playful, impish charm about him. He only got serious when talking about his films, but he never made it seem like a big deal.

Khan was not just a star, he was an emotion.