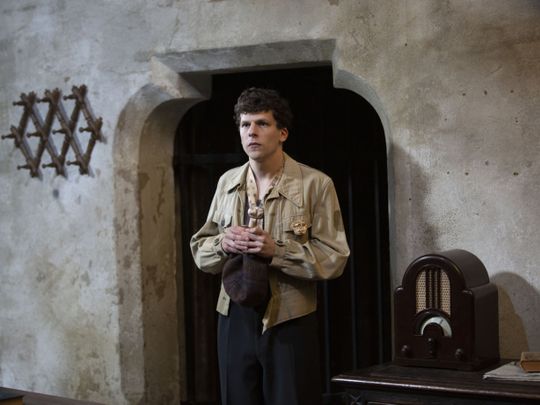 When Jesse Eisenberg replies to my email, he’s in a college town in the Midwest of America that has become somewhat of a ghost town. The coronavirus pandemic chased students away as distance learning became the new norm.

This has had some unexpected consequences: Eisenberg’s mother-in-law runs a domestic violence shelter that has lost several volunteers, due to students leaving town.

Eisenberg (best known as Mark Zuckerberg in the ‘Social Network’ and Lex Luther in ‘Batman v Superman’) started his own social distancing in an RV with his wife and toddler son, driving cross-country from California (where he was working) to Indiana (where he lives, and where his mother-in-law could use the extra hands).

Another consequence of the pandemic: cinema closures. Eisenberg’s latest film, ‘Resistance’, switched from a scheduled theatrical release to a digital launch on April 13, across several video-on-demand platforms.

Over email, we discuss the new biographical drama. He plays Marcel Marceau, a real life, world-famous mime — and Jewish actor — who had once-upon-a-time joined the French Resistance to save thousands of orphaned children from Nazis.

36-year-old Eisenberg spoke about why his mother being a clown drew him to the role, how he’s been coping with self-isolation, and why his three-year-old son is his biggest priority.

Hi, Jesse! Hope you’re doing well. Where are you answering us from?

Hi! I’m in Southern Indiana. In the amazing town of Bloomington. It’s a gorgeous college town (which is mostly empty now that the students have left).

Firstly, what attracted you to ‘Resistance’, and why did you want to be a part of it?

‘Resistance’ had about 10 things that appealed to me. Marceau and I have the same heritage in Southern Poland. My mother was a clown while I was growing up and she used to dress like Marceau and paint her face the same way! So, I was exposed to clowning and mime at a young age. But what I loved most of all was how the story so beautifully showed this young artist become an unlikely hero during [that] time.

With this being a real-life figure who lived an extraordinary life, what kind of preparations or research did you have to do for the role?

I did tons of preparation. I spent about six months working with an amazing mime teacher so I could learn Marceau’s routines. And for research, I learned so much about the resistance in France during World War Two.

What was the toughest part about nailing the role?

The toughest part about the role was probably the mime (because I was playing the world’s best mime!) But it was also a challenge to figure out how to play this character in a realistic way, even while he’s doing very heroic things. It’s important for him to seem like a real person — with flaws and hesitancy and even selfishness — instead of a purely heroic guy.

Can you tell us a little bit about how you trained to speak with a French accent?

I worked with a wonderful accent coach, Nadia Venesse, for several months on my accent. Luckily, it wasn’t too difficult because Marceau would have likely spoken Yiddish as well as French and his accent would be tinged with Yiddish. I grew up hearing Yiddish, so it was pretty familiar to me.

We’re living in some strange times right now, with most of us self-isolating. How has this been playing out in your life?

Well, I drove across the country from Los Angeles to Indiana in an RV with my wife and son. We were isolating as we were making our way home. It was surreal to see the country emptied out. Now we are in Bloomington and trying to help however we can, most specifically at my mother-in-law’s domestic violence shelter, Middle Way House.

Domestic violence is a cause that my wife and [I] work closely for and it is a really terrible time, as the rates are rising right now. [Editor’s note: Domestic abuse has risen around the world during this pandemic, according to data, as victims become stuck at home with their abusers; the United Nations called upon all governments to ‘put women’s safety first’.]

With most of us having to change our day-to-day, do you have a ‘self-isolation’ routine?

I do not have a routine except to try to maintain some kind of normalcy for my son. He’s three years old, so he’s too young to understand what’s happening but old enough to realise things are a bit different.

I wanted to touch on ‘Vivarium’, another new film of yours — what are your thoughts on Tom and Gemma’s story being a kind of unintended comment on self-isolation?

Yes, it’s certainly strange that it’s being released now. The movie was not intended to comment on isolation but is heavily about this subject. The couple are driven to madness because of the claustrophobia, so it’s certainly similar to how a lot of us are feeling.

Switching gears, a bit, can fans still expect to see you return as Lex Luther in ‘Justice League 2’?

I would love that, but it is not my decision to make! I absolutely loved playing that role and would do it a hundred times.

Last time we spoke, we discussed the possibility of a ‘Social Network’ sequel. Has there been any movement on that front?

Not that I’m aware of! I think it’d be a pretty tough movie to do a sequel of. They mainly just do sequels when there are flying characters involved. Or zombies.

WHO WAS MARCEL MARCEAU?

Born in 1923, Marcel Marceau was a French actor and mime artist, who performed professionally around the world for more than 60 years.

A long-time friend of Michael Jackson, Marceau’s techniques were actually used by the pop star in his dance routines.

In his youth, Marceau lived in hiding and helped the French Resistance during the Second World War. His first performance was in 1944, in front of 3,000 troops after the liberation of Paris.

After the war, he began to study dramatic art and mime in Paris, eventually establishing his own pantomime school in the capital city.

Marceau’s most famous stage persona was ‘Bip the Clown’. He won an Emmy award for his work on television.

‘Resistance’ is set to begin streaming on April 13 on iTunes, Google Play, beIN On Demand, OSN Store, as well as all local platforms including du, Etisalat E-Vision, Ooredoo, Vodafone and OmanTel.