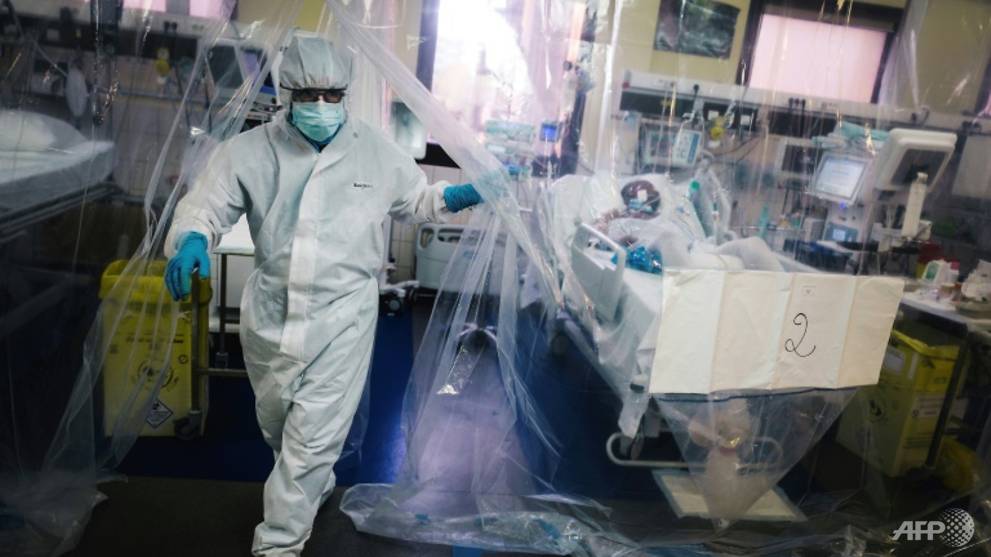 ROME: The global coronavirus death toll topped 100,000 on Friday (Apr 10) as Easter celebrations around the world kicked off in near-empty churches with billions of people stuck indoors to halt the pandemic’s deadly march.

The grim milestone came as the World Health Organization issued a dire warning that prematurely lifting lockdown restrictions – which have kept more than half the planet’s population in lockdown – could spark a dangerous resurgence of the disease.

The extraordinary measures from New York to Naples to New Delhi have seen businesses and schools closed in a desperate bid to halt the virus’s relentless spread and the IMF said the world now faces the worst downturn since the Great Depression of the 1930s.

More than 1.6 million people have been infected globally and the death toll hit 100,661 on Friday – with nearly 70 per cent of fatal cases in hard-hit Europe.

The United States, now the pandemic’s epicentre, clocked more than 1,700 new deaths on Thursday, a slight drop from Wednesday’s record toll of 1,973, with more than 500,000 infections, by far the most of any country.

Officials in the US and Europe nevertheless expressed some hope the curve could be starting to flatten.

US President Donald Trump said that with his country’s infection trajectory “near the peak”, and with social distancing working well, he was considering ways to open up the world’s biggest economy “as soon as possible”.

“Without question it’s the biggest decision I’ve ever had to make,” Trump told a news conference.

He acknowledged the “risk” of increased death tolls if shuttered businesses reopen too soon.

“But you know what? Staying at home leads to death also,” he said, highlighting the massive economic cost to millions of Americans.

Weekend Easter celebrations that would normally see churches around the world packed with parishioners were replaced by an eerie emptiness Friday as lockdown orders kept millions from leaving their homes.

Even such hallowed traditions as the pope’s Easter message are being revamped – Pope Francis will live-stream from the seclusion of his private library.

“We have to respond to our confinement with all our creativity,” the pontiff said. “We can either get depressed and alienated … or we can get creative.”

“It was a sad feeling at first,” Catholic priest Frank Heidkamp told AFP, as hundreds of worshippers gathered in a parking lot.

“With this car service we’re trying to create a little bit of community.”

More than 4 billion people are confined to their homes as governments worldwide have imposed never-before-seen measures to halt the virus.

This week, China started to ease months-old lockdown orders in Wuhan, where the outbreak started in December.

Like Trump, governments in Europe are facing pressure to strike a balance between keeping their populations safe and battering economies already bruised by widespread shutdowns.

READ:  On an empty Via Dolorosa in Jerusalem before Easter, praying for the world’s sick

The WHO issued a stern warning on Friday about lifting lockdown measures.

“I know that some countries are already planning the transition out of stay-at-home restrictions,” WHO chief Tedros Adhanom Ghebreyesus said.

“Lifting restrictions too quickly could lead to a deadly resurgence. The way down can be as dangerous as the way up if not managed properly.”

Some countries, especially in Asia, worry about a possible second wave of infections imported from travellers as life creeps back to normal.

In the United States, where coronavirus deaths have topped 18,000, second only to Italy, Trump said he would be naming a new “opening our country task force” on Tuesday next week as he seeks a rapid return to economic stability.

But the government’s top infectious disease specialist, Anthony Fauci, said that despite signs of progress, “this is not the time … to be pulling back at all” on social distancing efforts.

In some countries, glimmers of hope may be emerging.

Spain, the third hardest-hit country, saw its lowest 24-hour toll in 17 days, after Prime Minister Pedro Sanchez said the “fire started by the pandemic is starting to come under control”.

France reported nearly 1,000 new deaths on Friday, but the number of patients in intensive care fell for the second straight day.

Italy’s toll neared 19,000 Friday, the highest in the world, but daily rises in new infections have slowed dramatically.

Still, the government said it would extend lockdown orders until May 3.

Britain’s toll climbed too, with 980 new deaths, and the government resisted calls to ease lockdown measures.

But spirits were lifted there Friday when virus-stricken Prime Minister Boris Johnson showed signs of recovery after a three-day stay in intensive care following his COVID-19 diagnosis in late March.

“The Prime Minister has been able to do short walks, between periods of rest, as part of the care he is receiving to aid his recovery,” a Downing Street spokesman said.

The fallout is shaking every corner of the financial world, and the IMF, which has US$1 trillion in lending capacity, said it was responding to calls from 90 countries for emergency financing.

EU finance ministers agreed on a €500-billion rescue package after late-night talks on Thursday, aiming to reduce the pain across the 27-nation bloc, especially in Italy and Spain.

The US Federal Reserve also threw a lifeline to Americans – about 17 million people there have already lost their jobs – and chairman Jerome Powell announced a US$2.3 trillion financing relief measure.

And major oil producers agreed to cut output after a dramatic slump in demand, exacerbated by a Saudi-Russia price war, sent prices crashing to a near two-decade low.

In much of the developing world, there are fears the worst is still to come.

War-torn Yemen, which has been experiencing one of the world’s most acute humanitarian crises, reported its first case.

Authorities in Brazil, which on Friday became the latest country to record 1,000 coronavirus deaths, confirmed the first fatalities in Rio de Janeiro’s slums, where overcrowding and poor sanitation have raised fears of a catastrophe.

There are similar fears in India, where hundreds of millions of poor people are becoming increasingly desperate.