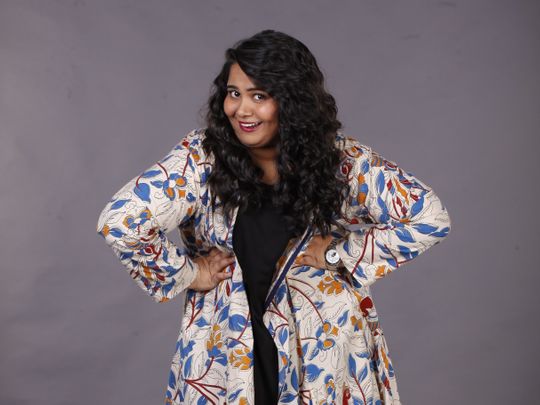 In the wicked, sharp and well-written series ‘Pushpavalli’, stand-up comedian Sumukhi Suresh treats us to an unorthodox and endearing central character.

At best, Pushpavalli can be described as an enterprising sociopath who clumsily stalks her dishy friend Nikhil (Manish Anand), steals his pet dog and tries to win over his affection stealthily. She even moves cities — Bhopal to Bengaluru — to make it all happen. But the smooth cad Nikhil doesn’t reciprocate her ungainly amorous advances, so she swears revenge and plots endlessly to bring him to his knees in the hit series, now streaming on Amazon Prime in the UAE.

“Everybody relates to her insecurity… Pushpavalli is such a [expletive] that she doesn’t realise that people can like her for what she is. She has no emotional maturity and no sense of self-worth,” said Suresh in an exclusive interview with Gulf News tabloid.

Suresh, who also co-wrote and created the series directed by Debbie Rao, says these words like an exasperated mother who is chiding her headstrong child for its petulant waywardness.

There’s a pinch of Pushpavalli in every woman out there, believes the self-made star Suresh. She is 32 and became India’s comic darling — one good joke at a time.

“A lot of women reached out to me after the show because they found her so relatable… I empathise with Pushpavalli’s insecurities and at some point in my life I was her. With time, I have learnt to let go off those insecurities,” said Suresh.

While season one is relatively vanilla with the makers introducing us to a clutch of lovable and eccentric characters, the second season is relatively murkier and darker as Pushpavalli changes gears and becomes sinister and flawed in her crazy pursuit for love and approval from her dream-boat Nikhil.

Excerpts from our interview with Suresh as we discuss her hit series, her flawed and fabulous depiction of Pushpavalli, her sinister antics and more…

You play an enterprising sociopath in ‘Pushpavalli’. How did the series come about?

What a great way to describe her. Before ‘Pushpavalli’, I did a web show called ‘Better Life Foundation’, a mock documentary web series on YouTube, with director of Pushpavalli, Debbie Rao, and Naveen [Richard who plays the potty-mouthed children’s library owner Pankaj], who had written it. Both Naveen and I have been working together a while by then because we have been doing comedy sketches together. We had many conversations about web shows and we spoke about how we want to write a series about girls in a city and how this girl stalks a boy. Just like Pushpavalli, I worked at a library, studied food science and these are environments that you don’t see in Indian web shows usually.

Indians have seen way more life. If ‘Breaking Bad’ [the hit series about a chemistry teacher making meth for money] was available in tier-two or tie-three Indian cities and they will be like: ‘yeh kya boriyat hai. Yeh toh hum ghar pe bana lete hai’ [This is so boring, we make that at home].

That’s our dynamic nature of our audience. So we took a risk and I am glad it paid off. About moving cities for a boy, I am sure some girl or the other has moved areas for a boy. The number of girls who related to Pushpavalli was staggering. You somehow think that we girls don’t pursue boys. The truth is that girls who pursue boys are perceived as nurturing. So even if Pushpavalli is a sociopath, she is a nurturing sociopath.

You are oddly right. It’s difficult to hate Pushapavalli’s guts…

Her emotional and sexual maturity is so low that you feel bad for her. Sometimes you feel she just needs to be slapped to her senses by her mother and she will be fine. In season two, many expected Pushpavalli to come to her senses and become this brand new person who realises that she was wrong.

[Expletive] that. The truth is that I am going to take a year to get over an ex, especially if you are in a downward spiral. For such personalities, it takes a long time for them to come out of it. Many asked why we didn’t show Pushpavalli in therapy during the second season. But for her to arrive at that decision to go to a therapist, it will take time.

The second season saw Pushavalli in a more emboldened, darker and empowered avatar. Was that switch deliberate?

Yes and no. I agree that Pushpavalli is more in charge in the second season, but she is also crippled by her emotional insecurities. Even though she wants to avenge the bad behaviour of Nikhil, she doesn’t have the emotional tools or heft to go through with her plan.

For a woman to avenge a man’s bad behaviour, she has to be sure about herself. You have to be very confident about the woman you are and your hold over the man. Although Pushapavalli is enterprising, deep down she is still excited when Nikhil looks at her or pays her attention. It’s his approval that she craves and wants.

Even though Vidyut, her fiance, is giving her the approval in a regular way, she doesn’t want that nor does she have the capacity to understand his love. Pushpavalli comes from a place where she thinks she needs to work hard for love. She feels deserving of affection and love, only if she works hard for it. She always wonders why anybody would love her? Perhaps, that’s why she can’t understand why her fiance would genuinely care for her.

What was the brief for Pushpavalli?

When we were setting up characters in season 1, we as writers as looking for relatability. But season 2 wasn’t about relatability and was more about Pushpavalli’s story. Her fiance, Vidyut is the only character who is so white in that universe. Everyone else is grey. Look at Nikhil, he’s a grey character too. He’s attractive, yet he is enjoying all that attention from Pushpavalli. We could have easily made him douchey.

In season 2, she wants revenge and is no longer that dramatic, innocent girl. As writers, we have always maintained that although the characters get they want they pay a price for their desires too.

I didn’t want to talk about body shaming through my character. I wanted others to talk about her size. That’s how body shaming works in real life. When I am alone I am ashamed of my body, but it’s the people who keep addressing it and they are the ones who make you aware that Pushpavalli is being fat shamed.

But her mom isn’t body shaming her, she’s just a single mom who is desperate to get her daughter married and Pushpavalli doesn’t fit that bill of a desirable girl in the marriage market. She fears that people are going to think she wasn’t a good mother. But that’s not the case with Vidyut’s aunt who talks about how fat I am. She is body shaming me directly. She is flippant and scathing about it.

What was your biggest challenge?

When I saw season one of ‘Pushpavalli’, I thought my acting was disjointed. I didn’t do too bad, but there wasn’t a continuity from one scene to the other. In season 2, I was more careful about the emotional continuity. If I am sad, I allow myself to be less sad before moving onto a joke or a witty scene. The transitions were smoother.

Don’t you think Pushpavalli needs a shrink more than a hunk in her life?

I agree. I didn’t want to call it out, but I wanted you to feel it. Pushpavalli is an obsessive woman and there are times when you feel like telling her to get her [expletive] together. But you are not in a classroom and I don’t want to tell you what to think. I just want to tell you a story. Remember that girls who are unhinged may not have the self-awareness to go to a shrink. You have to wait for my character to arrive at that decision.

Seasons one and two of ‘Pushpavalli’ are available to stream on Amazon Prime Video in the UAE.