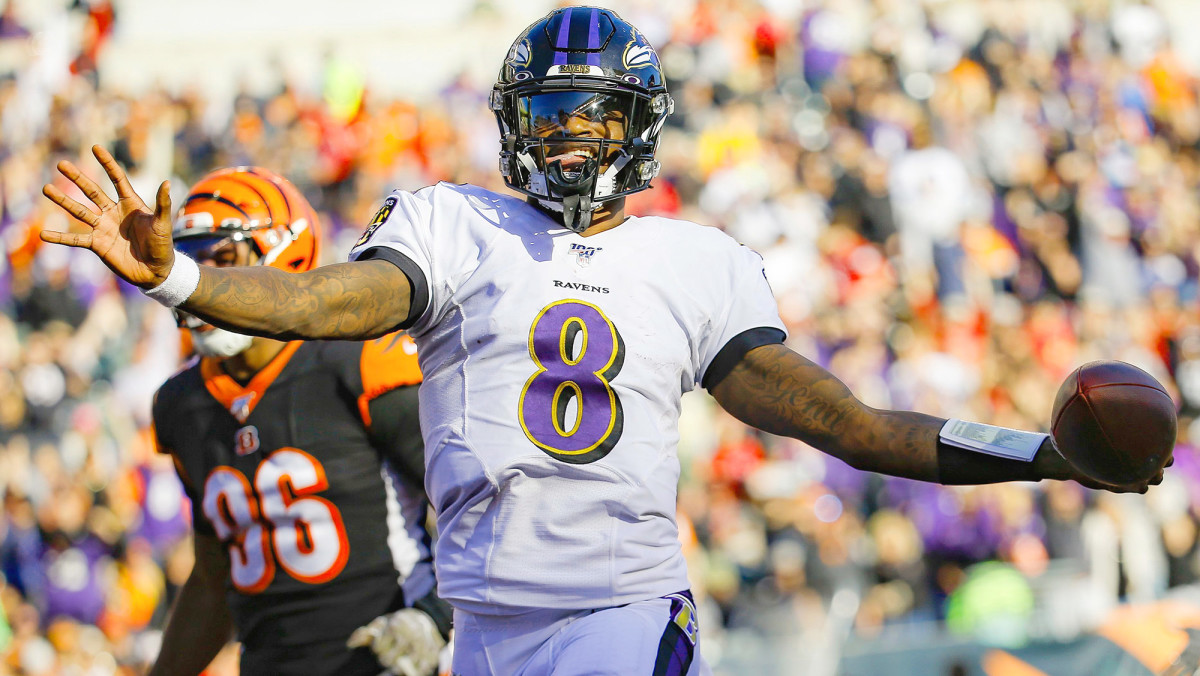 There is a well-known (but unwritten) rule that high-stakes fantasy football players never take their quarterback early. In fact, I have seen many drafts that end up looking like a game of chicken where 12 teams try to wait to the last possible round to draft their starter.

In a recent fantasy mock draft posted here at SI Fantasy, Jackson didn’t make the cut in the first round. That’s understandable.

However, 2019 saw the emergence of a fantasy phenom–Lamar Jackson, the quarterback of the Baltimore Ravens. This begs the question: Is 2019 NFL MVP Lamar Jackson worthy of being selected in the first round of 2020 fantasy drafts?

2020: Assuming Jackson has 20% fewer carries, he still would have close to 1,000 yards rushing. And, assuming he throws more, I will give him closer to 3,500 yards passing, which is better than last year’s 3,127. If he can keep his interceptions to a minimum (he only threw six in 2019), his overall point total should be very close to 2019’s number.

If this is true, then why are fantasy owners loathe to draft him in round one? Using the same ESPN scoring system, Josh Allen scored 290.06 points last year, ranking him as the seventh overall quarterback. Divided by 13 games, that would make Jackson about 11 points more valuable per week. Moreover, in a total points league, only two players scored over 400 points on the season—McCaffrey and Jackson. These two players were the best at their positions, and if a league awards a playoff spot based on total overall fantasy points scored, then owning one of these two players would certainly give fantasy owners a leg up against their competition.

The last argument that I can think of when it comes to why teams would not want to draft Jackson is that some owners feel by taking a quarterback early, there will end up being a huge drop-off at another position, specifically at running back. I would counter by saying that Jackson provides teams with RB1 numbers as well as the passing yards.

Typically, I play in 15-20 fantasy football leagues each season. This upcoming season I don’t anticipate taking Jackson in the first round of every league, but I do hope to get him in at least 25% of my leagues. If that happens, I feel very confident about making my league’s playoffs and winning a few fantasy football championships.