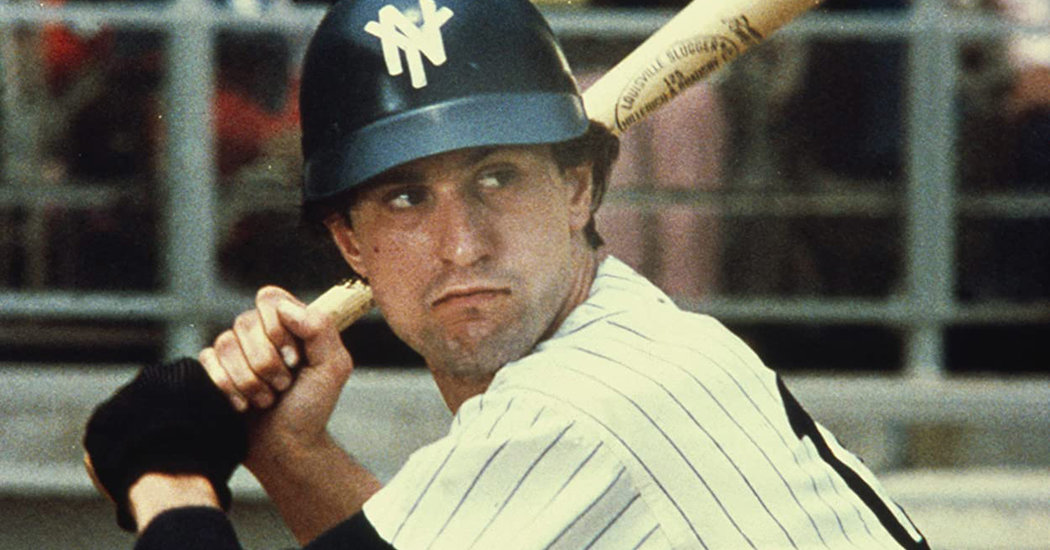 Opening Day has come and gone, and there’s no sign when Major League Baseball will return with new games. But fans needn’t despair. You could watch all 18½ hours of the director Ken Burns’s definitive 1994 documentary “Baseball,” streaming for free on the PBS website (and the four-hour 2010 sequel, “The Tenth Inning,” on Amazon Prime). Or you can catch a Murderers’ Row of great baseball features readily accessible online. Here, in alphabetical order, are my picks for the 10 best of the last 50 years.

Ignore the inferior sequels and the remake — and the politically incorrect insults of mini-bully Tanner Boyle (Chris Barnes): The director Michael Ritchie’s satire of America’s win-at-all-costs mentality is the ultimate Little League movie. (Sorry, devotees of “The Sandlot.”) The role of the booze-guzzling coach Morris Buttermaker fits Walter Matthau like an old mitt, and music from Georges Bizet’s “Carmen” provides a classy counterpoint to the profane antics of the hurler Amanda Whurlitzer (Tatum O’Neal), the thuggish slugger Kelly Leak (Jackie Earle Haley) and the rest of the lovable misfits.

Available to rent or buy on Amazon, Fandango Now, iTunes, Vudu and YouTube.

“Raging Bull” isn’t the only classic sports movie Robert De Niro has made. In baseball’s answer to “Brian’s Song,” he chews tobacco, if not the scenery, as a terminally ill catcher who stays on the roster thanks to the undying friendship of an ace pitcher (Michael Moriarty). Vincent Gardenia makes a credibly gruff manager, and while the fictional team is named the New York Mammoths, sharp-eyed viewers will recognize the locations as Shea Stadium and the old Yankee Stadium at their grittiest.

Available to rent or buy on Amazon, Fandango Now, iTunes, Vudu and YouTube.

Before they became fixtures of the “Star Wars” universe as Lando Calrissian and the voice of Darth Vader, Billy Dee Williams and James Earl Jones joined forces for this exuberant comedy about a barnstorming squad in the days of the Negro Leagues. But the real scene-stealer of this movie is an uproarious Richard Pryor as Charlie Snow, an outfielder who tries to break the color barrier by posing as a Cuban named Carlos Nevada, then a Native American named Chief Takahoma.

Available to rent or buy on Amazon, iTunes, Vudu and YouTube.

Any movie that starts with the line “I believe in the church of baseball” surely deserves the highest praise. It’s spoken by Annie Savoy (Susan Sarandon), a sexually sagacious English professor who comes between the veteran catcher Crash Davis (Kevin Costner) and the phenom pitcher Ebby Calvin LaLoosh, a.k.a. Nuke (Tim Robbins), in this witty romantic comedy. The writer-director Ron Shelton, a real-life former minor leaguer, brings verisimilitude to the script and reveals what’s really discussed during mound conferences — wedding presents for teammates.

Available to stream on IMDb TV, the Roku Channel, Tubi and Vudu; or to rent or buy on Amazon, FandangoNow, iTunes, Vudu and YouTube.

The scandal-plagued 2019 Houston Astros had nothing on the Chicago White Sox — or Black Sox, as they came to be called — of a century earlier. Though eight team members were acquitted on charges that they threw the 1919 World Series, they were banned for life from baseball. The writer-director John Sayles movingly depicts “Shoeless” Joe Jackson (D.B. Sweeney) and Buck Weaver (John Cusack) as unjustly accused and saves one of the best roles for himself. He forms a two-man Greek chorus with the historian Studs Terkel playing the sly sportswriters Ring Lardner and Hugh Fullerton.

Available to stream on the Roku Channel, Tubi and Vudu; and to rent or buy on Amazon, iTunes, Vudu and YouTube.

Major League Baseball plans to pay tribute to this gem by hosting a game between the Yankees and the White Sox on Aug. 13 in a temporary 8,000-seat park near the production’s original location in Iowa. In this enchanting film, a farmer (Kevin Costner) builds a diamond in his cornfield after hearing a disembodied voice telling him, “If you build it, he will come.” “He” turns out to be both Shoeless Joe Jackson (Ray Liotta) and the farmer’s long-estranged father (Dwier Brown), and “Field of Dreams” perfectly captures the magical thinking in which so many die-hard fans indulge.

Available to rent or buy on Amazon, iTunes, Vudu and YouTube.

‘A League of Their Own’

After his recent coronavirus diagnosis, Tom Hanks wrote, “Remember, despite all the current events, there is no crying in baseball.” That aphorism, delivered so indelibly by Hanks as the cantankerous manager Jimmy Dugan, is only one of many reasons the director Penny Marshall’s poignant comedy-drama about the All-American Girls Professional Baseball League endures. At the movie’s heart is the loving rivalry between the sisters Dottie Hinson (Geena Davis) and Kit Keller (Lori Petty), who find a new sense of self-worth on the diamond as male players are away fighting World War II.

Available to rent or buy on Amazon, FandangoNow, iTunes, Vudu and YouTube.

This raucous comedy about a ragtag Cleveland Indians club is generally considered the favorite baseball movie of Major League players. Maybe that’s because it’s populated by so many recognizable archetypes who are — to paraphrase the droll announcer Harry Doyle (Bob Uecker) — “just a bit outside” the bounds of normality. Among the most colorful are the vainglorious Roger Dorn (Corbin Bernsen), the superstitious Pedro Cerrano (Dennis Haysbert), the cocksure Willie Mays Hayes (Wesley Snipes) and the aptly nicknamed Ricky Wild Thing Vaughn (Charlie Sheen).

Available to stream on Fubo, or to rent or buy on Amazon, FandangoNow, iTunes, Vudu and YouTube.

Brad Pitt radiates move-star charisma as Billy Beane, the Oakland A’s executive who figured out how to compete against big-market teams despite having a fraction of their payroll in this thoroughly entertaining adaptation of Michael Lewis’s nonfiction best seller. As the soft-spoken numbers cruncher who converts Beane to the gospel of sabermetrics, Jonah Hill proved for the first time he’s a top-rank actor. And watch for an endearing turn by a pre-“Guardians of the Galaxy” Chris Pratt as a journeyman infielder.

Available to rent or buy on Amazon, FandangoNow, iTunes, Vudu and YouTube.

Available to stream on Netflix, as well as IMDb TV and Crackle, or to rent or buy on Amazon, FandangoNow, iTunes, Vudu and YouTube.