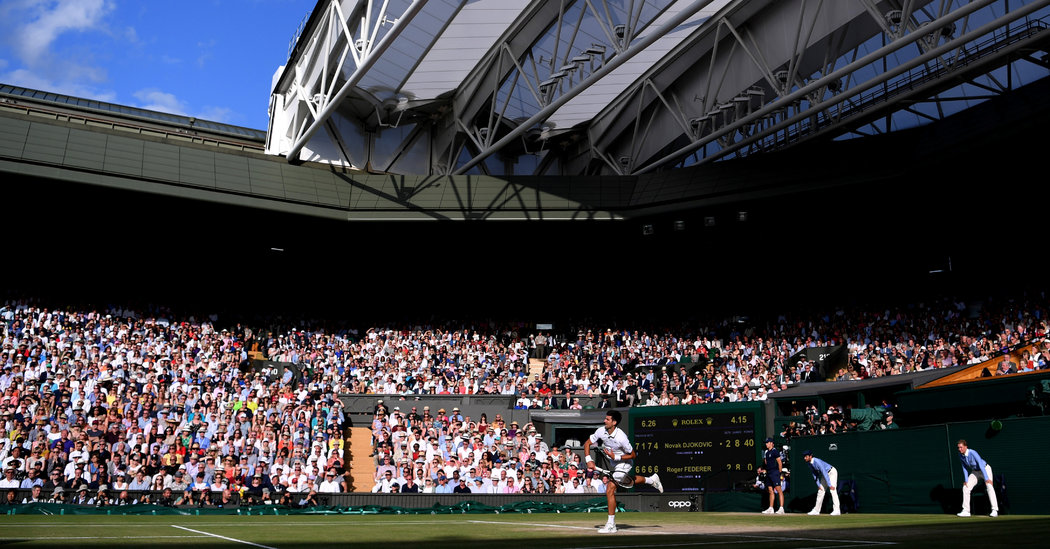 Wimbledon, the oldest Grand Slam tennis tournament and a cultural institution in Britain, will not be held in 2020, becoming the latest major sporting event disrupted by the coronavirus outbreak.

The cancellation, announced on Wednesday, was the first in 75 years for Wimbledon, which was founded in 1877 and had previously been called off only during World War I and World War II. But the pandemic caused the tournament’s leadership to cancel this year’s edition, which was scheduled from June 29 to July 12. The decision also led to the suspension of the preliminary grass-court season, halting all men’s and women’s tour event until July 13.

Britain remains under a lockdown that began last week, banning public gatherings of more than two people, permitting residents to leave their homes only to shop for necessities, to exercise and to travel to work.

“At present there are just no easy options; the way ahead is hard,” said Boris Johnson, the British prime minister, who tested positive for the novel coronavirus last week.

The tournament’s organizers said that the restrictions on large gatherings, travel and the strain on medical services made it impossible to prepare for the tournament properly without putting people at risk.

Postponing the tournament was ruled out, even as the government restrictions will be reviewed later this month. Organizers at the All England Club, which stages Wimbledon, felt they would be unable to properly prepare for the event at any point this summer, and they wanted to give certainty to players and others in the sport without making them wait.

“It is a measure of this global crisis that it is ultimately the right decision to cancel this year’s Championships, and instead concentrate on how we can use the breadth of Wimbledon’s resources to help those in our local communities and beyond,” said Ian Hewitt, the chairman of the All England Club.

The club’s leaders had already ruled out playing Wimbledon without spectators and were leery of a postponement because of the narrow scheduling window for grass-court tennis.

Wimbledon has always been played on grass, which was once tennis’s most common playing surface but has long since been superseded by clay and synthetic hardcourts. The tournament has maintained its prestige and relevance, however, and its cancellation is a major blow to professional tennis, stripping the sport of one of its biggest showcases and depriving players of a significant earning opportunity.

Total prize money at Wimbledon in 2019 was 38 million pounds (about $47.3 million at the current exchange rate).

“Wimbledon is the one event that transcends tennis in a lot of ways,” said Patrick McEnroe, the ESPN commentator and former leading professional who has tested positive for the coronavirus. “It’s because of the history and their ability over the years to adapt. It’s an anachronism, but they have found a way to really balance the tradition and the history of the game with being progressive, so you know they don’t take this type of decision lightly. It just tells you the magnitude of what we’re facing especially for them to do it this early: three months out.”

The organizers of the French Open, the clay-court event in Paris that usually precedes Wimbledon, have shifted their tournament to a Sept. 20 start date. But because of resistance from players and the leaders of the men’s and women’s tours, the organizers may be obliged to alter those plans.

The United States Open, normally the last Grand Slam played each year, remains scheduled for Aug. 24 to Sept. 13, but its leaders are also exploring the possibility of postponement. The United States Tennis Association said Wednesday that it was honing its plans and preparing for contingencies. Meanwhile, part of the Billie Jean King National Tennis Center is converting to an emergency 350-bed hospital.

But Wimbledon’s leadership chose to act quickly and decisively. Unlike nearly every other tennis tournament, it has cancellation insurance that will cover some of its losses during the pandemic. The All England Club also has considerable reserves.

According to the most recent figures available, from the fiscal year ending July 31, 2018, Wimbledon reportedly generated revenue of 256.7 million pounds and a pretax profit of 39.7 million pounds. Approximately 37 million of that was provided as funding to the Lawn Tennis Association, the governing body for the sport in Britain.

Wimbledon was last canceled from 1940 to ’45, during World War II. The decision not to play the tournament this year could have repercussions in the record books.

It eliminates the possibility that Djokovic, the world’s No. 1 men’s player, will complete a calendar Grand Slam this year by winning all four major tournaments.

It also means that Roger Federer and Serena Williams will not be able to play in the major tournament that best suits their games and their chances of winning at this late stage of their careers.

Federer and Williams will each turn 39 this year, and it is unclear whether they will still be playing when Wimbledon resumes in 2021.