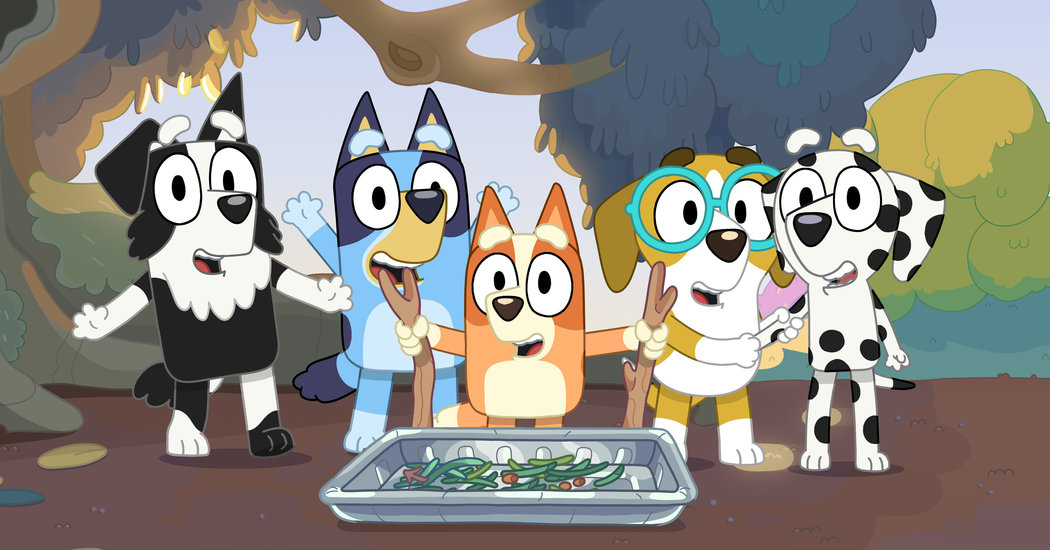 SYDNEY, Australia — Joe Brumm’s daughter was 3 when she was first admitted to a hospital with an asthma-like illness. She spent a week in intensive care.

“When she gets a cold, her lungs shut down,” said Brumm, the creator of “Bluey,” a wildly popular Australian children’s cartoon for 5- to 7-year-olds.

In “Bluey,” Brumm, 41, has turned moments from his own family life into a series of seven-minute episodes. These range from mundane squabbles, chores and playtime to more troubling situations, like his daughter’s hospital visit.

The difference is, onscreen, it’s a family of dogs.

In a country of just 25 million people, the show has been streamed over 200 million times, making it the most popular program ever on ABC iview, the Australian public broadcaster’s on-demand service.

And this week, “Bluey” won an International Emmy Kids Award for the best preschool program, with the winners announced online because of the coronavirus pandemic and the cancellation of the awards ceremony in Cannes.

“Bluey” started to go global last year. Disney purchased the rights for the series, and it premiered on Disney Junior in the United States in September, and is now on Disney+. Youku, a Chinese streaming service, is showing it dubbed into Mandarin.

“Bluey” speaks with a rare frankness and authenticity not only about the experience of being a child, but, also, being a parent. If it becomes as much of a hit abroad as at home, “Bluey” could rival “The Wiggles” as Australia’s most popular children’s cultural export.

The dog family lives in a suburban home in Brisbane with palm trees, colorful birds and endless sunny days — not to mention the city’s quintessential “Queenslander” houses, with corrugated iron roofs and shady verandas.

Jane Gould, Disney’s senior vice president of content strategy and insights, said that the Australian setting and the characters’ strong accents weren’t an issue for young viewers in the United States, but that they would have been in the past.

“Our kids live in a much more global community than the adults do,” Gould said, adding that, because of the internet, children nowadays have heard a broader variety of voices.

Daley Pearson, a co-founder of Ludo Studio, which produced the show, said “Bluey” was “a show for parents who hate kids’ shows.” He described it as a mixture of “Peppa Pig” and “Family Guy” — minus the latter’s vulgarity.

“I think kids can handle a lot of stuff more than film and TV writers give them credit for,” Pearson added. “They can handle heavy themes about compromise, cooperation or death, or jealousy.”

And whereas shows like “Peppa Pig” lampoon a bumbling father figure, “Bluey” celebrates the father, Bandit, as an equal, capable and fun parent, alongside his wife, Chilli. Bandit is always sympathetic to his children, dedicates time to playing games and contributes equally to the housework. Several Australian media outlets have described this portrayal as “groundbreaking.”

At a launch party for a “Bluey” range of soft toys and books in Sydney a few months ago, about 30 parents stood by as their children sat on the floor, rapt, while they were read a “Bluey” story.

James Brown, 39, who came to the event with his wife and two children, said: “I like the father. He is a really interesting role model for dads who are trying to do a bit more than the traditional model.”

“There’s not a lot of TV where that’s represented,” he added.

But Brumm said that he did not set out to redefine fathers.

“I was just trying to show what I did around the house and with the kids,” he said. “We still tease my father that he never changed a nappy,” he added, using the Australian word for a diaper. “The roles were probably more split back then. For my wife and myself, it’s all in.”

Brumm, who also worked on the British cartoon “Charlie and Lola,” said he based “Bluey” on a Blue Heeler dog of the same name he had growing up in Queensland.

Also known as an Australian cattle dog, Blue Heelers — a mix of native wild dingoes and domestic breeds — were bred to herd animals over long distances. They are celebrated in Australia for their loyalty and intelligence and the blue tinge of their coats.

“There are so many Australian shows that are cockatoos and koalas and kangaroos. I just found this really quintessential Australian dog,” Brumm said.

When Brumm had his own children, who are both under 10, he started jotting down the games they played, he said, and these “just morphed into these ‘Monty Python’ bizarre scenarios.”

Brumm said he soon realized he had never seen a depiction of unstructured children’s play — with all the strange, nonsensical turns it can take — in a kids’ TV show before.

It was equally important for him to show the charm and nostalgia of watching children grow up. One trademark of “Bluey” is the realistic dialogue and the constant dribble of random and amusing questions that young people ask about the world: “Where do rocks come from?” “Why are some plants food, like lettuce, but other plants not food?”

Sky Scott, 36, a physiotherapist who was at the recent toy launch, said she loved “Bluey” because it portrayed “the humor of parenting.” She even watches it with friends without her children, she added.

“There are so many things we can relate to as a parent” in the show, she said.

Teigan Butchers, 36, who came to the event with her 6-year-old, said that “Bluey” depicted “a lot of normalities of life: chores and bedtime and rules. When we were growing up, we had fairy tales, which are a little less realistic.”

Brumm said this sense of realism was what “Bluey” was all about. “There’s so much hard work with kids and there’s so much laughter that’s going on in and around the cracks,” he said. “I wanted to get to the core of what’s in the engine room of a family.”