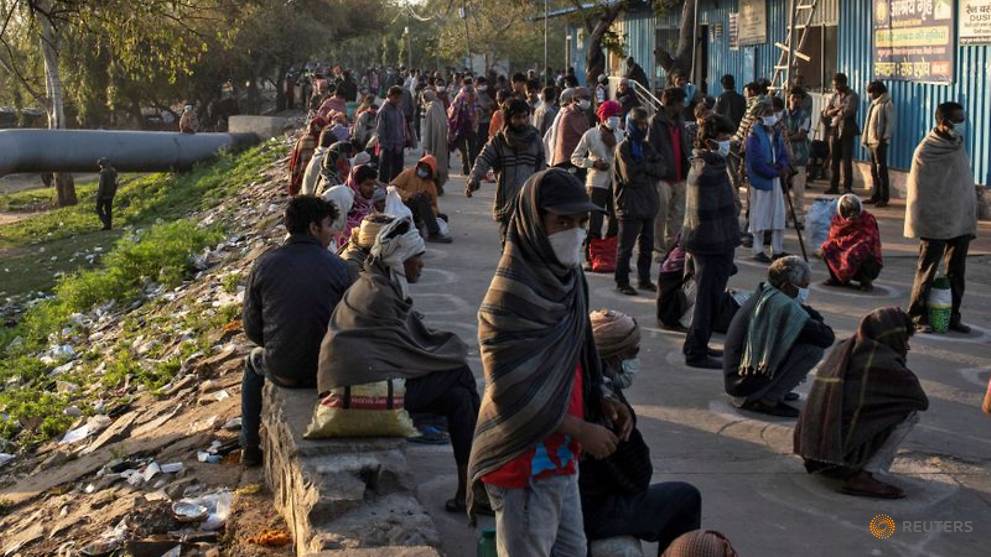 NEW DELHI: In a densely packed neighbourhood of Delhi, hundreds of homeless people queued up this week as volunteers doled out rice and peas from a vat in the back of a van.

Only a handful of the people in the crowd wore masks. There were no hand sanitizers or wash basins in sight and no social distancing.

“I need the food,” said a man in the queue, Shiv Kumar.

“If I stand apart, someone else might come in between.”

Volunteers say such scenes are playing out daily across India, as labourers and waste pickers – most of them homeless or too poor to afford a meal – are among the hardest hit by Prime Minister Narendra Modi’s three-week nationwide lockdown to stem the spread of coronavirus.

Most of the estimated 4 million plus homeless people in India have had no way of earning a living since the lockdown began on Mar 25. With streets deserted, even begging is not an option.

Many wander aimlessly, some find refuge at homeless shelters where ranks of people sleep beside each other.

While the plight of India’s migrant workers has garnered headlines, with thousands forced to walk miles to reach home since the lockdown began, many aid workers say the millions of homeless in India face a bigger risk.

READ: Commentary: How well has India been handling the COVID-19 pandemic?

Officials say the shutdown is necessary to stem the spread of the coronavirus. India has reported more than 1,500 cases and 38 deaths from the outbreak.

But rights groups have criticised the government over what they say has been inadequate planning ahead of the lockdown.

“You cannot impose such drastic measures on a population the size of India all of a sudden,” said Shivani Chaudhry, executive director of Housing and Land Rights Network, a non-profit group that works with the homeless.

“In shelters, we face serious challenges such as the lack of adequate space and sanitation,” she said. “If one person in a shelter gets infected, it’s going to be very hard to control its spread.”

While some cities like Delhi and Chennai have several homeless shelters, in other parts of the country, like Mumbai, many are stranded on the streets, rights groups say.

Some states are now scrambling to put the homeless in tents in parks, or at schools and other vacant spaces.

In the eastern city of Kolkata, a municipal councillor said government-run homeless shelters were all packed and there was no way of keeping people apart as a coronavirus precaution.

The Delhi government said in an order last week that social distancing must be “strictly followed” at the 200 odd night shelters across the city. But at least four shelters Reuters visited this week said they were struggling to follow the orders given the numbers of people seeking help.

“How do we do social distancing? If we separate them we will have to let many of them go,” said a manager at one shelter with a capacity of 500 people.

The federal Ministry of Urban Affairs only issued an order on Mar 28 – four days after the lockdown began – telling state governments there was “an urgent requirement” to support the homeless, according to a copy seen by Reuters.

While the government has outlined a US$22.6 billion stimulus plan that provides for direct cash transfers and food security measures for the poor, many activists say it is unclear how many homeless, many of whom lack documentation, would get any aid.

Doctors and health experts say the homeless are among the most at risk from the virus as many already suffer from illnesses such as tuberculosis, and their morbidity rates are higher than for the general population.

“How does one quarantine someone who has no home, or someone who lives cheek to jowl with 10 others in a small room?” said Dr Zarir Udwadia, an infectious diseases specialist in Mumbai, who has been treating coronavirus patients.

“Poverty and overcrowding like ours are likely catalysts for the COVID-19 explosion we anticipate with trepidation,” he said.

READ: Outrage in India as migrants sprayed with disinfectant to fight coronavirus

The spread of coronavirus among such a population would be terrifying, warned Indu Prakash Singh, a member of the Supreme Court’s urban poverty monitoring committee.

“In any pandemic these are first people to be hit,” he said calling efforts to tackle the issue “slipshod”.

Many of those on the streets view the coronavirus with a grim fatalism.

“Some of us will die, some of us will live to suffer,” said Zakir Hussain, a 45-year-old labourer, standing near a homeless shelter in Delhi.

“We are poor. We’ve been left here to die. Our lives are of no value to anyone.”