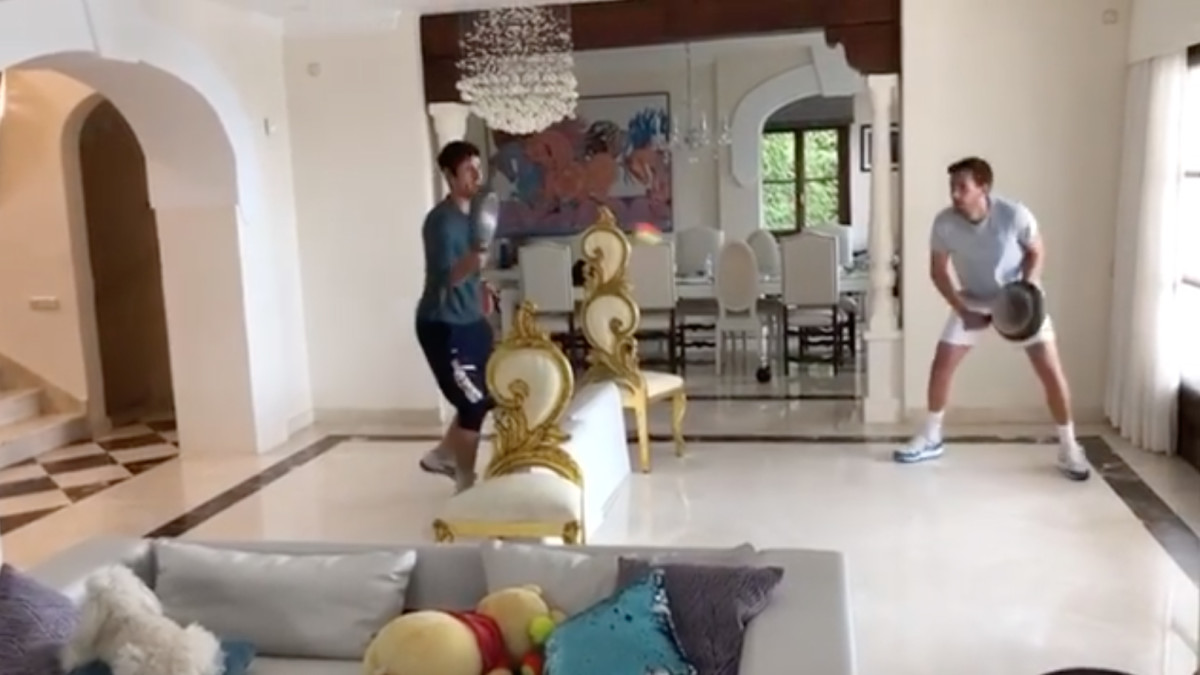 Athletes are fueled by a competitive drive no normal person could even imagine. They have a fundamental need to battle it out against another person to see who’s the best. So what happens when you have two pro tennis players locked in a house with at least two months before their next tournament? They have to get creative and find another way to compete.

Novak Djokovic is riding out the crisis with his family, including his brother Marko, who also plays pro tennis. The brothers set up a little tennis court in between the living room and dining room, using chairs and couch cushions, and used frying pans for rackets.

It’s the kind of thing two bored teenagers might do on a rainy day, but the Djokovic brothers had a pro-quality 20-shot rally.

What a good reminder of how amazing professional athletes are. If you tried that at home, you might be able to sustain a five-shot rally—maybe 10 shots. But Novak and Marko kept the ball alive for 20 shots, while casually mixing in behind-the-back and between-the-legs shots. I’d probably pay $10 for a live stream of their whole game.

The current baseball stoppage means we’re losing out on some of the best games of Mike Trout’s career. … Alabama is the new Linebacker U. … How the coronavirus will make things different for NFL teams during the draft. … College teams searching for new coaches are in a weird spot right now.

Nickelodeon will be airing an NFL playoff game with a broadcast specially geared toward younger viewers. … People who have beaten the coronavirus have antibodies that can be used to treat people, so Celtics guard Marcus Smart is donating his blood. … ESPN is going to air a tournament of NBA players, including Kevin Durant, playing 2K.

This is fun as hell

Does Trea Turner have a wiffle ball pitching machine?

Crazy to see the hockey boards still up

A Canadian man arrested for dealing cocaine was also charged with operating a non-essential business. … A movie theater near San Antonio converted itself into a drive-in… Christopher Meloni is reprising his role as SVU’s Eliot Stabler for a new Dick Wolf series on NBC.

Larry David has an important PSA