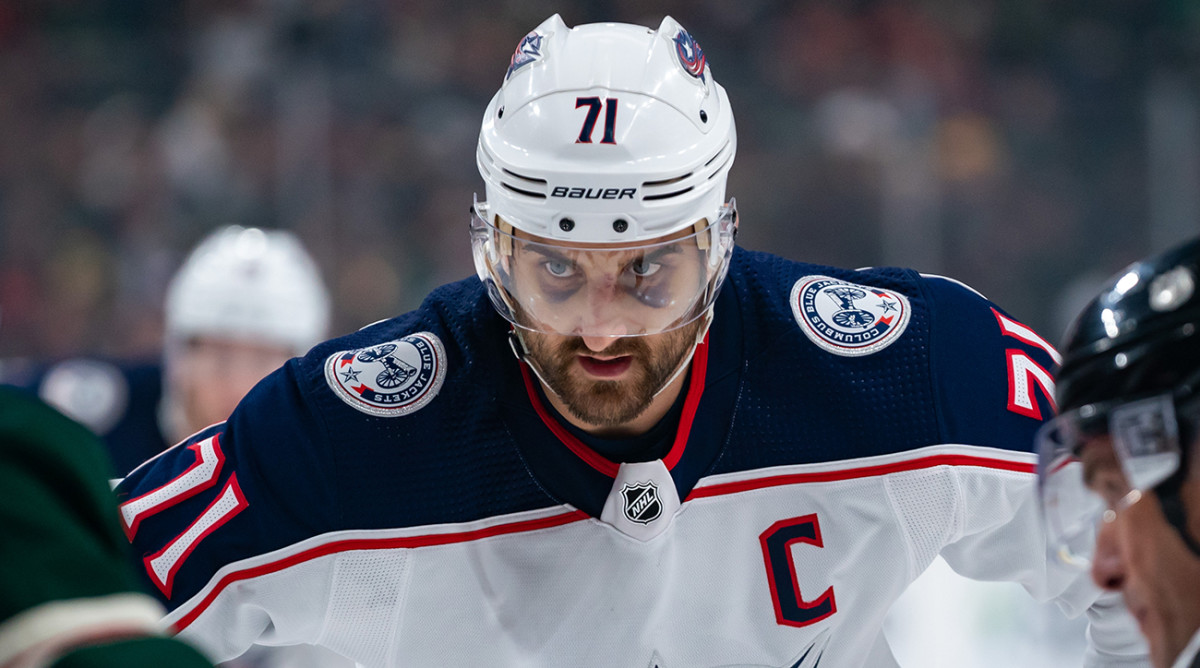 Setting aside the real-world horrors of COVID-19, the NHL shutdown was crushing for pretty much every team, but it might’ve felt like home for the Columbus Blue Jackets. Since July 1, 2019, no team has been kicked in the face over and over like they have. Pausing the season in the midst of a playoff chase was just one more kick.

The Jackets lots their three of their top stars, goaltender Sergei Bobrovsky, left winger Artemi Panarin and center Matt Duchene – to unrestricted free agency on deals with AAVs of $10 million, $11.64 million and $8 million, respectively. Columbus opened 2019-20 under significantly lowered expectations, determined to survive with a scrappy, stingy identity under coach John Tortorella. And then the injury assault began. There was the annual Ryan Murray injury, this one a broken hand on a blocked shot; the Josh Anderson shoulder surgery; the stress fracture in rookie Alexandre Texier’s back; star defenseman Seth Jones’ broken foot; center Alexander Wennberg’s upper-body injury; breakout right winger Oliver Bjorkstrand’s broken ankle; momentum-halting injuries to emerging goaltenders Joonas Korpisalo and Elvis Merzlikins; and a lower-body injury to right winger Cam Atkinson, who was slated to return March 12, just in time for the league to suspend play.

Through that endless infirmary parade, Columbus, not surprisingly, led the NHL in man games lost by cumulative minutes. So it was awfully impressive to see the Jackets soldiering on, clawing their way to the second Eastern Conference wild-card spot. Despite all the injuries, they were 15-8-7 from Jan. 1 onward, good for a .617 points percentage, seventh-best in the NHL. Territorially, they were typically outplayed, but Korpisalo and Merzlikins helped them post the fourth-best team save percentage at 5-on-5 over that span. The Blue Jackets weathered the storm with their roster reduced to a husk.

That’s a great source of pride for captain Nick Foligno, who reflected on the season last week during a video conference call on Zoom.

“It’s a story I’d obviously like to see finished just with the way our year’s gone,” Foligno said. I’m proud of the guys. It took a lot of humbling and character to come back. “

New York Islanders captain Anders Lee was on the call, too, and Foligno singled him out as someone who could understand what the Blue Jackets had endured. Last year, the Isles had lost captain John Tavares as a UFA and ended up improving.

“Anders can speak to it from last year losing a big player and what they did as a team,” Foligno said. “I think we used that as motivation throughout the year and just realized that it really comes down to a belief in the room. You’re going to have great players come and go. It’s just the way this business works. If you believe in what you have in that room and what you’re building as core chemistry in that room and the culture, than you can achieve things. We didn’t anticipate the injuries, but it just showed a certain mindset, guys coming in that got called up, and they just patch right in because they know what’s expected of them, they know what they’re there to do and they want to be a part of that.”

“So it was really neat to see how we just bonded with whoever came up. And we knew that we had to. The way we played, we weren’t going to outskill teams. We had to work as hard as possible in order to beat teams.”

Maybe karma will reward the Blue Jackets for gutting out such a rollercoaster of a year. Jones is their most important player, his rehab has progressed to the point he’s out of a cast and walking boot, and he could be healed in time for any reactivated regular season or even a direct jump to the playoffs. Same goes for Bjorkstrand, and Atkinson was already set to rejoin the lineup.

That has to be an exciting motivator for the rest of the Jackets who held the team in the race. If only they could channel that pump-up factor into the vigorous workouts for which Tortorella teams are famous. But, nope, they must figure out their fitness on their own at home. Foligno has been lucky enough to do Zoom workouts with a strength coach, but he feels for other players who are forced to kick it extra old-school when training right now.

“You’re going back to that Rocky mentality where you’re doing pushups and situps, punching the cow, the cadaver, all that,” he said.

You could make a case that the Jackets are better equipped than almost any other team to endure the boredom, the primitive workouts and isolation, because they’ve spent all season overcoming odds stacked against them. It’s thus not a huge surprise that Foligno, consistently one of the sport’s best talkers, has no problem seeing the big picture when placing his team’s plight in the context of a COVID-19 world.

“There’s nothing we’d love more than to be on the ice in front of (the fans), but this humanizes everything,” Foligno said. “It makes everyone realize we’re part of each and every community that we’re in.

“A lot of times in hopeless situations, you don’t really know what you can do. Well, there’s something we can do. It’s pretty simple. Wash your hands, be cognizant of our distance from each other, quarantine yourselves so it allows others to thrive, and eventually we’ll get out of this and get back to the fun of playing in front of you and having you at the rink and enjoying this. But my heart goes out to everyone that’s on the frontlines of this, the doctors and nurses and volunteers. Social media can sometimes be so negative, but the stories I’ve seen have been so uplifting.”

More from The Hockey News
The Best Late Pick in the 10 NHL Drafts From 2006 to 2015
Which Interim Coaches Will Stick Around Beyond This Season?
Why You Shouldn’t Sleep on the Predators Signing of Connor Ingram