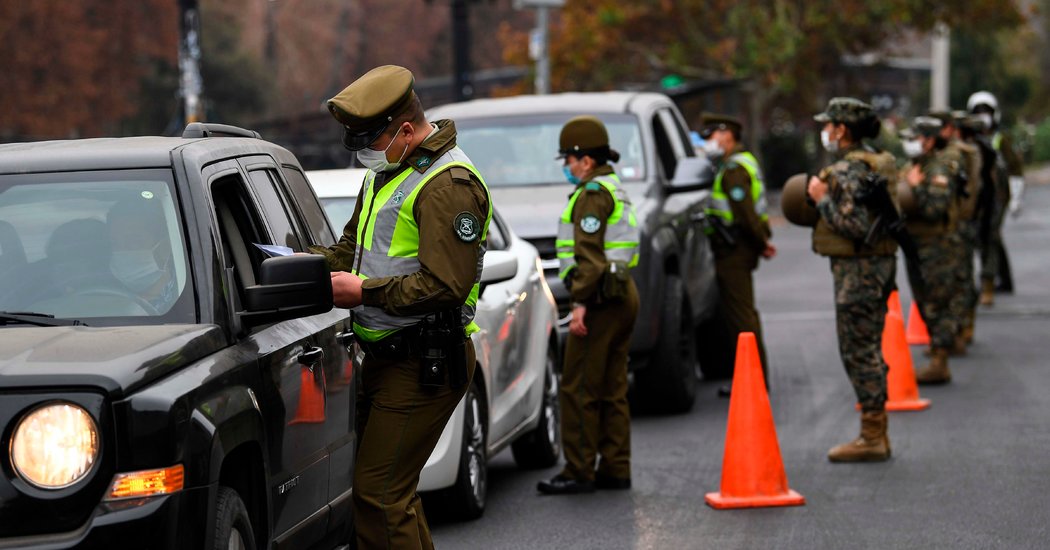 LONDON — In Hungary, the prime minister can now rule by decree. In Britain, ministers have what a critic called “eye-watering” power to detain people and close borders. Israel’s prime minister has shut down courts and begun an intrusive surveillance of citizens. Chile has sent the military to public squares once occupied by protesters. Bolivia has postponed elections.

As the coronavirus pandemic brings the world to a juddering halt and anxious citizens demand action, leaders across the globe are invoking executive powers and seizing virtually dictatorial authority with scant resistance.

Governments and rights groups agree that these extraordinary times call for extraordinary measures. States need new powers to shut their borders, enforce quarantines and track infected people. Many of these actions are protected under international rules, constitutional lawyers say.

But critics say that some governments are using the public health crisis as cover to seize new powers that have little to do with the outbreak and have few safeguards to ensure that the new powers will not be abused.

The laws are taking swift hold across a broad range of political systems — in authoritarian states like Jordan, faltering democracies like Hungary, and traditional democracies like Britain. And there are few sunset provisions to ensure that the powers will be rescinded once the threat passes.

“We could have a parallel epidemic of authoritarian and repressive measures following close if not on the heels of a health epidemic,” said Fionnuala Ni Aolain, the United Nations Special Rapporteur on counterterrorism and human rights.

As the new laws broaden state surveillance, allow governments to detain people indefinitely and infringe on freedoms of assembly and expression, they could also shape civic life, politics and economies for decades to come.

The pandemic is already redefining norms. Invasive surveillance systems in South Korea and Singapore, which would have invited censure under normal circumstances, have been praised for slowing infections. Governments that initially criticized China for putting millions of its citizens under lockdown have since followed suit.

Israel’s prime minister, Benjamin Netanyahu, has authorized his country’s internal security agency to track citizens using a secret trove of cellphone data developed for counterterrorism. By tracing people’s movements, the government can punish those who defy isolation orders with up to six months in prison. And by ordering the closing of the nation’s courts, Mr. Netanyahu delayed his scheduled appearance to face corruption charges.

In some parts of the world, new emergency laws have revived old fears of martial law. The Philippine Congress passed legislation last week that gave President Rodrigo Duterte emergency powers and $5.4 billion to deal with the pandemic. Lawmakers watered down an earlier draft law that would have allowed the president to take over private businesses.

“This limitless grant of emergency powers is tantamount to autocracy,” a Philippine rights group, the Concerned Lawyers for Civil Liberties, said in a statement. The lawyers noted that Mr. Duterte had once compared the country’s Constitution to a “scrap of toilet paper.”

Some states are using the pandemic to crack down on dissent. In Jordan, after an emergency “defense law” gave wide latitude to his office, Prime Minister Omar Razzaz said his government would “deal firmly” with anyone who spreads “rumors, fabrications and false news that sows panic.”

Prime Minister Prayuth Chan-ocha of Thailand has assumed the authority to impose curfews and censor the news media. Journalists there have been sued and intimidated for criticizing the government’s response to the outbreak.

While the virus itself may have cooled protesters’ will to crowd public squares, Chile’s declaration of a “state of catastrophe” and the military’s presence on city streets has muted raging dissent that rocked the nation for months.

The pandemic has also disrupted planned elections. This month, Bolivia suspended a much anticipated presidential election that had been scheduled for early May. A disputed election last year set off violent protests and forced President Evo Morales to resign.

The interim president, who promised to serve only as a caretaker, has since consolidated power and announced her plan to run for an elected term. The country’s election tribunal said on Thursday that it would hold the elections sometime between June and September.

In the United States, the Justice Department asked Congress for sweeping new powers, including a plan to eliminate legal protections for asylum seekers and detain people indefinitely without trial.

After these proposals were met by skepticism from both Republicans and Democrats, the department submitted a more modest proposal to let some federal inmates serve their time at home and redirect tests and protective equipment to federal prisons.

Right groups say governments may continue to absorb more power while their citizens are distracted. They worry that people may not recognize the rights they have ceded until it is too late to reclaim them.

Some emergency bills were waved through so quickly that lawmakers and rights groups had no time to to read them, let alone debate their necessity. Rights advocates have also questioned the speed with which states have drafted lengthy legislation.

Certain governments have a set of desired powers “ready to go” in case of emergency or crisis, said Ms. Aolain, the United Nations special rapporteur. They draft laws in advance and wait “for the opportunity of the crisis to be presented,” she said.

It is far from clear what will become of the emergency laws when the crisis passes. In the past, laws enacted in a rush, like the Patriot Act that followed the Sept. 11 attacks, have outlived the crises they were meant to address.

Over time, emergency decrees permeate legal structures and become normalized, said Douglas Rutzen, the president of the International Center for Not-for-Profit Law in Washington, which is tracking new legislation and decrees during the pandemic.

The pandemic may be a boon to governments with an autocratic bent.

In Hungary, a new law has granted Prime Minister Viktor Orban the power to sidestep Parliament and suspend existing laws. Mr. Orban, who declared a state of emergency this month, now has the sole power to end the emergency. Parliament, where two-thirds of the seats are controlled by his party, approved the legislation on Monday.

Critics say the new legislation could allow Mr. Orban’s government to further erode democratic institutions and persecute journalists and members of the opposition. The law will permanently amend two articles of the criminal code that will further limit freedom of expression and penalize people for breaching quarantine orders. It will also suspend all elections and referendums.

Under one measure, anyone who disseminates information that could hinder the government’s response to the epidemic could face up to five years in prison. The legislation gives broad latitude to the public prosecutor to determine what counts as distorted or false information.

“The draft law is alarming,” said Daniel Karsai, a lawyer in Budapest who said the new legislation had created “a big fear” among Hungarians that “the Orban administration will be a real dictatorship.”

“There is not enough trust in the government in this respect,” he said.

Others pointed to the government’s track record of prolonging emergency legislation long after a crisis. One such decree, issued at the height of Europe’s migration crisis five years ago, is still in effect.

Robust democracies are also using the pandemic to expand their power.

Britain has a long history of democracy and well-established democratic customs. Nevertheless, a coronavirus bill that was rushed through Parliament at a breakneck pace affords government ministries the power to detain and isolate people indefinitely, ban public gatherings including protests,and shut down ports and airports, all with little oversight.

Introducing the bill in Parliament, the health secretary, Matt Hancock, called it “a departure from the way that we do things in peacetime.” He said the measures would be “strictly temporary and proportionate to the threat that we face.”

But some of the provisions — called Henry VIII powers, after the notorious 16th-century monarch — will give the government unchecked control. The legislation gives sweeping powers to border agents and the police, which could lead to indefinite detention and reinforce “hostile environment” policies against immigrants, critics said.

“Each clause could have had months of debate, and instead it’s all being debated in a few days,” said Adam Wagner, a lawyer who advises a parliamentary committee on human rights.

“Everybody’s been trying just to read it, let alone properly critique it,” he said of the legislation, which runs to 340 pages.

“These are eye-watering powers that would have not been really imaginable in peacetime in this country before,” said Silkie Carlo, the director of Big Brother Watch, a rights group. She called the measures “draconian.”

Ms. Carlo fears that Britain will “swing from crisis to crisis, health panic to health panic, and then find that we’ve lost.”

“We risk easily finding ourselves in a perpetual state of emergency,” she said.