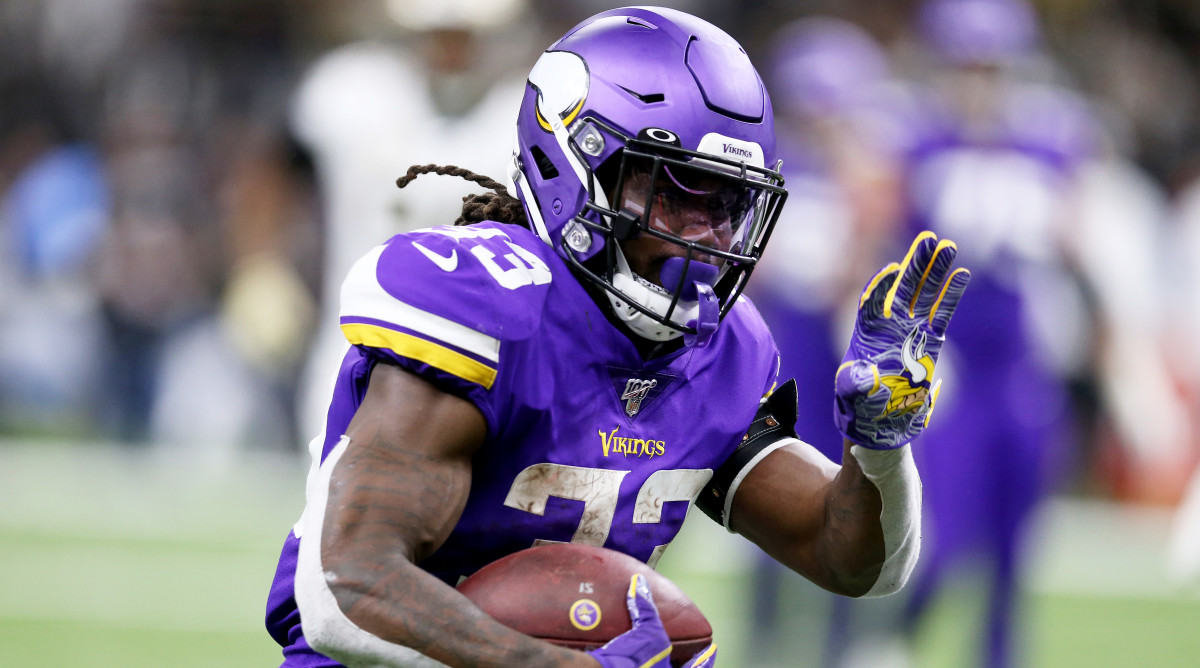 This is my first fantasy football mock draft for the upcoming season. I never thought I would have to do it at the end of March but this is the time we live in. I will update my one-man mock draft monthly for the rest of the offseason.

Last year during fantasy draft season, there was a lot of discussion about who should be the top pick in fantasy football drafts. This year there is no debate. McCaffrey is the clear consensus top pick in fantasy football. Matt Rhule and Joe Brady will put in a new offense in Carolina, but the signing of dinker and dunker Teddy Bridgwater lets you know that the offense will still run through CMC.

Cook was about as beastly a runner that one has ever seen last season. He ran for over 1,100 yards and scored 13 touchdowns. He also caught 53 balls for over 500 yards. Cook returns to the same offense that featured him last season. He will be a beast yet again in 2020.

For the most part, Zeke had a down year last season. A down season for Elliott included over 1,700 yards from scrimmage, 14 touchdowns, over 300 carries and over 50 receptions. I think anyone would sign up for that kind of down season. Naysayers will point to new Cowboys Head Coach Mike Mccarthy as a coach who forgets to run the ball at times. Quite simply, McCarthy has never had a running back like Elliott.

Barkley’s second season in the NFL had its ups and downs. He missed three games with an ankle injury but was still able to run for over 1,000 yards in 13 games. Barkley scored 15 touchdowns in his rookie season but only scored eight times in 2019. This season the Giants will implement new Offensive Coordinator Jason Garrett’s offense. Garrett’s offense is a hybrid of Norv Turner’s offense, which will likely mean more power runs and pass catches for Barkley. As long as the third-year back can stay healthy and get his touchdown numbers up, he will be fine.

Thomas was a bad man last season. He clearly has taken over as the top wide receiver in fantasy football. When Drew Brees went down early in the season, Thomas investors were worried about a drop off in production. That drop off never came as Thomas caught at least 10 passes in 12 games. That is Antonio Brown type production. Thomas had an NFL record 185 receptions last year to go along with over 1,700 receiving yards. I like to select running backs at the top of the draft but Thomas could go as high as the second overall pick this year. I would not have any problem with that.

Alvin Kamara has had exactly 81 receptions each season that he has been in the NFL. I’m not sure how that’s possible. In 2019 Kamara posted 1,330 yards from scrimmage which was a career-low. I think not having Drew Brees for five games was the reason for the drop off in production. The big issue Kamara had last season was the low touchdown totals. He only scored six times. I am betting on Kamara getting back to over double-digit touchdowns again in 2020.

I think Nick Chubb is getting ready to have a breakout fantasy season. Yes, I know Kareem Hunt will still be around but I consider Chubb to be a much better back. Last season the Browns had a poor offensive scheme and a bad offensive line. This year under the guidance of Kevin Stefanski, Chubb should really blossom into one of the best backs in the league. Chubb is not a big-time pass catcher but he is a big-time runner who put up close to 1,500 rushing yards last season.

Texans Head Coach Bill O’Brien made the mistake of trading DeAndre Hopkins a couple of weeks ago. Hopkins is a generational talent who can excel at his position even if he has poor quarterback play. This is not to say that Kyler Murray is a bad quarterback but he is no DeShaun Watson. Murray is savvy enough to know to get the ball into the hands of Nuke Hopkins. Hopkins has had over 100 receptions in each of his last two seasons. There is no reason why that number should go down in Arizona.

Adams has one of the best jobs in football, catching passes from the great Aaron Rodgers. Adams has excelled in that role. In 12 games played last season, Adams caught 87 balls for just under 1,000 yards. If he gets to play a full healthy season, Adams should go back to his 2018 numbers making him one of the top three receivers in fantasy football.

Hill only played in 12 games last season so there was obviously a dip in his numbers. There may be plenty of wideouts who get more targets and receptions than Hill, but Hill’s big-play ability is very tempting to me. Hill has scored 32 touchdowns in his career. He will produce double-digit scores this upcoming season with Patrick Mahomes under center.

Big Mike Evans is in a big spot going into the 2020 season. He will get to catch passes from the GOAT, Tom Brady. Evans is a great fit in Bruce Arians’ system. Last year Evans finished as the third-best wide receiver in fantasy football, while his teammate Chris Godwin finished one spot ahead of him. No reason why they shouldn’t be able to put up huge numbers again this year.

If Mike Evans is a first-round draft pick this season, there is no reason why Chris Godwin can’t be one as well. As I mentioned, the offense works perfectly with both Evans and Godwin. Last season was Godwin’s breakout campaign in which he caught 86 balls for 1,333 yards and nine touchdowns. He did that in 14 games played with 121 targets.