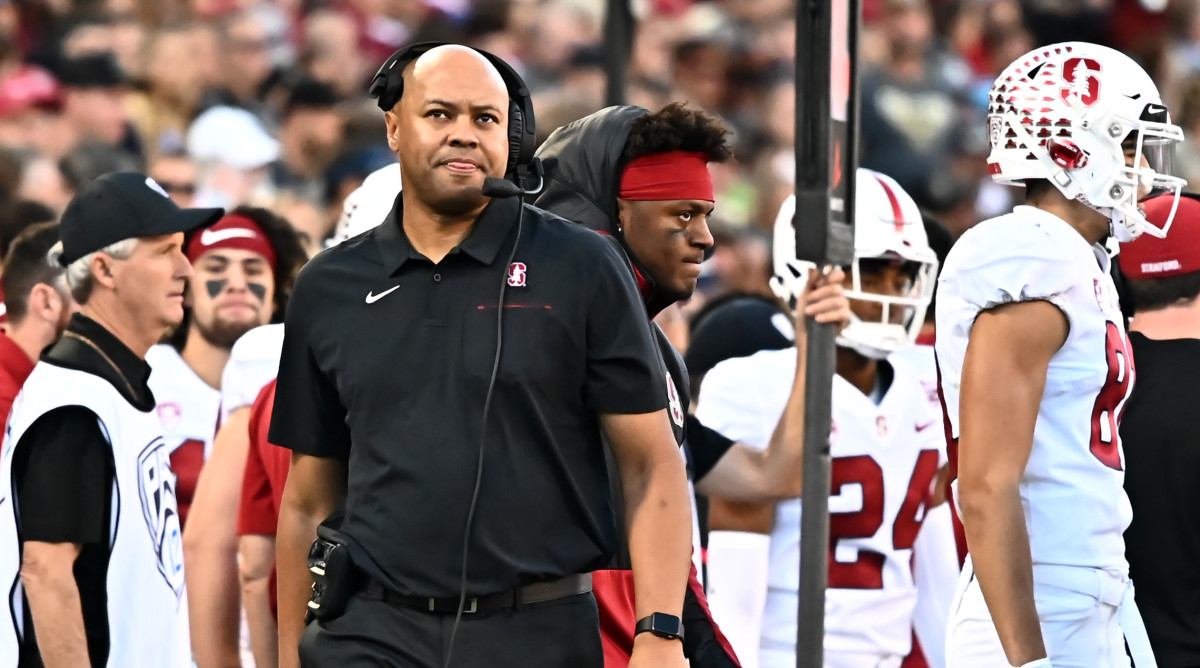 Scan down through the body now, before shifting your attention to the breath.

The Stanford players are all frozen in place with their eyes closed. Some are lying down on their backs on the grass. Others are sitting up cross-legged. The California summer sun beats down on their sweaty brows.

This moment of stillness in Stanford’s fall camp practice is a far cry from the loud hip-hop music that typically blares from the speakers as the players are constantly in motion. This is Stanford football’s daily camp meditation, a five-minute transition between the warm-up running and the rest of practice.

Imagine a ray of sunlight slowly moving down from your head, and filling up the rest of your body. Your shoulders, your arms, your finger tips…

In advance of the 2019 football season, Stanford football alum and 49ers defensive tackle Solomon Thomas made a $5,000 donation to the football program to cover five years of subscriptions to Headspace, a popular meditation app.

Thomas’s sister Ella committed suicide two years ago, weeks after Thomas’s rookie season ended. Since then, he’s become an advocate for mental health awareness. Ella was a survivor of sexual assault and she struggled with anxiety, depression and PTSD. After his sister’s death, Thomas dealt with his own mental health issues, and is still going through them. He cycled through anger, depression and confusion, and learned to find his own mental health routine of seeing a therapist weekly and meditating around twice a week to help him “untwist his mind.”

Thomas’s donation was inspired by Cavaliers center Kevin Love, who was the first athlete to donate subscriptions to the app. Love’s foundation covered subscriptions for all UCLA student-athletes and coaches.

“I thought it was important to start in college sports, at my own school,” Thomas says. “Self-love is the most important love you can give yourself. It’s important to have that foundation that you can work on every day, so when things aren’t going your way you have something you can go back to, a coping mechanism. We all should be doing that no matter how happy or how sad we are.”

Stanford head coach David Shaw says his team immediately embraced meditation, particularly for help with improving their sleep. “This age of young people, this college age group, it’s the highest percentage of anxiety and depression as long as we have been tracking that, “ he says. “So for them to have tools to help them sleep and get some rest so they can be better students and better athletes and rested to handle the next day is as important as anything else we have done with it.”

Junior tight end Colby Parkinson, who is currently preparing for the NFL draft, used to have trouble falling asleep at night. Because of their class schedule, Stanford practices late in the day, and the adrenaline from practice made it difficult for him to shut his brain off. He tried everything, putting his phone away an hour before bed time, and moving to sleep on his couch. Nothing worked until he tried the app’s guided sleep meditation.

“I used it for 60 days straight or something like that,” he says. “My phone kept sending me congratulations [on your streak] alerts. It’s nice now because I don’t have to use it every single night to fall asleep. I can kind of take myself through the meditation and then if I am restless, I can play it on my phone really quick.”

Shaw also likes to meditate as he winds down at the end of a long day. “It’s like, let me center myself at the end of the day and I can catalog what I did today,” he says. “I can prepare myself for tomorrow and be able to feel like, now I can rest because I have an idea of where my place is in all the things going on in my life.”

“Our guys have embraced the idea of the mind controlling the body,” Shaw says. “The benefits of not just meditation but visualization and positive thinking, internal motivation and directed intentionality.”

Thomas likens the feeling of a good meditation session to the mental release found in yoga’s final resting pose, Shavasana. “You feel like you are there for two hours but you are really there for three minutes,” he says. “That’s what my second or third session felt like. I was like, wow, I felt like I just got a great rest and I’m mentally set.”