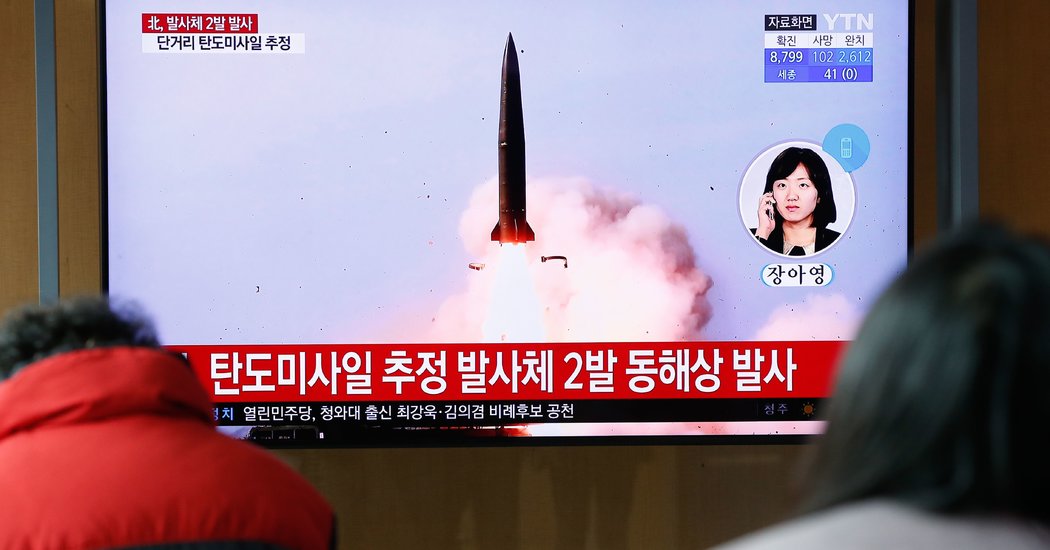 SEOUL, South Korea — North Korea fired two short-range ballistic missiles off its east coast on Sunday, a week after its leader received a letter from President Trump offering to help the country fight the coronavirus, the South Korean military said.

The missiles were fired from the port city of Wonsan, flying about 140 miles to the northeast before landing in waters between North Korea and Japan. The South Korean military provided no other details, such as the specific type of missiles launched.

It was the North’s fourth weapons test this month involving either short-range ballistic missiles or multi-tube rocket launchers.

South Korea said it was “deeply inappropriate” for the North to launch missiles as the world grappled with the coronavirus pandemic, saying it had “urged the North to stop such acts immediately.”

North Korea began large-scale live-fire military training this month as the pandemic was raging in much of the world, including neighboring China and South Korea.

The North has reported no coronavirus cases, though it has said it is waging an all-out campaign against the virus. Health experts fear that the isolated country ​does not have enough testing capabilities to uncover an outbreak, or that it might ​be hiding ​one.

​Last Sunday, North Korea said Mr. Kim had received a personal letter from Mr. Trump expressing Washington’s willingness to help the North fight the coronavirus. The North thanked Mr. Trump for the letter but said his good relationship with Mr. Kim was not enough to improve their countries’ ties.

North Korea carried out no weapons tests in 2018, when Mr. Kim was engaged in diplomacy with​ ​Mr. Trump. But it ​resumed​ short-range missile launches in May last year, three months after Mr. Kim’s second meeting with Mr. Trump in Vietnam collapsed over differences on how to denuclearize North Korea and when to ease American-led international sanctions.

Since then, Mr. Kim has repeatedly said that North Korea was no longer interested in diplomacy with Washington. He also warned that it no longer felt bound by its self-imposed moratorium on testing nuclear weapons and long-range ballistic missiles, and that the world would see a new North Korean strategic weapon “in the near future.”