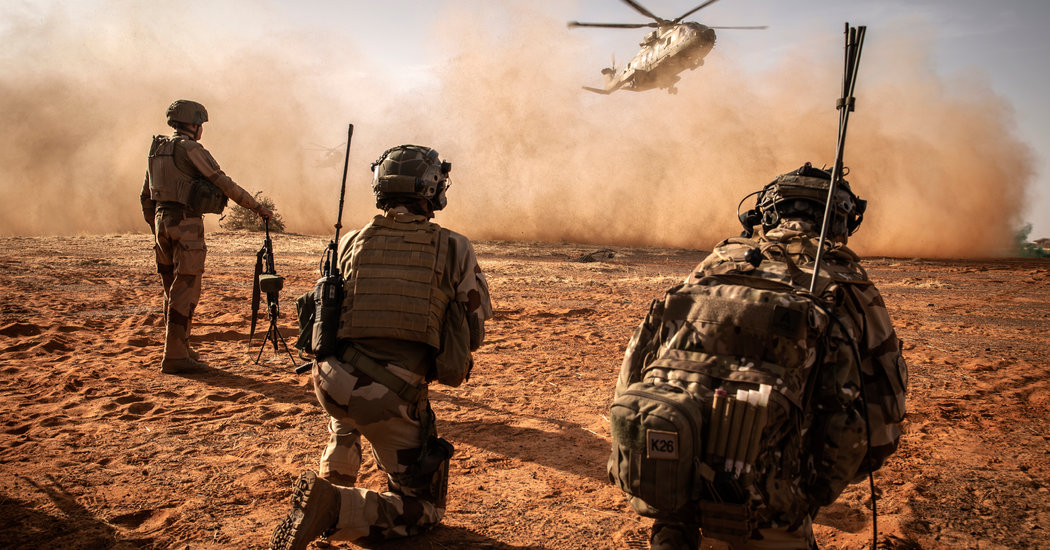 Finally, by a thicket of acacia trees, the legionnaires spotted a turbaned suspect in flip-flops, carrying an AK-47, who set off at a sprint and melted away in the distance. The soldiers found only his gun, boots, and ammunition holster under a thorny fence, and presented the findings to their officer.

When France sent its forces into Mali, a former French colony, after armed Islamists took control of the West African country’s northern cities, their mission was supposed to last only a few weeks.

That was seven years ago.

Since then, the terrorist threat has spread across the Sahel — a vast sweep of land south of the Sahara — and France’s counterterrorism fight has spread with it. As a result, more than 10,000 West Africans have died, over a million have fled their homes and military forces from West Africa and France have suffered many losses.

And still, the battle is hardly finished. The Islamic State in the Greater Sahara, a potent armed group with loose ties to the Islamic State, has been conducting sophisticated attacks in the border regions of Mali, Niger and Burkina Faso. In the past four months, militants have raided four major military outposts in Mali and Niger, killing 300 soldiers.

France now finds itself stuck in the Sahel, much like the United States found itself in Afghanistan and Iraq — spending years and billions of dollars on fighting highly mobile Islamist groups in difficult, unfamiliar terrain, with no end in sight.

French President Emmanuel Macron threatened, ahead of an emergency summit with West African presidents in January, to pull his troops out. Later, he doubled-down on the mission, promising to deploy additional 600 soldiers to join the 4,500 already in the Sahel. He also committed to work more closely with the militaries of African countries to get them better prepared to stave off attacks, and take some of the load off French shoulders.

But the task is enormous. The allies are divided by language, culture and experience.

At a French military camp outside the ancient Malian city of Gao, 15 Malian soldiers were being instructed by French airmen in how to give accurate directions to planes over the radio. The Malians’ mission was to guide a pretend fighter pilot to a pretend terrorist den — a rust-colored house, just like all the others in the city.

West African security forces have little of the equipment, training or even basic education that their French counterparts do. Most of the Malian soldiers said they had never seen a compass before, and they kept getting their directions wrong. They tested each other on the powdery sand, an empty cigarette packet marking north, a plastic cup for south.

The militants are far from defeated, with one group even managing to kidnap the politician who leads Mali’s main opposition party last week near Timbuktu.

The African Union recently said it would send 3,000 soldiers to the Sahel, and France has been trying to recruit new allies; Estonia and the Czech Republic have already signed up to send troops, while talks are continuing with Sweden, Finland and Norway.

The French defense minister, Florence Parly, flew to Washington in late January to plead for the Americans’ continued support.

French military officers interviewed in Mali and Niger last month on the runway of an air base, in the cockpit of a transport plane and in a drone control room said they are concerned about the annual loss of $45 million worth of transportation, air refueling and drones that the U.S. contributes to the French mission, which costs $1 billion annually.

But General Pascal Facon, the commander of the French mission, said in an interview that European and African armies could “easily” conquer the Islamic State in the Greater Sahara. Unlike the Islamic State at its height in Syria and Iraq, ISGS does not hold any territory and has no long roots in local communities, he said.

French troops first came to Mali at the request of Mali’s government. Although they are there to defend Malian civilians, the two groups have very little interaction.

A foot patrol of French soldiers, fully covered in flak jackets, helmets, sunglasses and half-balaclavas, skirted around a nomadic family of women and children who were packing or unpacking their hut made of sticks and handwoven mats, and their few belongings — some plastic containers, a cooking pot.

Was the family coming or going, and why? The soldiers could not ask. They had no common language. And if militants found out the family had spoken to them, the family could be killed.

When some Malian teens begged a Foreign Legion convoy for cookies, they blocked the convoy’s path, delaying them for half an hour. The boys got no cookies. In another incident, a legionnaire pointed his gun at some locals who tried to jump on the back of an armored vehicle.

The battle has taken a toll on everyone. France’s defense minister said last year that the army had killed 600 jihadists since 2015. In February, Niger announced that 120 militants had been killed, and the French military recently announced that an additional 50 were killed in Central Mali.

But France has lost 44 soldiers since 2013, including 13 in a helicopter accident last year; Niger, Mali and Burkina Faso have lost hundreds in multiple attacks on military encampments.

A fleet of fighter jets, drones, transport planes and helicopters has given the French a significant advantage, and they are often able to scatter armed groups just by flying low and aggressively over them. But even if local armies were in a position to take over, chasing terrorists from desert to dry river bed to acacia forest is not enough to bring peace to the Sahel, experts say.

“The military solution is absolutely necessary, but insufficient,” said Lori-Anne Theroux-Benoni, director of the Institute for Security Studies, in Dakar, and co-author of a recent report on violence in the region. “Everyone is mesmerized by the level of violence,” she said, “and therefore not focusing enough on prevention.”

The armed groups have enjoyed such success largely because they have exploited deep anger against the state governments, which many in the region say they see as hostile, self-interested and corrupt. Their militaries are often accused of feeding these grievances, by committing grave human rights abuses against the population.

Anti-France demonstrations, held mostly by residents of Bamako, the Malian capital, over the past six months have attracted French ire.

It is unclear at what point France will consider its work to be done, or get frustrated, and leave. Should it follow America’s example and get out?

“In the same way that French reality TV and pop music is 15 years behind the U.S., French counterterrorism mimics U.S. counterterrorism of 15 years ago,” said Hannah Armstrong, a Sahel analyst with the International Crisis Group. “In the Sahel, the Americans have already realized this is a losing battle.”

In most cases, the militants hear the long noisy convoys of the French Foreign Legion from miles away, and clear out. French commanders recognize this. They say that the idea is to keep the armed groups on the run, so they cannot settle in with the local population.

The suspected terrorist in flip-flops apparently did not hear the convoy coming, but by the time the soldiers could maneuver their vehicles to the tangle of trees where they last saw him, he was long gone — perhaps blending in with the local population.

The locals are usually too terrified to give up any suspects, knowing that when the armies have moved on, anyone who helped the military can be executed. There are no police and no courts to protect them.

The legionnaires saw a family duck into their hut. A few nomads herding camels strode past. Could the man who fled be among them? The French troops could not tell.