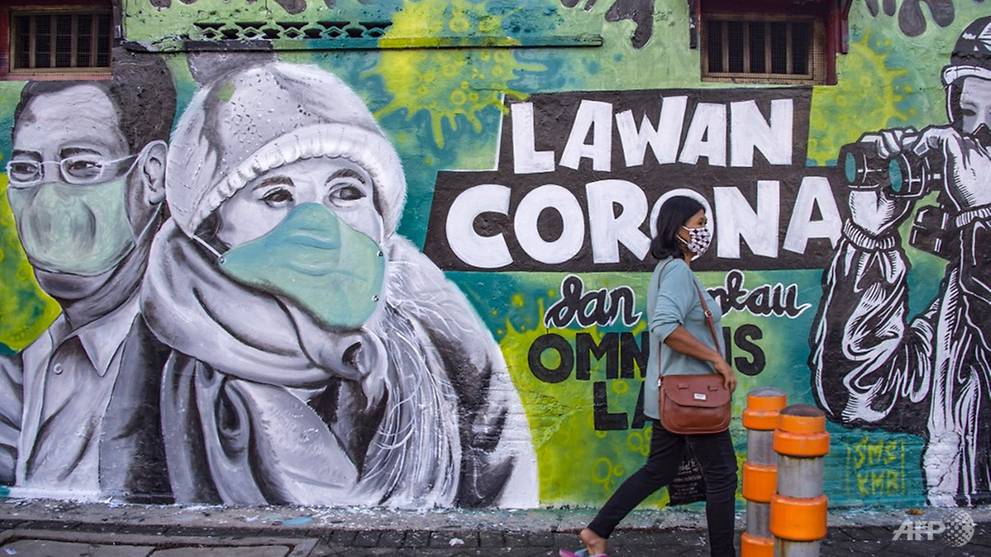 JAKARTA: The transmission of the coronavirus in Indonesia, a country with more than a quarter-billion people, may increase exponentially if the government makes no immediate effort to reduce the spread.

Using exponential function analysis, we estimate – with data gathered since Mar 2 and assuming the doubling times are similar as Iran’s and Italy’s – that at the end of April 2020, there may be 11,000 to 71,000 COVID-19 cases in Indonesia.

Indonesia might hit those numbers if the country’s handling of the coronavirus outbreak doesn’t change. Currently, there is scarce information on the location of infected patients, the number of tests carried out and areas to avoid.

There is still a lack of awareness and compliance among the public about social distancing measures. There is also a lack of sanctions against self-quarantine violations.

FRESH EFFORTS AT MANAGING THE OUTBREAK

President Joko Widodo announced Indonesia’s first two COVID-19 cases on Mar 2. In the weeks after, the number of new cases has increased rapidly.

As of Mar 27, the total number of cases nationwide is 1,046, it increased 523 times from the first day cases were announced. And there is still a high possibility of undetected infections in the community.

The Indonesian government has put in a disaster emergency plan for COVID-19 outbreak up to May 29, 2020.

Since Mar 20, the first rapid tests has been conducted in South Jakarta and the government has converted four apartment towers of the Kemayoran Athletes Village in Jakarta as a new emergency hospital to handle COVID-19 patients.

A campaign for social distancing has also begun. However, many still criticise the scale and effectiveness of these initiatives.

The Islamic fasting month Ramadan will start in end-April. During this time, Muslims, that make up the majority of Indonesia’s population, hold many activities together that involve close contact, such as breaking the fast in the evening and the following congregational prayer at mosques.

In late May, there will be holidays marking the end of Ramadan. Nearly 15 million people usually leave Jakarta during this time to travel to West Java, Central Java, East Java and other provinces to celebrate the Islamic holiday.

Indonesia should learn from the mass meeting over 40,000 families ahead of the Lunar New Year in the Baibuting District, Wuhan, China on Jan 18. The meeting is thought to be the initial medium of the mass spread of the disease throughout mainland China, which then spread into 198 countries and territories.

HOW BAD IT COULD GET FOR INDONESIA

Theoretically, interventions such as limiting social gatherings, mass testing and the isolation of positive cases should slow the number of new cases down.

This rate of increase is dynamic, depending on the period analysed and interventions conducted to slow the spread of the virus.

READ: Commentary: Has Myanmar been in denial over COVID-19 outbreak all this while?

READ: Commentary: Partying and picnicking with friends? Your complacency this COVID-19 outbreak is misplaced

To prevent the health system from being overwhelmed with patients, the doubling must be stopped as soon as possible, at the beginning of the outbreak, when the number of patients is still small.

THE FOUR PHASES OF AN OUTBREAK

In general, an infectious disease outbreak has four periods: The delay phase, the exponential phase, the static phase and the decline phase.

The delay phase is the initial phase when there are only a few people coming to medical facilities with complaints.

The incubation period provides an opportunity for the virus to multiply and spread from one person to another.

Some people who have COVID-19 do not show symptoms. Without testing, they may not realise they are carriers of the virus.

In this phase, most health authorities and the community tend to be ignorant and in some cases in denial of a looming problem.

South Korea, for example, reported its first case on Jan 20. Four weeks later, the number of new cases only reached 30.

On Feb 18, a COVID-19 confirmed patient attended a routine religious event at a church which was also attended by many other people. Two days after that, the number of cases exploded to 346.

There was a delay phase of four weeks during which health authorities were only tracing contacts of positive cases and not putting in place drastic interventions.

After that, there was an exponential growth of cases. As of Mar 18, almost four weeks after the exponential phase began, South Korea reported 8,413 cases and 81 deaths.

A protracted delay in detecting infections is usually followed by an explosion of cases. In this phase, health authorities and most people only just begin to realise the danger.

They start to panic and immediately act to control the situation. Unfortunately, health services are already being overwhelmed.

Italy is an example of a more severe exponential growth rate. The country reported its first case at the end of January. Then it started to report some positive cases from Italian citizens returning from China.

But suddenly, on Feb 20 (three weeks after the first case), an Italian citizen who had reportedly never travelled to China or had contact with anyone who came from Asia, tested positive, confirming local transmission has started.

READ: Commentary: How prepared are parents for suspension of schools if that happens?

Since then, cases have exploded and followed an exponential growth pattern. About six weeks after the first case, as of Mar 18, the SARS-CoV-2 virus had infected 31,506 people and caused more than 2,500 deaths.

Iran is an example of exponential growth rates higher than Italy’s and in a shorter period. The first case in Iran was found and reported more slowly compared to Italy and South Korea, on Feb 19.

Elections and political pressure there delayed the examination of infected patients. The government punished those spreading rumours about the outbreak, like what the Wuhan local government did in early January.

In less than two weeks, the Iranian Ministry of Health reported 593 cases and the number continues to rise. Only one month since the first case, on Mar 18 in Iran, there were almost 16,200 cases and 988 deaths.

In the next static phase, cases have increased to a point from which they start to decrease. And the addition of new cases is no longer as fast as in the exponential phase. New cases still appear, but the number is relatively stable.

Several factors may cause a decrease in this phase. First, the infection growth decreases due to interventions that reduce transmission.

Second, the community has developed some immunity and is resistant to the infection. Third, there is a reduction in people vulnerable to infection (in other words, many people have died).

The last phase is when the infection rate shows a negative trend, and the number of new cases is on a downward trend (period of decline).

The length of the period of each phase is difficult to predict. But certainly, the exponential phase will happen soon after the delay phase.

THE DOUBLING TIME IN INDONESIA

The site of Our World in Data calculates the rate of growth of new cases for various countries.

For South Korea, the number of new cases doubles every 13 days. Iran and Italy are worse, doubling every seven and five days respectively. China, in March, doubled its cases every 33 days.

Indonesia’s doubling time is two days. In other words, the number of Indonesian cases will double every two days.

If we refer to this figure, it is estimated that by the end of March 2020, Indonesia will report more than 20,000 cases.

This is a very large number and can paralyse the Indonesian health system.

But let’s assume the doubling time of Indonesia is the same as Iran (seven days) or Italy (five days), then we get a picture of cases piling up in April.

Assuming exponential growth similar to Iran and Italy, then at the end of March, Indonesia will report between 600 to 1,000 cases and by the end of April, there will be between 11,000 to 71,000 coronavirus cases.

We should note that the reported cases are people who came to a medical facility on their own. These people come after recognising symptoms resembling COVID-19 or were tracked from contact tracing of previous positive patients.

We still don’t know how many people who have COVID-19 have not, or do not want to, come for testing because almost three weeks after first case detected there is no mass testing as in South Korea and Italy.

Indonesia has just entered the exponential phase. The government must take immediate action to slow down the doubling of cases.

This can be done by first, increasing examinations of people at risk in areas where an infected case occurred or areas that have an indication of transmission. The government must utilise rapid and high detection performance tests to differentiate accurately infected and non-infected individuals.

READ: Commentary: COVID-19 self-isolation is punishing the poor in Indonesia

Second, the government should provide data on patient location at the sub-district level so the public can take part in examining themselves and avoid contact with these areas

Third, the government must raise public awareness and encourage the community to minimise contact with each other, or social distancing. For example, it should restrict mobility between contaminated districts or cities, implement strict migration surveillance to individuals returning home from contaminated areas, and apply sanctions to those who violate the mass gathering ban.

With more intensive use of science and technology and improved coordination between local institutions and cooperation between organisations at regional and international levels, we believe this pandemic can be controlled.

Iqbal Elyazar is Researcher in disease surveillance and biostatistics, Eijkman-Oxford Clinical Research Unit. Sudirman Nasir is Senior lecturer and researcher at the Faculty of Public Health, Universitas Hasanuddin. Suharyo Sumowidagdo is Physicist, Indonesian Institute of Sciences. This commentary first appeared in The Conversation.