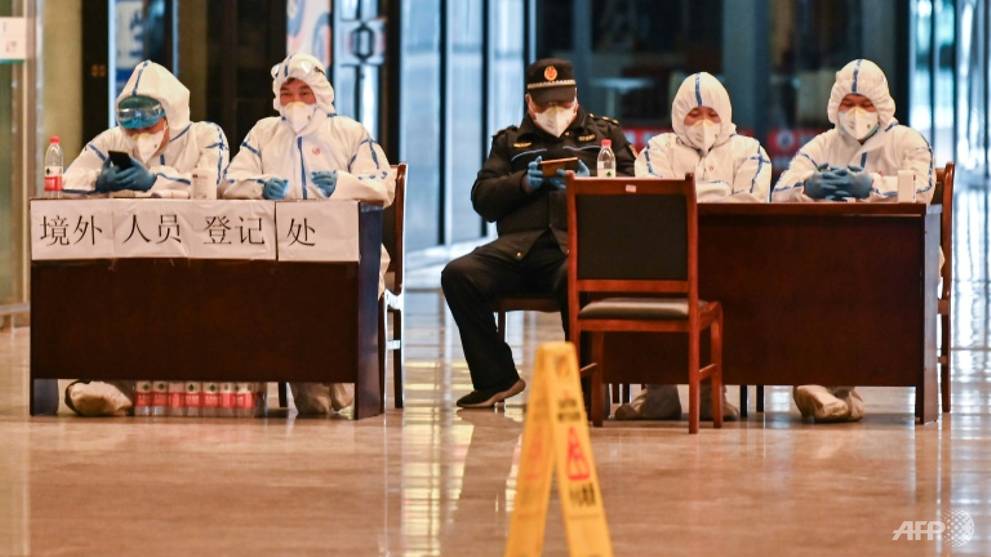 WUHAN: The ground-zero city of Wuhan is cautiously reopening after a two-month quarantine, but the birthplace of the global coronavirus pandemic is now on guard against a potential new threat: Imported cases.

Travel restrictions have been loosened, with Wuhan’s busy train station officially resuming inbound services on Saturday (Mar 28) and highways reopened as the unprecedented lockdown that kept more than 50 million people across Hubei province housebound is lifted.

READ: China reports 45 new COVID-19 cases – all but one imported

That has unleashed a reverse tide of local residents who were stranded elsewhere in China – where many reported facing ostracism or restrictions on their movements – and are now flocking back to homes they have not seen for at least 10 weeks.

The returnees – many arriving by train wearing two face masks, latex gloves and protective suits – bring with them the potential for a new round of infections, and authorities are taking few chances.

Before leaving Wuhan’s station, all passengers are required to register their personal details and travel history before proceeding through temperature checks.

They also must show either a certificate of good health or a “green” rating – for “safe” – on a mobile phone app system that has been adopted nationwide and uses big data to track whether a person visited any high-risk areas in China.

Without that, travellers must submit to a nucleic acid test for the virus, an official in Wuhan’s Jiangan district told AFP.

Those who report or who are suspected of having travelled abroad recently are sent to a separate registration area, where workers in hazmat suits check their details.

“Initially we were more scared and maybe thought it was safer overseas,” said Han Li, who is involved in processing returnees to the city.

“But now it doesn’t seem this way. It seems it might be safer within China.”

READ: Commentary: Will COVID-19 bring on the next Great Depression?

In Wuhan, which at the peak of the crisis recorded thousands of fresh cases daily, that has dropped to zero.

But with the United States, Europe and other regions now struggling with their own outbreaks, China is reporting dozens of imported cases each day, and has shifted the focus of its prevention effort to the external threat.

China took the dramatic step of announcing Thursday a cut in the number of international flights to just one route per week to and from each country, limiting the passenger capacity of flights to 75 per cent, and imposing a ban on most foreigners entering China, even those with valid residence visas.

Underlining the risks to Wuhan, huge numbers of passengers have crowded onto trains and buses to return home, threatening to swamp the traumatised city’s containment measures.

In the nearby city of Huanggang, several hotels remain closed, diners are still forbidden to eat inside restaurants, with only take-out offered, while signs hanging in the streets warn of the continued threat.

“Gathering to play cards is suicide,” said one roadside banner.

On Saturday, a district health worker in Wuhan pried open the glass doors of a shuttered hotel that was previously used to quarantine suspected COVID-19 patients, in order to set up a virus-testing site.

AFP reporters who arrived recently in the city were among those told they must take the test, conducted in a make-shift manner while seated on a plastic stool outside the hotel entrance as a health worker took throat swabs.

The test subjects included a local woman whom the health worker said was a recovered COVID-19 patient.

Employees at multiple international hotels in the city told AFP that no foreigners were allowed to book rooms due to the ongoing pandemic.

At least one hotel said foreign guests must have proof that they had completed a two-week quarantine, even if they had stayed in China since before the outbreak.

Wuhan’s measures are similar to those imposed by local governments elsewhere in China, with many provinces requiring international arrivals to isolate themselves at home or in designated quarantine facilities for 14 days.

Restrictions on residents heading out of Wuhan will not be lifted until Apr 8, when the airport will also reopen for domestic flights.

A study this week found the lockdown in Wuhan had succeeded in containing the virus, but cautioned against opening up the city too soon.