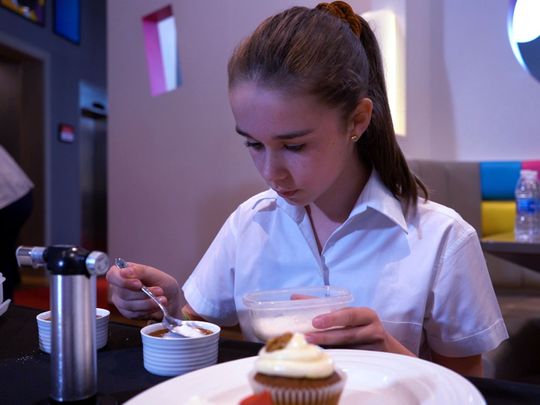 Another season of the UAE-based reality show ‘Foodshala Kids’ is about to add a bit of spice to the evenings as denizens stick close to home during these turbulent times.

This season, close to 8,000 students from across the UAE vied for a spot to impress this year’s judges. This was whittled down to 12 teams who battled it out to win the top prize, which included a trip to Disneyland Paris, a cooking course, a kitchen and a fashion makeover.

As the show readies to air in the UAE, returning judge and show producer Tandon spoke to Gulf News tabloid ahead of the season three premiere to tell us what’s cooking on the show.

What can we look forward to in this new season of ‘Foodshala Kids’?

For the first time, ‘Foodshala Kids’ has gone into schools to help choose teams. This year, we have interacted with more than 8,000 kids and helped schools identify the best talent for the official school team to represent them at the mega auditions.

Now, here’s the clincher … this season will see one of the most loved celebrity chefs and one of the most respected food show judges of our times, Chef Gary Mehigan, who’s come all the way from Australia.

How different will this season be from previous ones?

At the end of the day it is a cooking competition where we are looking for this year’s champion school. Having said that, it’s a reality TV show and reality is always new with new people and new situations and that’s what makes every season unique. The tasks this year are slightly more complicated for the kids.

Were there moments on the show that really stood out for you?

Since the show hasn’t gone on air, I can’t divulge much information but I’ll tell you this, in one of the episodes, the kids created a complete dining experience for the judges by playing the violin live while the tasting was happening (they were bringing the element of live entertainment with their dishes). Now that’s something that will stick with me and the judges too.

Can you take us through the participation and audition process?

Since the show has become extremely popular in the last three years, now we start getting entries from schools much before we even roll out our communication. The process is simple: every school that wants to participate has to register with us.

We have a team that is powered by ICCA [International Centre of Culinary Arts] Dubai that goes to schools that need our help in choosing their best two kids to form their team. With the help of the mentors (either the teacher or one of the parents) the kids prepare and at the auditions, we have a tasting session for all the teams.

This year, the judges for the auditions were Chef Edward Clegg (Head Instructor at the ICCA Dubai), Chef Margarita Vaamonde-Beggs (Head Chef at MasterChef, the TV Experience restaurant) and myself. Based on taste, creativity and presentation we choose the top 12 teams.

The UAE is known for its diverse cultures. Was this reflective in the participants who made the cut?

We had western expats, Arabs and Asians too. The reason for this is that the show is an inter-school competition. For the same reason, the show is shot completely in English and hosted by Amy Kitchenman, a popular British TV personality.

A lot of people believe that due to its name, the show is predominantly Asian and that is absolutely not true.

In the past, you have worked with Chef Sanjeev Kapoor and the late Chef Gary Rhodes. What have you learnt from each of them over the years?

Yes, I have had the pleasure and the honour of working with the best in the industry on both formats of ‘Foodshala’. Chef Sanjeev Kapoor is a father figure to me and has been friend, philosopher and guide throughout the series. One of the things that we have learnt from him in our association over the past eight years is that ‘everything is possible and everything can be done’. In all these years we have taken a lot of (sometimes even unreasonable) requests and ideas to him and he has never said no.

And the late Chef Gary Rhodes definitely was a thorough gentleman. ‘Foodshala Kids’ season two was the last TV show that he did before his untimely demise and for us it was really an honour working with him. I still remember he tasted the dishes of the finalists three times and kept going over each point with me before coming to the final decision; he wanted to make sure that his decision was absolutely right.

Tell us about working with Chef Gary Mehigan.

We have all seen him for the past 11 years on ‘MasterChef Australia’. To be honest, he has always been my favourite of the three judges on the show and I was very keen that he should once come and judge ‘Foodshala Kids’…. And it happened this time.

Gary is a complete people’s person and he owns the set right from the time he walks in. He has his very distinct style of judgement and is so balanced between encouraging the kids while being brutally honest.

What really goes behind putting together a food-based reality show? Are emotions constantly running high?

Oh yeah! The team that works on a reality TV show is always on edge. When normal people (more so with kids) are placed on a set with 10 cameras, a time limit and something as exciting as a trip to Disneyland Paris at stake, we are walking on thin ice. Tempers are flaring, kids are forgetting recipes, sometimes they leave their dish in the oven and forget it; other times they have used sugar instead of salt. On a reality TV show set everything that can go wrong (sometimes) does go wrong.

Where do you want to take ‘Foodshala’ and ‘Foodshala kids’ from here?

The plan is to definitely take the show regional. We already have a lot of schools from other GCC countries contacting us and hopefully next year we will add at least a couple of new countries.

How different is the process of judging a reality-based food show when the participants are children?

I am always wary of ensuring they get feedback that is constructive that they can learn from. And it’s important to always be encouraging, and engaging with them. I tend to have a bit more fun with the kids, [and] keep it light-hearted.

What are you looking for in contestants — passion, dedication, presentation, taste or all of the above?

All of the above. Taste has to be the final determination between two dishes that we think are close, but presentation is important as we eat with our eyes.

Over the years, have there been moments during the shoots that have left a lasting impression on you?

I think Julie Goodwin winning the season one finale of ‘MasterChef Australia’ is forever ingrained in my memory, but after 11 years and over 15 series including ‘Junior MasterChef’ and ‘Allstars’, there are so many. Working alongside some of the greats like Marco Pierre White, Gordon Ramsay, Jamie Oliver, Yotam Ottolenghi and Nigella Lawson, to name some of the amazing chefs and judges we had on the show, was incredible.

Tell us about your experience on ‘Foodshala Kids’.

It was great to be back in Dubai and so much fun working with the kids in the finale. The crew were fantastic to work with, it was just a great positive experience.

What is your idea of a perfect meal?

Roast chicken and crispy roast potatoes at home with my family, followed by cheese. It’s my kryptonite!

Kids these days are really talented and are very sure about their likes and dislikes. Many of them also show a huge interest in cooking, from a very young age. So, going by the history of ‘Foodshala’, I feel the ‘Kids’ version is going to be a great platform that will encourage a lot of young ones to hone their skills and knowledge in food and cooking.

The ideal quality in budding chefs …

To be the ‘chosen one’ amongst the entire lot, one has to top in all criteria — taste, presentation, passion and dedication. In fact, more.

Novices teaching the master chefs something new in the kitchen …

Regardless of the age, every chef or individual who is passionate about cooking has something to offer. When it comes to this particular profession, you never stop learning because there is always something new out there in the market.