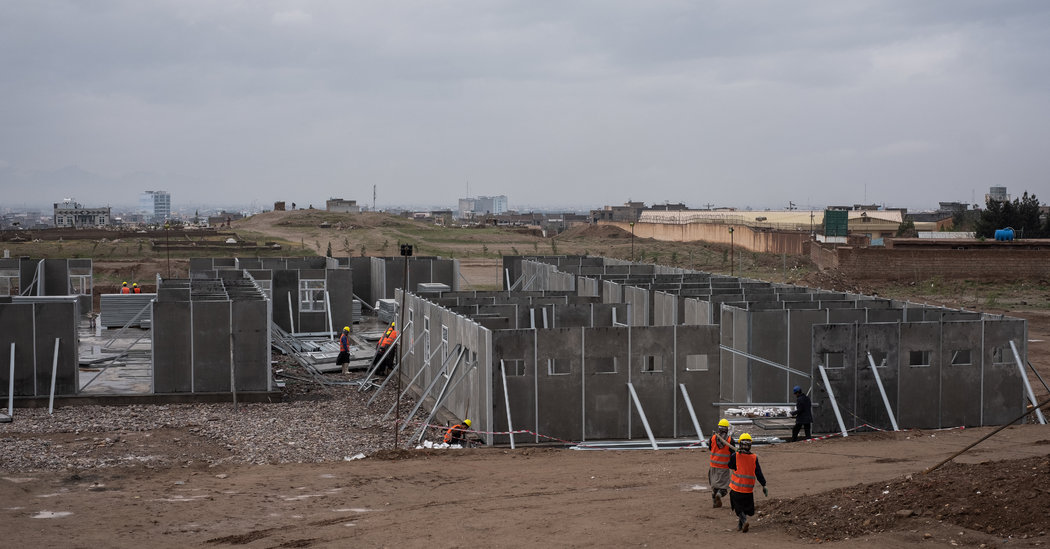 KABUL, Afghanistan — The Taliban on Saturday attacked several provinces in northern Afghanistan, overrunning large parts of one district even as American diplomats expressed optimism that a peace process stalled over the release of prisoners was getting back on track.

The insurgents launched major assaults in the provinces of Kunduz, whose capital was overrun by the Taliban repeatedly in recent years, as well as in Faryab and Badakhshan. Some of the worst fighting occurred in Badakhshan Province, where the insurgents took control of much of the district of Yamgan and inflicted heavy casualties on Afghan forces in another district, Jurm.

Amanullah Iman, who leads the executive branch of the district office, said hundreds of Taliban fighters attacked soon after dawn and captured the district center after three hours of fighting. “There were five outposts in Yamgan district center, and the Taliban captured all of them,” Mr. Iman said. “The security forces escaped to a military base in another part of this district.

The fighting rages despite an appeal for a cease-fire on humanitarian grounds to slow the spread of the coronavirus across the country. In the dozen Afghan provinces that have reported positive cases, the Taliban launched more than 300 attacks last week. The capital, Kabul, as well as the western city of Herat, which has the largest number of cases as it shares a porous border with the badly hit Iran, have gone under partial lockdown.

“During the day, we fight coronavirus. At night, our brothers, the Taliban. In the morning, we hold meetings on coronavirus. In the afternoon, on security,” said Naqibullah Faiq, who is a doctor and the governor of northern Faryab Province, where the Taliban have tried to overrun the Almar district in days of fighting.

“This might be the dumbest war in the world’s history — that the world is going to quarantine, and we are busy fighting each other,” he said.

In the Jurm district, officials initially feared that the Taliban had killed dozens of Afghan forces after more than 30 soldiers were unaccounted for the attacks. But around noon, 20 of the missing soldiers made their way to the district center, according to Abdullah Naji Nazari, a member of the provincial council in Badakhshan.

“They told me that the Taliban killed 10 of the unaccounted soldiers, and three soldiers were taken prisoners,” Mr. Nazari said.

In Kunduz Province, the Taliban launched attacks in the Ali Abad district, where two police officers were killed. For days now, intermittent fighting has also been reported on the outskirts of Kunduz City.

The violence continues even as U.S. diplomats and Afghan officials reported progress on the release of prisoners and preparations for direct negotiations between the Taliban and the Afghan government. Both steps are laid out in a deal signed between the Taliban and the United States last month, but it was delayed by disagreements and complicated because of travel restrictions around the pandemic.

As part of the deal, up to 5,000 Taliban prisoners must be freed in exchange for a thousand Afghan prisoners held by the insurgents. After the government of President Ashraf Ghani vehemently disagreed, details of a phased release have been ironed out with the Taliban in negotiations held via video conference calling over the past week.

The prisoner release is expected to begin on March 31.

The agreement over a negotiating team took nearly a year of effort and consultations with different factions, and was hampered by an election crisis that has split the country’s government. Mr. Ghani was declared the winner, and his chief rival, Abdullah Abdullah, also swore himself in as president.

The United States cut $1 billion in aid to the government because the two men couldn’t sort out their disagreements, which have threatened to derail the U.S. peace plan that offers an exit from the long war.

On Friday, the chief American diplomat leading the peace efforts, Ambassador Zalmay Khalilzad, welcomed the announcement of a negotiating team.

“This consensus is a meaningful step that moves the parties significantly closer to intra-Afghan negotiations,” Mr. Khalilzad said.