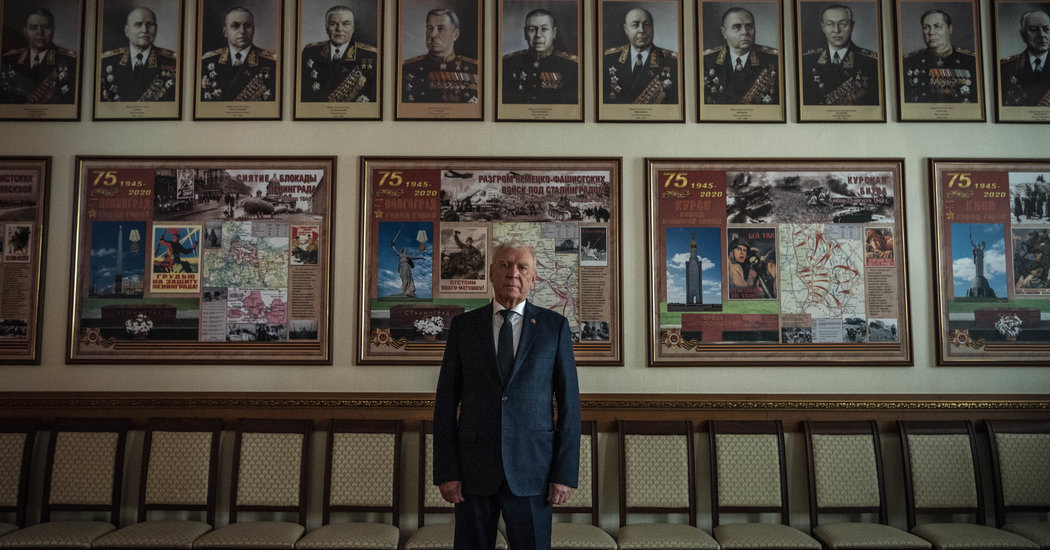 MOSCOW — When local officials bearing flowers and a medal arrived to pay tribute to a 93-year-old grandmother and war veteran at her home north of Moscow, they didn’t get quite the welcome they expected.

As one of the officials leaned in for a hug, the honoree’s granddaughter jumped in to stop it.

“I said: ‘This is my grandma, my apartment,’” recalled Yevgeniya Ovod, who had been doing her best to keep her grandmother isolated from the outside world and the coronavirus. “‘I’m asking you to leave.’ Honestly, I pushed her out.”

Such ceremonies to celebrate war heroes have been happening in homes and schools and at veterans’ unions all across Russia ahead of the 75th anniversary of the Soviet victory in World War II.

But the coronavirus has turned the festivities into a life-or-death matter for the country’s dwindling number of living veterans of the war.

The pandemic is also disrupting the ambitious vision of President Vladimir V. Putin to glorify the triumph, and his own leadership.

Victory Day, marked on May 9, is Russia’s main national holiday and has long been a cornerstone of the great-power patriotism cultivated by Mr. Putin. This year’s edition has been planned as one of the biggest celebrations yet, doubling as a coronation of sorts for Mr. Putin on the heels of a constitutional overhaul that could allow him to rule for life.

But now, the May 9 military parade on Moscow’s Red Square, usually observed by world leaders hosted by Mr. Putin amid throngs of veterans and other spectators, may be canceled because of the pandemic, the Kremlin said. The April 22 referendum to approve the constitutional changes has already been postponed.

Russia has reported more than 1,200 coronavirus cases and four deaths, with steep increases in the numbers of infections reported in recent days.

The epidemic for now is still centered in Moscow, but experts say that while Russia has so far avoided the dire scenarios seen in parts of Europe and the United States, the virus may be primed to wreak widespread havoc here as well — with older people, as elsewhere, at greatest risk.

Despite their vulnerabilities, World War II veterans and survivors in their 80s and 90s have continued to be invited to gatherings all over Russia in recent weeks. Under decrees from Mr. Putin, all living veterans and many other war survivors get a payout of 75,000 rubles — about $1,000 — as well as a medal to be awarded “in a festive setting.”

Several hundred thousand people will get the awards, according to official figures. While the cash is being transferred electronically, the medals are being presented by local officials in ceremonial gatherings and in visits to veterans’ homes.

Lyudmila Klimentenko, an 86-year-old survivor of the siege of Leningrad, opened her mail last week to find an invitation from her city’s mayor to a “festive event” for an award ceremony at which she and scores others would receive their 75th anniversary medals.

“Is this to send us all to the other world?” she remembered asking.

Her city, Pskov, on the border with Estonia, postponed the event after an outcry initiated online by Ms. Klimentenko’s son, Igor Batov, an environmental activist. But districts in St. Petersburg and other cities went ahead in recent weeks with medal awards ceremonies bringing veterans together with dozens of others.

“Despite everything, the cycle of events dedicated to the 75th anniversary of Victory in the Great Patriotic War continues,” said a social media post Tuesday by the administration of the Starozhilovsky District southeast of Moscow. It was accompanied by photographs of two local officials visiting war survivors in their homes.

Some of the events honoring veterans have been scaled back, and organizers say that they have taken care not to violate their local and regional administrations’ fast-evolving social distancing orders.

In Ivanovo, northeast of Moscow, a spokeswoman for the city branch of the ruling United Russia party said schoolchildren were no longer participating in the events, and that attendance at last week’s gatherings was below the limit of 100 set for the city at the time.

In addition, organizers cautioned the invited veterans about the risk of coronavirus infection, and many chose not to attend, the spokeswoman, Marina Koprova, said.

Ms. Ovod, a municipal politician in the city of Yaroslavl north of Moscow, had suggested to her grandmother, Venera Ovod, that she forgo being awarded the medal in person because of the coronavirus. But she said that was out of the question for her grandmother, who is the only surviving World War II veteran in her community and takes part in Victory Day celebrations every year.

“Any social interaction is really valuable and important,” Ms. Ovod said of her grandmother. “Pandemic or no pandemic — it doesn’t matter.”

Critics say that mixed messages from Moscow on how seriously the authorities should take the epidemic — and local officials’ determination to follow Kremlin orders — have put elderly veterans at greater risk.

In one example of the confusion, Mr. Putin on Wednesday declared the coming week a paid holiday, prompting Russians to book vacations. This in turn resulted in a clarification from the Kremlin on Friday that the holiday’s purpose was not to foster travel but to reduce social contacts as much as possible.

Many of the veterans’ events take place in schools. Daniil Ken, a teachers’ activist based in St. Petersburg who has been tracking the events and calling for a halt, said it’s clear to officials that bestowing the Victory Day medals amid great fanfare is a top priority for Mr. Putin.

“It’s a cheap, populist way to buy loyalty,” Mr. Ken said of the medal ceremonies. “The local officials doing this fear taking the responsibility upon themselves to make the decision to temporarily stop these gatherings.”

Valentina Bushuyeva, an 80-year-old survivor of the siege of Leningrad, joined four other veterans and war survivors to be awarded medals at a gathering on the outskirts of Moscow last Friday. The number of confirmed coronavirus cases in Moscow had shot up to 131 that same day, but Ms. Bushuyeva said she didn’t see any risk in leaving her home at the time. It was only in the days that followed, she said, that Russian officials seemed to sound the alarm on TV.

At the gathering, at the local veterans’ office, the guests drank tea, and Ms. Bushuyeva recounted her memories of the war: living near a cemetery where bodies were deposited in a mass grave. A million people died in the Nazis’ siege of Leningrad, now St. Petersburg — among the 27 million Soviets who perished in World War II.

In a telephone interview several days after the ceremony, Ms. Bushuyeva said she’s now not sure whether she would go to a veterans’ gathering again with the coronavirus spreading — and whether the May 9 Victory Day parade should be held.

“It’s hard to say — it’s such an important day, but at the same time, you have to safeguard the people,” Ms. Bushuyeva said.

Mayor Sergei Sobyanin of Moscow on Monday called on everyone over 65 to stay home and promised a payment of 4,000 rubles — $50 — to those who followed the order.

But Mikhail Moiseyev, the 81-year-old chairman of the Russian Union of Veterans and the onetime head of the general staff of the Soviet Armed Forces, said he was still working and holding meetings. Preparation for the May 9 parade was continuing at full speed, he said, unless and until Mr. Putin decided to definitively cancel it.

“A parade is a banner — an unfurled banner,” Mr. Moiseyev said. “No disease can change that.”