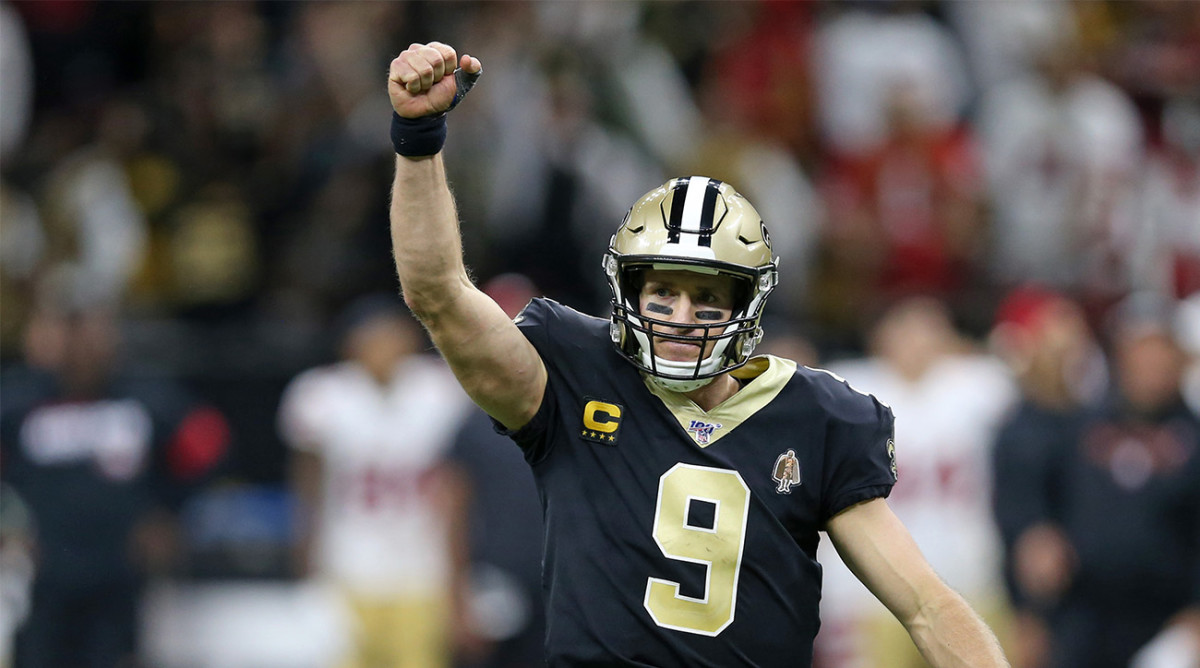 The Drew Brees-led Saints have won the NFC South three years in a row and are the favorites to take home the division crown again in 2020. But the Buccaneers’ win total jumped when the news of Tom Brady signing with Tampa Bay was announced. Here’s a breakdown of the Over/Under win totals and current odds for the Panthers, Falcons, Buccaneers and Saints.

2019 was the end of an era for the Panthers with the firing of nine-year head coach Ron Rivera, All-Pro linebacker Luke Kuechly retiring, tight end Greg Olsen signing with the Seahawks and the team ultimately releasing quarterback Cam Newton. Carolina finished with a 5-11 record last year, their third losing season in the last four years.

The Panthers hired Matt Rhule to take over as head coach in early January. The former Baylor coach signed a seven-year, $62 million contract.

Once Bridgwater signed his three-year, $63 million contract, the writing was on the wall about Newton’s future with the team. Still only 27 years old, Bridgewater was the perfect offseason quarterback signing for a team looking to win now but also building for the future.

Carolina also signed explosive wide receiver Robby Anderson to a two-year, $20 million contract. Anderson joins a receiving corps featuring D.J. Moore and Curtis Samuel. Combine that trio with one of the best running backs in the league when it comes to catching passes in Christian McCaffrey, and it’s clear Bridgewater will have plenty of weapons at his disposal.

What Sports Illustrated’s Panthers reporter thinks about the Bridgwater signing:

Offensive coordinator Joe Brady and Teddy Bridgewater were both together in New Orleans during the 2018 NFL season in Bridgewater’s first year with the Saints… Luckily for Teddy Bridgewater, he already has a past with Brady and is familiar with his new OC’s coaching style and the system he will likely implement in Carolina.

With their roster turnover and change at head coach, the Panthers will have a completely different look and feel in 2020 compared to 2019. They need to improve their abysmal 1-5 record against divisional opponents in order to have a chance to reach the over on their posted total of 5.5. Four of their road opponents (Vikings, Packers, Chiefs, Saints) all made the playoffs in 2019, which doesn’t bode well for an improvement on their 3-5 road record from a year ago.

The Play: Stay Away. The juiced up under at $125 isn’t worth risking to bring back $100, especially with the half-game built into their win total.

A second consecutive season with a 7-9 record leads some to believe 2020 could be a make or break year for head coach Dan Quinn. He’s entering his sixth year with the team but made the playoffs twice, one of which includes a loss in the Super Bowl. The Falcons’ biggest strength is their offense, which now features a first-round pick at every skill position.

After releasing running back Devonta Freeman, the Falcons signed 26-year-old Todd Gurley to a one-year, $6 million deal. Gurley steps into an ideal situation with an Atlanta offense that gained the fifth-most yards (379.7) on a per-game basis. In 2019, Freeman had 184 rushing attempts and 59 catches. That’s a workload total that Gurley should easily be able to fill despite the questions concerning the health of his arthritic knee.

What Sports Illustrated’s Falcons reporter thinks about the Gurley signing:

He will likely be eased into the fold and utilized similarly to how the Rams used him in 2019, playing the most important downs of the game and sharing the bulk workload with other backs, especially early in the season. Gurley did average 14.9 carries per game in 2019, but only 3.8 yards per carry

The Falcons ended 2019 with a 4-1 record in their final five games and had impressive wins against the 49ers and Saints, but losing seven of their first eight games to start the year destroyed their chance of a postseason birth. Atlanta split their divisional matchups with the Buccaneers last year, a feat that will be much tougher this season considering Tampa Bay’s upgrade at quarterback with Tom Brady. According to William Hill, a whopping 83% of bets on the Falcons win total have come in on the over.

The Play: Atlanta will finish with an above .500 record, take the over.

2019 was Bruce Arians’ first year in Tampa Bay and the team’s offense immediately saw a jump in production. They scored the third most points in the NFL with 458, a nice improvement from their 396 points in 2018. But Jameis Winston’s 30 interceptions was a league worst and his inconsistencies (along with Tom Brady’s free agency availability) led to the Bucs cutting ties with the 2015 first overall selection.

Signing Tom Brady to a two-year, $50 million contract wasn’t just Tampa Bay’s biggest acquisition this offseason, it was the biggest signing of the entire NFL offseason and one of the most discussed free agent acquisitions in NFL history. Brady brings much needed stability and consistency to the Buccaneers’ offense that Jameis Winston simply couldn’t offer. Winston had more interceptions in 2019 (30) than Brady’s last four seasons combined (29).

What Sports Illustrated’s Buccaneers reporter thinks about the Brady signing:

It takes more than one player to change a culture, but when it’s someone like Brady, who has proven he can maintain a level of excellence on a season-by-season basis for two decades, that mindset can be contagious.

The news of Brady signing in Tampa Bay sent the sportsbooks into a frenzy. The Buccaneers opened the offseason with 60-to-1 odds to win the Super Bowl and skyrocketed to 14-to-1 after Brady signed. Their win total also jumped up by two games. With the Packers, Chiefs, Vikings, and Saints, all of which made the playoffs in 2019, traveling to Tampa Bay in 2020, the Bucs must improve their 2-6 home record from a year ago. With Brady now at the helm, that’s certainly a realistic expectation. According to William Hill, 67% of the total number of tickets for the Buccaneers’ win total has come in on the over.

The Sean Payton-coached squad won their third straight division title in 2019 while winning double-digit games for the third consecutive season. Despite winning 13 games during the regular season (tied for the second-best record in the NFL), the Saints were forced to play in the opening round of the playoffs, where they lost to the Vikings in their wild-card matchup. It was another letdown year for quarterback Drew Brees and Co. who dominated the league during the regular season but were once again upset at home in the postseason.

Wide receiver Michael Thomas set a new single-season reception record by hauling in an eye-popping 149 catches. While that is a great testament to Thomas’ insane talent, it also highlights the lack of options Brees had at his disposal. Signing Sanders should do wonders for the Saints offense, especially in downfield passes. In 2019, Brees had just two completions over 20 yards and none over 40, both of which ranked near the very bottom in the NFL.

What Sports Illustrated Saints reporter thinks about the Sanders signing:

Sanders legitimately becomes a top threat in the Saints offense, presumably lining up opposite of Michael Thomas. However, he’s willing to do whatever Payton asks of him, and that he’s just going to be himself. His role hasn’t been carved out yet, but Sanders is ready to put in the work to be the best he possibly can.

The oddsmakers have the Saints as the favorite to win the NFC South for what would become their fourth consecutive division championship. However, their divisional opponents made a lot of improvements, which is going to make their 5-1 record against NFC South teams difficult to replicate. When Brees missed five games in 2019, the Saints didn’t skip a beat, winning all five of their games with Bridgewater under center. But that won’t be the case in 2020 if the 41-year old passer misses action in 2020.

The Play: NFC South teams got significantly better this offseason, take the under.