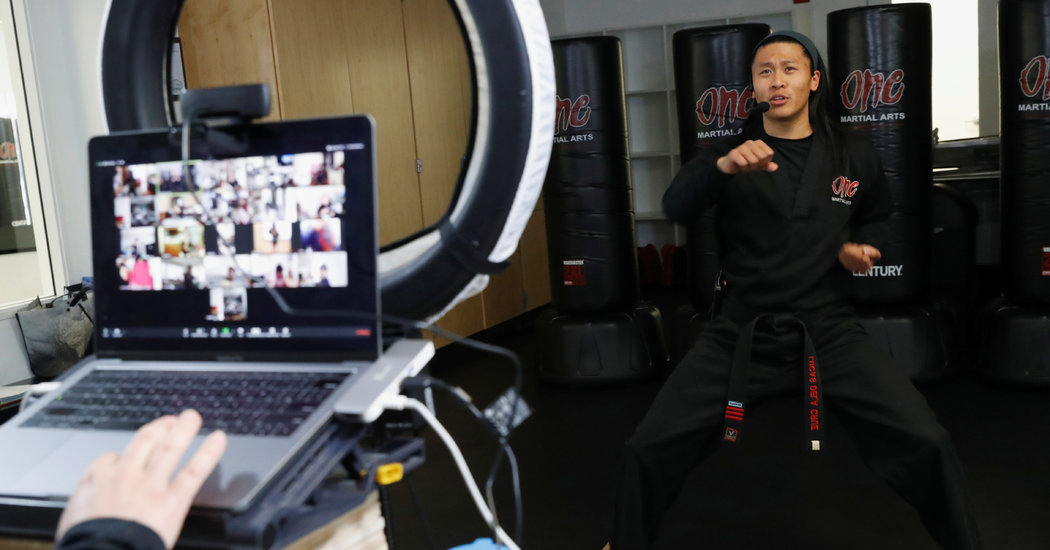 Next week, Bits will be evolving into the On Tech With Shira Ovide newsletter. With a pandemic upon us, the significant effect that technology is having on our families, work, safety and sense of self is even more apparent. What is this reliance on technology doing to us and our communities — and is it good or bad? Shira will be your guide to this constantly changing world, during the coronavirus crisis and beyond.

If you no longer wish to receive the email, simply unsubscribe using the email address at the bottom of this newsletter before Monday.

We appreciate your readership, and we’re eager to hear your thoughts on what you want more or less of so we can make the newsletter experience even better for you. Please share your thoughts on this form. A reporter or editor may follow up with you to learn more.

We were already so dependent on technology. Now, even more so.

Hi, I’m Cade Metz. I write about emerging technology in The New York Times’s San Francisco bureau. Like many of you, I’m working from my home.

As my colleagues Mike Isaac and Sheera Frenkel reported, the volume of messages sent via Facebook and Instagram has grown more than 50 percent in countries that have ordered people to stay home amid the coronavirus outbreak. Voice calls over Facebook apps have more than doubled. In Italy, where a tight quarantine is in place, the number of group calls has climbed more than 1,000 percent.

And those are just the top-level stats from a single company.

As our dependence continues to rise, the question is whether the technology — and the companies behind it — can handle the added strain. If they can, their hold on our lives may grow even tighter.

Videoconferencing apps like Zoom and Google Hangouts, not to mention good old fashioned phone calls, are rapidly replacing the face-to-face communication so many of us crave. Microsoft said the number of people using its Teams app — a way for business colleagues to collaborate — grew 37 percent in one week, rising past 44 million.

Not everything can be delivered over the internet as easily as a video feed, but online retailers are an increasingly important path to all the stuff that can’t. Amazon is hiring more than 10,000 more workers to deal with the enormous spike in online shopping.

Nextdoor, a social networking app for connecting with neighbors, is helping people get their hands on prescription medicines and all sorts of other stuff they cannot exactly order through Amazon. As described by John Herrman, a Times tech and media reporter, no physical contact is required.

In the long run, the companies behind all this technology could emerge from the pandemic as an even greater force in our lives. So said a Mount Rushmore of Times tech reporters: Daisuke Wakabayashi, Jack Nicas, Steve Lohr and Mike Isaac.

But in the short term, these companies are facing their own problems.

Facebook’s chief executive, Mark Zuckerberg, told The Times that the company was “just trying to keep the lights on” as its more than 45,000 employees — who are themselves working from home — struggled to accommodate the traffic increase. The surge is slowing download speeds and degrading video quality, as my colleagues Cecilia Kang, Davey Alba and Adam Satariano explained.

According to The Washington Post, workers at 10 of Amazon’s warehouses have tested positive for the coronavirus, and some facilities have been temporarily shut down for cleaning. Other workers have been quarantined.

Google and Facebook could lose more than $44 billion in revenue this year because of the pandemic, as the world’s businesses cut back on advertising. Of course, as Variety’s Todd Spangler pointed out, both tech giants will still be enormously profitable.

Though advertising dollars are dropping, the appetite for news on these services is moving rapidly in the other direction. According to an internal company report obtained by The Times, the past few weeks have brought “an unprecedented increase in the consumption of news articles on Facebook.”

Everyone wants to know what’s happening and what to do. Hopefully, the news will keep coming even as the ad dollars keep dropping.

We’d love your feedback on this newsletter. Please email thoughts and suggestions to bits_newsletter@nytimes.com.