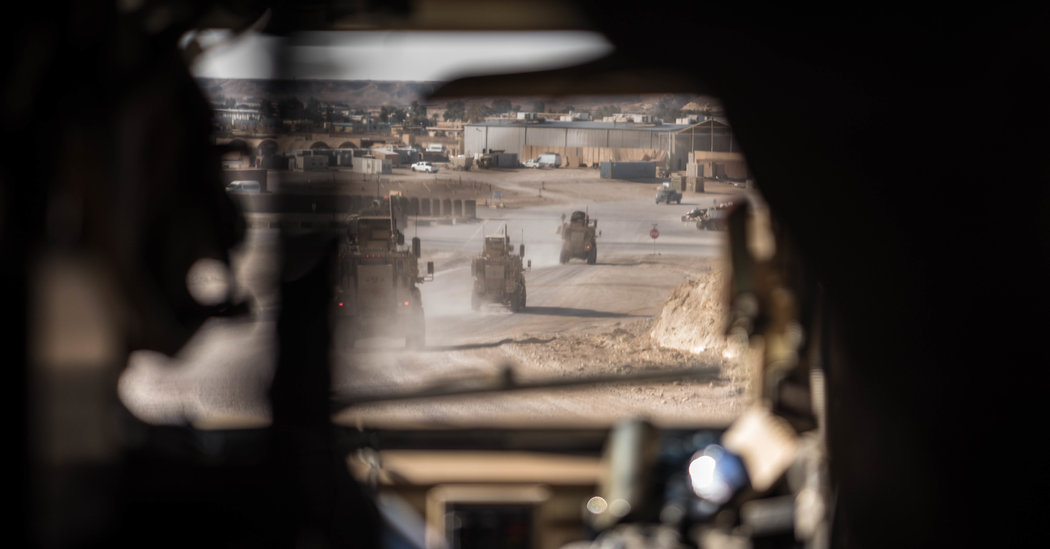 WASHINGTON — The Pentagon has ordered military commanders to plan for an escalation of American combat in Iraq, issuing a directive last week to prepare a campaign to destroy an Iranian-backed militia group that has threatened more attacks against American troops.

But the United States’ top commander in Iraq has warned that such a campaign could be bloody and counterproductive and risks war with Iran. In a blunt memo last week, the commander, Lt. Gen. Robert P. White, wrote that a new military campaign would also require thousands more American troops be sent to Iraq and divert resources from what has been the primary American military mission there: training Iraqi troops to combat the Islamic State.

The Pentagon directive and General White’s response — both classified internal military communications — were described by several American officials with direct knowledge of their contents. The exchange comes amid a simmering fight inside the Trump administration over policy toward Iran and the course of America’s war in Iraq, which began just over 17 years ago.

Some top officials, including Secretary of State Mike Pompeo and Robert C. O’Brien, the national security adviser, have been pushing for aggressive new action against Iran and its proxy forces — and see an opportunity to try to destroy Iranian-backed militia groups in Iraq as leaders in Iran are distracted by the pandemic crisis in their country.

Military leaders, including Defense Secretary Mark T. Esper and Gen. Mark A. Milley, the chairman of the Joint Chiefs of Staff, have been wary of a sharp military escalation, warning it could further destabilize the Middle East at a time when President Trump has said he hopes to reduce the number of American troops in the region.

Still, American officials said Mr. Esper authorized planning for a new campaign inside Iraq — even as the military reduces its counterterrorism presence there — to provide options for Mr. Trump in the event that Iranian-backed militia groups escalate their own attacks against American troops, said two senior administration officials.

During an Oval Office meeting on March 19, Mr. Trump did not make a decision about whether he might authorize the new campaign in Iraq, but allowed the planning to continue, according to American officials.

A spokesman for the National Security Council declined to comment. Cmdr. Sean Robertson, a Pentagon spokesman, said in a statement: “Operation Inherent Resolve is in Iraq at the invitation of the Iraqi government and remains focused on partnering with Iraqi security forces for the shared goal of permanently defeating ISIS remnants. We are not going to discuss hypotheticals or internal deliberations.”

Several American officials said they were struck by the blunt tone of General White’s memorandum — sent on March 16, the day after he received the Pentagon directive to start the planning — which they said emphasized the costs and risks against an effort to try to destroy the militia group, known as Kataib Hezbollah.

The memo also pointed out that such a campaign might run afoul of the current agreement with the Iraqi government that allows American troops to operate in the country.

Beyond that, it would most likely put the Iraqi leadership and especially its military in the position of having to choose between its American allies — whose leaders are far away — and the Iranians, whom many senior Iraqis do not like but believe they have to live with because they are neighbors.

“Iraq cannot be a victim of the Iranian-U.S. conflict, because that would end up going in favor of Iran,” said Karim al-Nuri, a senior figure in the Badr Organization, an Iranian-backed militia, meaning that it would force Iraq closer to Iran.

Iran has long used Shiite militia groups in Iraq as proxy forces both to battle American and Iraqi troops and to exert political influence inside the government. Like Lebanese Hezbollah, Kataib Hezbollah has both military components and political operations, and links to Iraq politicians, businesses, charities and a web of other networks, several regional specialists said.

“It’s like a shadow state,” said Michael Knights, an analyst at the Washington Institute for Near East Policy, who has studied the group for more than a decade.

As a result, carrying out any large-scale plan to destroy Kataib Hezbollah poses huge political and security risks for the Trump administration, and practical challenges for the military.

It would also strain already frayed relations with Iraq’s weak central government. In January, members of Iraq’s Parliament called for the ouster of all U.S. troops in the country after the American drone strike at Baghdad’s international airport that killed Maj. Gen. Qassim Suleimani, a top Iranian commander, as well as Abu Mahdi al-Muhandis, the de facto leader of Iraq’s militia groups.

Several top American officials, including Mr. Pompeo and General Milley, have urged the Iraqi security forces to crack down on rogue Shiite militia groups that are attacking American troops, or else the United States will be forced to retaliate.

The Pentagon directive ordered planners at the military’s Central Command and in Iraq to draw up a strategy to dismantle the militia group’s operations, according to several American officials who saw the order or were briefed on it. The directive said that Iranian paramilitary forces — members of the Islamic Revolutionary Guards Corps — could be legitimate targets if they are located with the Kataib Hezbollah fighters.

Kataib Hezbollah rocket attacks killed two American troops and one British soldier at a military base this month — prompting a reprisal strike by American warplanes one day later.

Even so, American officials said there was no firm evidence that Iran ordered the attack by the militia group. But Mr. Pompeo and other senior officials in recent weeks have argued for aggressive military action not only against Kataib Hezbollah but also against Iranian military forces.

During a White House meeting on March 12, Mr. Esper and General Milley argued for a more limited response to the rocket attacks — a view that prevailed on Mr. Trump, who ordered nighttime raids on five suspected weapons depots in Iraq used by Kataib Hezbollah.

Several American officials said there was an increased urgency in planning attack options against Kataib Hezbollah as the group, perhaps along with other Shiite militias, has threatened to ramp up strikes against U.S. troops stationed on Iraqi bases after the celebrations for Nowruz, the Iranian New Year, end soon. American military intelligence agencies have detected signs that big attacks could be in the works, according to a senior U.S. military official who has been briefed on some of the contingency planning in Iraq.

Kataib Hezbollah, in a statement on Wednesday, warned its fighters to prepare for possible attacks from the United States, and threatened to retaliate against Americans and any Iraqis who help them. “We will respond with full force to all their military, security, and economic facilities,” said the statement, according to SITE, a private company that monitors jihadists’ websites and postings.

The immediate targets of a Pentagon campaign against Kataib Hezbollah most likely would be the group’s leadership, bases and weapons depots, Mr. Knights said. In addition to a vast array of rockets, the group is believed to have access to a hidden arsenal of short-range ballistic missiles funneled into Iraq by Iran over the past several months, according to American intelligence and military officials.

An extended campaign could hit militia targets across a wide swath of Iraq and Syria, and possibly other Shiite militias in Iraq that are loosely aligned with Kataib Hezbollah. “You can’t just hit rank-and-file fighters, you’d have to hit leadership, most of whom have probably dispersed,” Mr. Knights said.

At the same time, American officials said the risks laid out in General White’s memo are genuine, and some military planners believe it would be foolish for the Trump administration to escalate military operations inside Iraq anytime soon.

More than 5,000 American troops are currently stationed in Iraq, most of them part of the mission to train and advise Iraqi security forces in the mission against the Islamic State. Pentagon officials had been seeking to reduce that presence to about 2,500 troops in the coming months.

Any campaign against Kataib Hezbollah is likely to draw from the roughly 70,000 American military personnel currently deployed around the Middle East, including in Saudi Arabia and other Persian Gulf nations. More than 14,000 of those troops have moved into the region since last May amid rising tensions with Iran.

The Pentagon has also sent Patriot air and missile defense batteries, B-52 bombers, a carrier strike group, armed Reaper drones and other engineering and support personnel.

Commanders are still rushing more Patriot antimissile batteries and other weaponry into Iraq, but are still a week or two away from having the additional defensive systems in place there, a senior U.S. military official said.

In recent weeks, as the threat from militia attacks and exposure to the coronavirus has increased, the United States and its European allies have been turning over smaller coalition bases to their Iraqi counterparts, and either moving to a handful of larger Iraqi bases or leaving the country altogether.

Speaking to reporters the day after the United States hit the five Khatib Hezbollah weapons depots this month, Gen. Kenneth F. McKenzie Jr., the head of Central Command, said that the threat from Iran and its proxies remained “very high” and added that tensions “have actually not gone down” since the United States killed General Suleimani.

While American officials say they have no clear evidence that Iran specifically directed the deadly attack on Camp Taji on March 11, they say that Kataib Hezbollah and the Iranian Quds Force coordinate closely.

Mr. Esper suggested on Wednesday that the United States could respond further to the militia’s rocket attacks, but offered no details.

“You don’t get to kill or wound Americans and get away with it,” Mr. Esper said in an interview with NPR. “We will respond at the time, place and manner of our choosing. We will hold them accountable.”