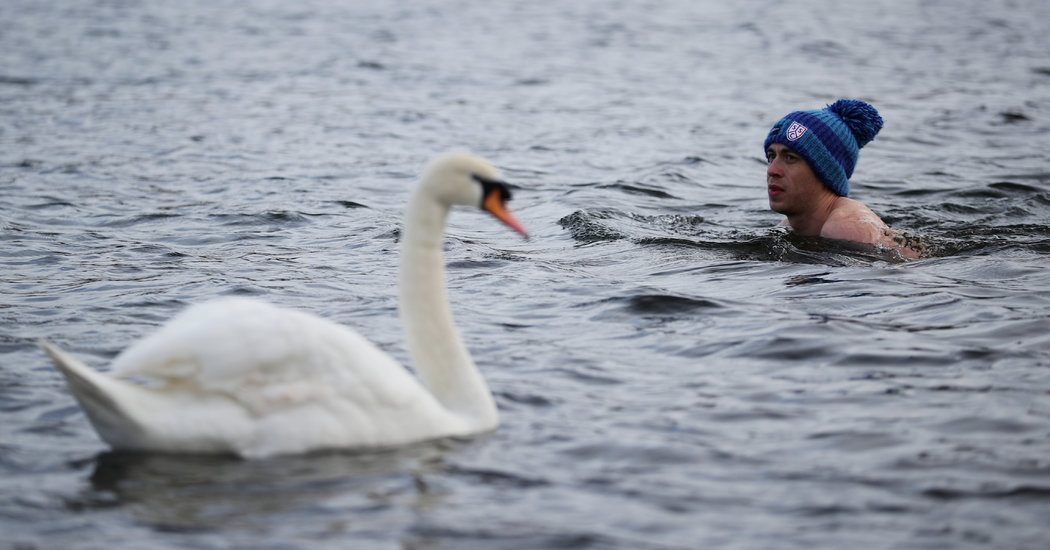 In a different world, we’d be talking about golf and tennis, trades and drafts, sign stealing and beanballs. In this world, we’re talking about swimmers looking for places to swim, announcers providing play-by-plays on dogs eating dinner, and soccer players posing for pregame photos while wearing masks.

Swimmers are getting creative.

With most pools closed, many swimmers have become desperate.

Phoebe Bacon, a member of the U.S. national swim team, found solace in a teammate’s backyard pool. It was only 15 meters long, 10 meters shorter than a normal training pool, but it did the trick. Her coach, Tim Kelly, tethered her to a diving board to add some resistance.

Nathan Adrian, a five-time Olympic gold medalist, trained in a 3-foot-deep pool used by the swim school he runs. It’s not ideal for Adrian, who is 6-foot-6.

Those who couldn’t find an open pool began to feel like fish out of water.

Yasmin Rieger, a member of the Wagner College triathlon team, practiced her stroke on dry land by lying down on a stool. She attached her paddles to strength cords and had someone throw water on her.

Bree Soileau, a swim coach and triathlete from Texas, took to the bathtub with her fins. She has also posted videos showing swimmers how to practice rhythmic breathing in the shower.

Preston Planells, a swimmer at the University of Iowa, did the 200-meter backstroke on his hardwood floor. Brock Brown of Indiana University raced dogs through the snow. The olympians Ryan Murphy and Josh Prenot pushed a car up the hill for their dry-land training. DANIELLE ALLENTUCK

Commentary is a sport, right?

In case you missed it, The Times covered an idle rugby announcer who creatively turned his skills to announcing ordinary human activity: a trip to a discount store, a kick-around in a park.

There are other announcers out there with time on their hands. The N.F.L. and baseball announcer Joe Buck jumped into quotidian announcing, turning his attention to a marble race, a dog with a toy football, and baking and grilling.

The basketball announcer Mike Breen went to earnest route, with a heartfelt plea for N.B.A. fans to wash their hands and practice social distancing.

The games continue in Nicaragua.

Nicaragua recorded its first coronavirus death on Thursday. Schools remain open in the country, and the Nicaraguan soccer league is still pressing on, without fans in attendance.

All 10 teams are set to play this weekend, even as some disagree with the decision to continue playing.

Diriangén, currently second in the league, posed for a pregame photograph on March 21 with 10 of the players wearing masks (the goalkeeper, for whatever reason, did not). Bernardo Laureiro, a player on the team, wrote on Twitter: “I don’t want to play, and I don’t understand my colleagues who don’t say anything. We are the protagonists, no one else. If a team has 30 players, and the 30 say they don’t want to play, don’t play and that’s it.”

On social media, Nicaraguans have been sharing the ironic meme, “Be like Ortega” to encourage people not to go out. President Daniel Ortega has not been seen in public since February.

The weekend that would have been.

If it isn’t too painful, consider the weekend that might have been …

The N.C.A.A. tournaments for men and women would have advanced to the regional finals that determine the Final Four. Will Sabrina Ionescu and Oregon get their chance at the big show?

The Houston Astros, beginning a yearlong tour as baseball’s villains, would play at the Los Angeles Angels, and the Twins would play the A’s in a matchup of 2019 playoff teams.

N.B.A. games would include Bucks at Mavericks, and Timberwolves at Celtics. Panthers at Bruins would top the N.H.L. weekend slate, as teams jockey for playoff seeding.

The W.G.C.-Match Play would be played in Austin., and the Indian Premier League of cricket would be getting underway too. Olympic qualifiers would continue, with the United States men’s team battling to qualify in an eight-team soccer tournament in Mexico.

And soon we’d be watching the Final Four, the Masters, the Indy 500, the Triple Crown, the Champions League final and a glorious spring of sports.

Oy. Back to reality, where at least we can watch soccer announcer Ian Darke call himself kicking a ball into a net.

“Try to say sane, everybody,” Darke says after scoring a goal … on himself. “I obviously haven’t.”